Comments (0)
Add to wishlistDelete from wishlist
Cite this document
Summary
Influenced by Chinese fashion from as early as the 5th Century BC, the Kimono gained rapid recognition as a stylized garment through the centuries. During modern times,…
Download full paperFile format: .doc, available for editing
HIDE THIS PAPERGRAB THE BEST PAPER94.1% of users find it useful 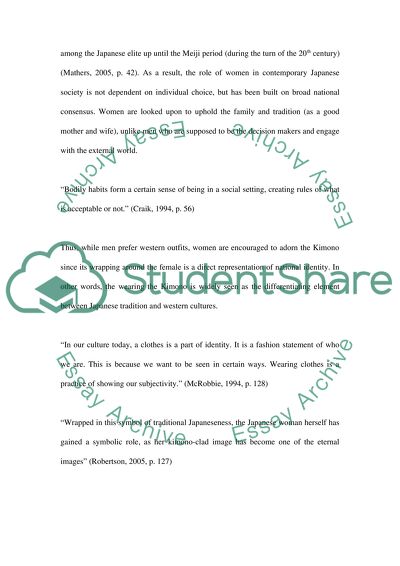 Kimono: National Identities and tradition in Japan The Kimono is a traditional Japanese garment worn by both men and women, especially during festiveoccasions. Influenced by Chinese fashion from as early as the 5th Century BC, the Kimono gained rapid recognition as a stylized garment through the centuries. During modern times, the Kimono has emerged as the national costume of Japan and is largely considered a feminine garment. This paper describes the transition of the Kimono as a symbol of national identity and its impact on gender identities in this context.
Modern Japanese people are highly westernized and prefer a similar type of clothing. As a result, wearing traditional garments such as the Kimono are largely restricted to certain festive or special occasions. Chambers (2007, p. 64) says that Japanese national identity can be established through two primary dimensions: Cultural identities and the distinction between traditional and modern practices. Although worn by men, women and children, the Kimono has always been the marked attire worn by Geishas (traditional dancers) and is also worn by women during their coming-of-age ceremony (held around the age of 20).
The goal of characterizing the Kimono as feminine attire can be traced to the cultural renaissance initiated during the Tokugawa era (17th-mid 19th centuries). This persisted among the Japanese elite up until the Meiji period (during the turn of the 20th century) (Mathers, 2005, p. 42). As a result, the role of women in contemporary Japanese society is not dependent on individual choice, but has been built on broad national consensus. Women are looked upon to uphold the family and tradition (as a good mother and wife), unlike men who are supposed to be the decision makers and engage with the external world.
“Bodily habits form a certain sense of being in a social setting, creating rules of what is acceptable or not.” (Craik, 1994, p. 56)
Thus, while men prefer western outfits, women are encouraged to adorn the Kimono since its wrapping around the female is a direct representation of national identity. In other words, the wearing the Kimono is widely seen as the differentiating element between Japanese tradition and western cultures.
“In our culture today, a clothes is a part of identity. It is a fashion statement of who we are. This is because we want to be seen in certain ways. Wearing clothes is a practice of showing our subjectivity.” (McRobbie, 1994, p. 128)
“Wrapped in this symbol of traditional Japaneseness, the Japanese woman herself has gained a symbolic role, as her kimono-clad image has become one of the eternal images” (Robertson, 2005, p. 127)
Nevertheless, the use of Kimono has waned over the decades primarily due to western influences and the high level of maintenance required to clean and preserve the garment. Efforts are often underway to revive the tradition and increase the use of the Kimono among the younger generation. According to Fong, M. ad Chuang (2004, p. 96), the required training in etiquette and manners that one needs to demonstrate when wearing a Kimono is a factor that has led to its declining use. Moreover, Rucker (1999, p. 78) found Japanese women to be more willing to invest time in learning to wear the Kimono.
“I think Japan is always following the U.S., following your system and maybe your way of thinking. I want to think though that we shouldn’t abandon our traditional feelings. We want to get rid of discrimination or unfair things but good things like modesty, that kind of feeling, I want to stay in Japan.” (Chambers, 2007, p. 146)
This combined with the greater respect for the garment in the society, have led to the Kimono’s characterization as the symbolic garment of the Geisha profession. Robertson (2005, p. 105) argues that the Kimono encourages the feeling of collective action and thus helps uphold the decorum during important gatherings. In essence, it can be concluded that the Kimono has emerged as a medium for one to express their beliefs in Japanese culture and related societal conventions.
References
Chambers, V., 2007. Kickboxing geishas: how modern Japanese women are changing their nation. University of Virginia.
Craik, J., 1994. The Face of Fashion: Cultural Studies in Fashion. London: Routledge.
Fong, M. and Chuang, R., 2004. Communicating ethnic and cultural identity. New York: Rowman & Littlefield.
Mathers, G., 2005. Global Culture/Individual Identity: Searching for Home in the Cultural Supermarket. London: Routledge.
McRobbie, A., 1994. Postmodernism and Popular Culture. London: Routledge.
Robertson, J., 2005. A companion to the anthropology of Japan. Boston: John Wiley.
Rucker, et al., 1999. Clothing, Power and the Workplace. Oxford: Berg. Read More
Share:
Tags
Cite this document
(“How the Kimono represented Japanese tradition and national identity Outline”, n.d.)
How the Kimono represented Japanese tradition and national identity Outline. Retrieved from https://studentshare.org/miscellaneous/1590485-how-the-kimono-represented-japanese-tradition-and-national-identity-and-how-it-has-changed-overtime

“How the Kimono Represented Japanese Tradition and National Identity Outline”, n.d. https://studentshare.org/miscellaneous/1590485-how-the-kimono-represented-japanese-tradition-and-national-identity-and-how-it-has-changed-overtime.
Comments (0)
Click to create a comment or rate a document

A comparison between the Japanese kimono and Chinese robe

...of these garments are very old and carry with it a long lost historical angle to it. Figure 1: Kimono Segments (hanamiweb.com) Kimono, a piece of clothing, is not just a form of dressing among the Japanese but is also a clear-cut manifestation of how the Japanese history has evolved over time. The style of Kimono has been altered from one age to that of another and it has undergone changes throughout its history and has finally attained a form today. Goldstein-Gidoni (1997, p. 35) comments “The word kimono used in contemporary...
5 Pages(1250 words)Research Paper

...language and literacy levels (Burgess 143). Due to these changes brought by the mobile phones in the society, the device is loved by many and is blamed by some for increasing ills in the society. Factors that represents that how cell phones have changed the society Safety: The safety concern of people regarding their near and dear ones has been addressed by cell phone quite effectively. Earlier, when children or other members of the family used to get stuck in traffic or get engaged in any other unexpected work, they faced problems conveying the message to their family at home. But, with the advent of cell-phone technology, they can call at any time to...
5 Pages(1250 words)Essay

...?How civil war changed families. Hundreds of women on both sides in the American Civil War took on male s and appearances, so that they could join the fight for their respective sides. Some saw it as an adventure, but there was also the question of pay and freedom. Why should only men be able to fight for what they believed in? Also of course a soldier earned roughly double what any woman, whatever her profession or trade, could earn at the time. A ‘man’ had freedom which a woman could not enjoy, so some of these women kept up the pretence for the rest of their lives, although the majority were spotted at some early point. Jenny Hodgers was one of the women who believed that there were more opportunities...
5 Pages(1250 words)Assignment

...?Sur Lecturer How WGN changed broadcasting Broadcasting is the business that involves the media to reach a fan base with relevant broadcast material that can be consumed by the listeners or the viewers. In the past, when there were no technological equipment, broadcast stations found it hard to set up systems of broadcast that would reach the requirements of the audience. The WGN came up at around this time to bring about change in the way the broadcasting affairs were conducted. This paper is going to analyze three major changes implemented by WGN so as to basically change the whole of broadcasting platform such as being the first station to air...
5 Pages(1250 words)Research Paper

Subculture identity how the tradidiontal costume keeps their own culture nowadays

...  English 27th November, How Facebook Changed the World – The Arab Spring The Arab spring is a term given to the Arab revolution, which came due to economic and political dissatisfaction of the people. This revolution resulted in a social crisis and was majorly facilitated by use of social media. People were able to voice their dissatisfaction message across the Arab world. The political leadership of Arab nations was under pressure that was facilitated by this social media agitation. In this aspect, political and social crisis engulfed these nations due to the fact that activists used facebook to enlighten and create awareness among the citizens. This enabled a serious information flow to the population and creating awareness... is...
5 Pages(1250 words)Essay

How have media technologies changed our experience of space, and how have these changes been represented

...in each artistic medium did not contradict standards of rationality. Rutsky (1999) mentioned that contents of traditional media represented perennial happiness and perceptive inclination of both artists and audiences. Those perceptive inclinations constrict individuals to adopt a uniform rationality of ideas contained in media channels. However, contemporary media possess substantial difference from its traditional versions. Today, incorporation of technology in media has significantly changed the audiences’ perception of space and time. Media technologies today are constantly evolving. Consequently, contents of media continue affecting audiences’ lives...
11 Pages(2750 words)Essay

How is gender represented/constructed/performed in ________

...How Gender is Represented/Constructed/Performed in Public Spaces Introduction In this world today, the public spaces play quite a significant role in the economic and social life of the different communities of the world. Big town and major cities of the world have all kind of public spaces and meeting spaces which are quite significant social resources (Innes and Jones, 2006, p. 12). The public spaces in this context include places where people adversely converge; the street markets, street parks, playgrounds, residential areas, neighborhood areas, shopping stalls and the high streets. The public spaces also include the ‘micro spaces’; street corners and stairwells spaces that are characterized as...
9 Pages(2250 words)Essay

How each text helps define national identity or solidarity

The Japanese Kimono and the Chinese Robes: Anthropological and Historical Context

...that are fundamentally all one size for both men and women. While silk kimonos are traditional garments in Japan, Chinese have Cheongsam as their traditional Chinese garment (Garrett, 1998). Both of these garments are very old and carry with it a long lost historical angle to it. Figure 1: Kimono Segments (hanamiweb.com) Kimono, a piece of clothing, is not just a form of dressing among the Japanese but is also a clear-cut manifestation of how the Japanese history has evolved over time. The style of Kimono has been altered from one age to that of...
7 Pages(1750 words)Research Paper
sponsored ads
Save Your Time for More Important Things
Let us write or edit the outline on your topic "How the Kimono represented Japanese tradition and national identity and How it has changed overtime" with a personal 20% discount.
GRAB THE BEST PAPER

Let us find you another Outline on topic How the Kimono represented Japanese tradition and national identity and How it has changed overtime for FREE!