Comments (0)
Add to wishlistDelete from wishlist
Cite this document
Summary
Cell phone is one of the wireless communication technologies that “facilitate discussion about mitigation efforts, identification of potential hazards, connectivity between response organizations of all types, warning messages to the public, and diffusion of important disaster…
Download full paperFile format: .doc, available for editing
HIDE THIS PAPERGRAB THE BEST PAPER96.3% of users find it useful 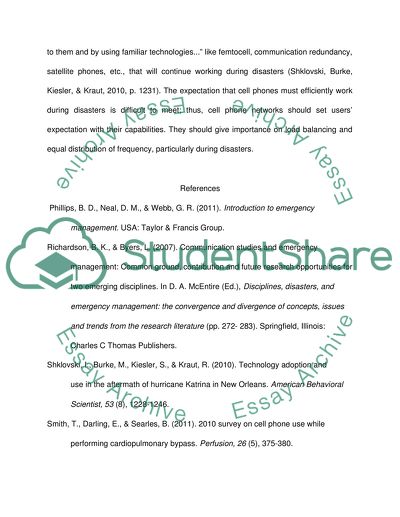 1. Many disaster drills start with the assumption “cell phones don’t work.” How accurate is this assumption, and what is the basis for your answer? Cell phone is one of the wireless communication technologies that “facilitate discussion about mitigation efforts, identification of potential hazards, connectivity between response organizations of all types, warning messages to the public, and diffusion of important disaster information” (Richardson & Byers, 2007, p. 275). However, during the aftermath of unexpected events like disasters, cell phones are not working or inoperable, thus, leaving everything in chaotic situations. The heavy traffic or limited usage of cell phone networks during disasters can be attributed to technical limitations like system overloading or overuse, and height signal because of destroyed or damaged networks. This scenario has been observed every time there is a disaster; thus, this event deserves to be a part of disaster drills. Disaster drills are created for disaster mitigation and successful response, and it is just right to start with the assumption “cell phones don’t work.” Cell phones are wireless communications that have wide geographical connectivity and “multiple modes of communication” (i.e. internet, e-mail, texting, & making calls) (Smith, Darling, & Searles, 2011, p. 378). Normally, a rapid exchange of quality information is happening when disaster hits because there is a strong demand for an instant reconnection/messaging, tracking locations, and other disaster responses (Phillips, Neal, & Webb, 2011, p. 412). However, it is discouraging that cell phones are not working when it is needed the most; hence, this assumption is accurate. Disaster drills that are based on this assumption are effective because they have “forced people to improvise by adopting technologies new to them and by using familiar technologies...” like femtocell, communication redundancy, satellite phones, etc., that will continue working during disasters (Shklovski, Burke, Kiesler, & Kraut, 2010, p. 1231). The expectation that cell phones must efficiently work during disasters is difficult to meet; thus, cell phone networks should set users’ expectation with their capabilities. They should give importance on load balancing and equal distribution of frequency, particularly during disasters.
References
Phillips, B. D., Neal, D. M., & Webb, G. R. (2011). Introduction to emergency
management. USA: Taylor & Francis Group.
Richardson, B. K., & Byers, L. (2007). Communication studies and emergency
management: Common ground, contribution and future research opportunities for two emerging disciplines. In D. A. McEntire (Ed.), Disciplines, disasters, and emergency management: the convergence and divergence of concepts, issues and trends from the research literature (pp. 272- 283). Springfield, Illinois: Charles C Thomas Publishers.
Shklovski, I., Burke, M., Kiesler, S., & Kraut, R. (2010). Technology adoption and
use in the aftermath of hurricane Katrina in New Orleans. American Behavioral Scientist, 53 (8), 1228-1246.
Smith, T., Darling, E., & Searles, B. (2011). 2010 survey on cell phone use while
performing cardiopulmonary bypass. Perfusion, 26 (5), 375-380.
2. Cellular companies are marketing 4G even though they don’t meet the standards for 4G. How does this impact the range of cellular device users?
People are becoming more and more dependent on wireless communication technologies for connectivity, and this trend will continue to evolve for many years to come. This growing trend has urged many cell phone companies to innovate and offer high speed wireless communication services to attract consumers. Devices using 4G LTE-Advanced system have high demand among users because the system offered high speed services (about 50 times) compared to its predecessors (2G & 3G). Cellular companies have been allowed by ITU-R to label their devices as 4G technologies, even though high standards and advanced features for 4G (i.e. data rates of 100 Mbps-1Gbps) are not actually delivered (Routray, 2010, p. 9). Since then, many users have complained that they are being fooled and deceived by cellular companies because “4G systems were not in place, and....the system did not fully comply with ITU 4G requirements” ever since it was released (Akyildiz, Gutierrez-Estevez, & Reyes, 2010, p. 218). They are buying 4G devices, but they are not getting the actual or real functions (e.g. high speed & reliable service) promised by 4G networks because technically they are 3G (Yager, 2010). For instance, Verizon Wireless has explained that the issue was “unforeseen, despite careful, diligent planning, deployment and ongoing upgrade programs” (Hood, 2011). In line with this incident, many cellular device users have expressed their dissatisfaction and discouragement on false advertising in various social networking sites and blogs, which could ruin companies’ reputation. Also, this issue has lowered the market confidence of users as companies take advantage of their preferences; thus, companies are planning to give different kinds of tokens to regain users’ trust, particularly those speed-conscious consumers.
References
Akyildiz, I. F., Gutierrez-Estevez, D. M., & Reyes, E. C. (2010). The evolution of 4G
cellular systems: LTE-Advanced. Physical Communication, 3, 217-244.
Hood, J. R. (2011). Verizon explains 4G outages...sort of. Consumer Affairs.
Retrieved from http://www.consumeraffairs.com/news04/2011/12/verizon-
explains-4g-outages-sort-of.html
Routray, S. K. (2010). Evolution of personal wireless broadband services from 3G to
4G. In S. Adibi & A. Mobasher (Eds.), Fourth-generation wireless networks: Applications and innovations (pp. 1-19.). USA: IGI Global.
Yager, F. (2010). 4G cell phone may not be a good investment. Consumer Affairs.
Retrieved from http://www.consumeraffairs.com/news04/2010/12/if-you-re-
getting-ready-to-pay-big-bucks-for-a-new-4g-phone-you-may-want-to-hold-off.html Read More
Share:
Tags
Cite this document
(“Emergency Management (Radio and cellular communications) Assignment”, n.d.)
Emergency Management (Radio and cellular communications) Assignment. Retrieved from https://studentshare.org/miscellaneous/1589005-emergency-management-radio-and-cellular-communications

CHECK THESE SAMPLES OF Emergency Management (Radio and cellular communications)

...?THE EMERGENCY MANAGEMENT PLAN Severe Weather Plan In case of severe weather such as thunderstorms, lightning, tornadoes, high winds, hurricanes, etc., special radio monitors tuned to the National Weather Service, located in incident command posts (ICPs) such as Director’s office, Police Office, Emergency Manager’s, Fire Department, Community Based Outpatient Clinics (CBOC’s), and in the Safety Office, will be activated to receive official weather advisories. The National Weather Service, through a Geographic Information System (GIS), can estimate the areas that can be hit by severe weather and inform the appropriate ICPs (US Fire Administration, 2011). In turn, the Director’s office shall contact the Gulf Coast health care system... , as...
4 Pages(1000 words)Case Study

...in regards to utilities or clean up. The Emergency Management Coordinator manages the flow of information between the various agencies and the PIO. The EOC will need sufficient communications systems to remain in contact with the PIO, and each should have a designated liaison. There should be only one spokesman for the government to reduce public confusion, and information needs to remain current and thorough. 5.) What line agencies will necessarily be involved in disaster recovery? What staff agencies? What are their respective roles during the recovery process? Line agencies will include the public utilities that need to restore power and energy, public works that...
2 Pages(500 words)Assignment

...for the purposes of disaster management wherein it can link the large number agencies involved in the dynamic task of providing relief to a multitude of people spread across the entire spectrum of the area affected in this case a British town which is without communications during a crucial period. A cellular network comprises of base stations, mobile telephone switching offices (MTSO), and mobile communication devices. The MTSO is the key to a cellular system. The base station has a radio transceiver and controller which provides radio communication in its cell. These cells are arranged in a honeycomb...
5 Pages(1250 words)Assignment

...Possible Cover page A Business Continuity Plan for General Motors in the Wake of the Havoc Wrecked on the Company’s Oklahoma Plant by Tornado in 2003 Introduction The Oklahoma City plant of General Motors that produced Sport Utility Vans was seriously destroyed by a ravaging tornado in 2003. Several parts of the plant were in disrepair and some of the employees were injured (USATODAY, 2003). Therefore, it is imperative that I present this Business Continuity Plan for our company so as to understand the issues surrounding the disaster as touching important concerns about human safety, property safety, loss prevention, sustainability of operations and the establishment of efficient communication channel... , was...
3 Pages(750 words)Essay

...Emergency Management The purpose of our local, and federal governing agencies is to prevent the humans from sufferings and also to protect their life and health. The prime responsibility of the government is to be prepared for disasters and to be in particular about the post disaster response. To avoid or reduce the duplication of their efforts and also to make their plan more realistic, government organisations can communicate and coordinate with other non governmental organisations also. Other than this, the emergency response teams must be kept well trained round the clock. Consistent testing and maintenance of warning systems will help a lot to minimize physical...
2 Pages(500 words)Essay

...Emergency Management Paper History of Disaster Relief The history of disaster relief in America s back to the 1800s. Indeed as a core man to the citizenry, the federal and state governments were looked on by citizens of America to provide relief in times of disaster – both natural and artificial. In the years before the 1950s however, the state and local government shared this role of providing disaster relief with other non-governmental agencies; notably the American Red Cross (ARC). One of the virtual moments in the history of American disaster relief history in relation to the role played by the American Red Cross was the Johnstown Flood of 1889. According to the Texas Impact (2008), at the time of...
8 Pages(2000 words)Research Paper

...-based approach. Haimes YY. Source Center for Risk Management of Engineering Systems, University of Virginia, PO Box 400736, Charlottesville, VA 22904, USA. haimes@virginia.edu Abstract The premise of this article is that risk to a system, as well as its vulnerability and resilience, can be understood, defined, and quantified most effectively through a systems-based philosophical and methodological approach, and by recognizing the central role of the system states in this process. A universally agreed-upon definition of risk has been difficult to develop; one reason is that the concept is multidimensional and nuanced. It requires an understanding that risk to a system is inherently and fundamentally a function of the...
5 Pages(1250 words)Essay

...resilience. The constrains experienced by the FRGs (First Responder Groups) on previous occasions due to insufficient radio frequency spectrum, capabilities of old equipments and lack of interoperability among them have taught a great lesson for imminent need for upgrading the communication networks. Conclusion: - Emergency Communication Planning is found to attract ongoing upgrading of skills and innovations. The work of disaster management team is heavy during disaster. But the strain of the team before and after disaster is hectic. This strain could well be alleviated by reducing the after strain, which could be achieved on careful observation of...
4 Pages(1000 words)Essay

...described the implimentataion of the new technology in police sector. According to (Joshi, 2008) it is a practical solution offered by mobile technology that is helping and will help in fighting against crime as well as powerfully utilize the city resources. Joshi (2008) has presented a new type of technology that is currently implimented for the police commucantion network. This technology is acknowledged as the Wi-Max mobile technology that has the communication ranges from police’s internal point-to-point links to complete mobile cellular-type access. It will be included by the department's already operational systems, offering a greater and faster broadband access police emergence...
12 Pages(3000 words)Term Paper
sponsored ads
Save Your Time for More Important Things
Let us write or edit the assignment on your topic "Emergency Management (Radio and cellular communications)" with a personal 20% discount.
GRAB THE BEST PAPER

Let us find you another Assignment on topic Emergency Management (Radio and cellular communications) for FREE!