Comments (0)
Add to wishlistDelete from wishlist
Cite this document
Summary
The company has thousands of coffee shops distributed all over the world. Most of the coffee shops are located in U.S and U.K. For every cup of coffee sold by Starbucks, there are underlying costs to the environment. It is…
Download full paperFile format: .doc, available for editing
HIDE THIS PAPERGRAB THE BEST PAPER91.6% of users find it useful 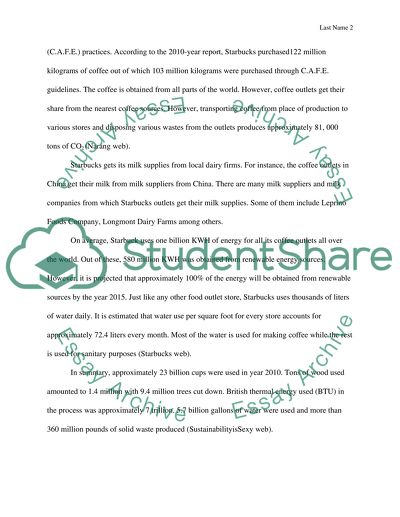 Environmental Science Lab Starbuck is the global leader in coffee retailing. The company has thousands of coffee shops distributed all over the world. Most of the coffee shops are located in U.S and U.K. For every cup of coffee sold by Starbucks, there are underlying costs to the environment. It is therefore important to make an evaluation of the processes and materials used to get the coffee on the table with an aim of determining with certainty the amount of environmental impact of these coffee shops.
Most of the coffee cups sold by Starbuck coffee outlets all over the world including Denver Colorado are made of paperboard. The constituent materials include trees, ink, plastics. The process of making the paper cups uses multiple fuels. 0.11 Kg of CO2 is used when a cup measuring 16 ounce is transported from manufacturing site to the retail outlets. For every cup made and shipped to a coffee outlet 0.09 m2 of natural habitat is lost. However, it costs 0.27 Kg of plant and animal life potential to manufacture and ship the same size of cup to its final destination. Ideally speaking, it would take approximately 1.7 billion cups together with their sleeves to trigger one-potential species extinction (Starbucks web). The cups however, have approximately 10% post-consumer recyclable material. The cups are manufactured using bleached paperboard. This is in accordance to the requirements of FDA regulations. However, the cups are laminated with a polyethene referred to as resin. It is argued that the resin in the paper cups is not environmental friendly. When poorly decomposed, it produces greenhouse gas that is believed to trap more than 20 times the heat trapped by CO2 (Narang web).
Coffee is the primary ingredient for coffee drinks. Starbucks consumes approximately 2% of global coffee production. Most of the coffee is sourced through Coffee and Farmer Equity (C.A.F.E.) practices. According to the 2010-year report, Starbucks purchased122 million kilograms of coffee out of which 103 million kilograms were purchased through C.A.F.E. guidelines. The coffee is obtained from all parts of the world. However, coffee outlets get their share from the nearest coffee sources. However, transporting coffee from place of production to various stores and disposing various wastes from the outlets produces approximately 81, 000 tons of CO2 (Narang web).
Starbucks gets its milk supplies from local dairy firms. For instance, the coffee outlets in China get their milk from milk suppliers from China. There are many milk suppliers and milk companies from which Starbucks outlets get their milk supplies. Some of them include Leprino Foods Company, Longmont Dairy Farms among others.
On average, Starbuck uses one billion KWH of energy for all its coffee outlets all over the world. Out of these, 580 million KWH was obtained from renewable energy sources. However, it is projected that approximately 100% of the energy will be obtained from renewable sources by the year 2015. Just like any other food outlet store, Starbucks uses thousands of liters of water daily. It is estimated that water use per square foot for every store accounts for approximately 72.4 liters every month. Most of the water is used for making coffee while the rest is used for sanitary purposes (Starbucks web).
In summary, approximately 23 billion cups were used in year 2010. Tons of wood used amounted to 1.4 million with 9.4 million trees cut down. British thermal energy used (BTU) in the process was approximately 7 trillion. 5.7 billion gallons of water were used and more than 360 million pounds of solid waste produced (SustainabilityisSexy web).
Works Cited
Narang, Sonia. Carbon With That Latte?Forbes.2012. Web 03, February 2012 http://www.forbes.com/2007/07/02/starbucks-emissions-environment-biz-cz_sn_0703green_carbon.html> Starbucks. “Starbucks Global Responsibility Report; Goals & progress report 2010”. Starbucks. Web 03, February 2012. http://www.starbucks.com/responsibility/learn-more/goals-and-progress/energy#open> SustainabilityisSexy.com. The Basic Problem with Coffee Cups. Sustainability is Sexy. 2009. Web 03, February 2012. Read More
Share:
Tags
Cite this document
(“ENVIRONMENTAL SCIENCE LAB Research Paper Example | Topics and Well Written Essays - 500 words”, n.d.)
ENVIRONMENTAL SCIENCE LAB Research Paper Example | Topics and Well Written Essays - 500 words. Retrieved from https://studentshare.org/miscellaneous/1588645-environmental-science-lab

... _____________________________ Lab 5: Food Systems Introduction: “The Problem: Money is power. Perhaps more than any generation that has come before us, we understand the deeply-rooted reality of this short phrase and its universal meaning for every human being living on this planet. It follows that wherever large amounts of money collect, so also new centers of power form. The latest historical manifestation of this is the modern corporation. As trillions of dollars accumulate in the corporate sphere, we witness the growing power of corporation to shape the world as they see fit. This power is not limited to controlling the face of our own government through consistent, record-breaking, campaign contributions, but also the fate... , and...
1 Pages(250 words)Research Paper

...Food and environment In the last two days, I have taken breakfast at home, which included a glass of milk and some cereals. I took mango juice from the canteen at tea break on the first day, and a piece of cake on the second day. I skipped lunch on the two days but enjoyed a cup of white tea at 4 pm. Dinners were rather early and since I love red meat, I cooked it with rice and kept the left over in the fridge, which I consumed on the second day. The eating habits I have adopted have both positive and negative effects on the environment. First, eating animal products such as meat and milk increases carbon emissions in the environment. This is because of production of commercial livestock, and processing of the same, which consumes...
2 Pages(500 words)Assignment

...buildings would be friendly to the environment. Additionally, if a demolition must be done, recycling of materials is necessary for a sustainable environment. Works Cited Alliance for Sustainable Colorado. “Advancing Sustainability through Collaboration: Designing the Future” 2012.Web 2 March 2012. http://sustainablecolorado.org/blog/energy/alliance-center-designing-the-future Journal Entry; Energy Natural gas is the cleanest-burning conventional fuel, producing lower levels of greenhouse gas emissions than heavier hydrocarbon fuels such as coal and oil. Energy has many uses like transportation, cooking, lighting, and turning engines. Efficiency, affordability, and environmental conservation are some of the factors we...
2 Pages(500 words)Essay

..., and agroforestry (Wright & Boorse, 2010). However, if the trend of human development persists, then the groundwater will absolutely reduce further. Likewise, the intrusion of ocean water into ground water will be inevitable. This way, the groundwater will become more salty. Reference Wright, R. T.,& Boorse, D. F. (2010). Environmental Science: Toward a Sustainable Future. (11th ed.) White Plain, NY: Addison Wesley.... above billion, which did not require massive pieces of land to be cultivated to feed it since the lifestyle then was mainly hunting and gathering. Between 1900 and 2000 the world’s population increased by six billion and industrialization was at its peak (Wright & Boorse, 2010). Vast piece of land has been cleared to...
1 Pages(250 words)Assignment

...% of the greenhouse gases and it needed in bulk. In comparisons of the two in terms of energy potential, nuclear produces 10100 energy from an equivalent 1 kg of both. Therefore, there is no doubt nuclear potential is very impressive, but the two have got environmental impacts that needs thorough consideration (Caldicott, 2007). Hypothesis/Predicted Outcome Nuclear energy is safer and cleaner than coal Methods For this research, the main methodology for data collection was animation from MUSE lab. After login, data was collected in accordance with the time changes along the time frame. The data on the quantity of carbon, sulphur, amount of both uranium and coal needed, and...
1 Pages(250 words)Assignment

...Identifying Environmental Hazards Identifying Environmental Hazards Purpose To identify the impact of invasive species to the ecosystems, especially Zebra and Quagga Introduction Invasive species have posed a threat to the ecosystem in several ways. In some instances, they outcompete indigenous species for space and nutrients and at the same time they can spread diseases. Zebra and Quagga have demonstrated that they severely compete for phytoplankton with other organisms in the ecosystem, which result in alteration of the food web. The far reaching impact of these invasive species can lead to extinction in the long run. Further, the only alternative way to solving this, is by getting reed...
1 Pages(250 words)Assignment

Let us find you another Research Paper on topic ENVIRONMENTAL SCIENCE LAB for FREE!