Comments (0)
Add to wishlistDelete from wishlist
Cite this document
Summary
The Government Accounting Standards Board (GASB) is responsible for standards that are important for reporting of finances and developing accounting standards for local governments and state. Therefore, when the body issued exposure drafts for comment, far-reaching benefits…
Download full paperFile format: .doc, available for editing
HIDE THIS PAPERGRAB THE BEST PAPER92.6% of users find it useful 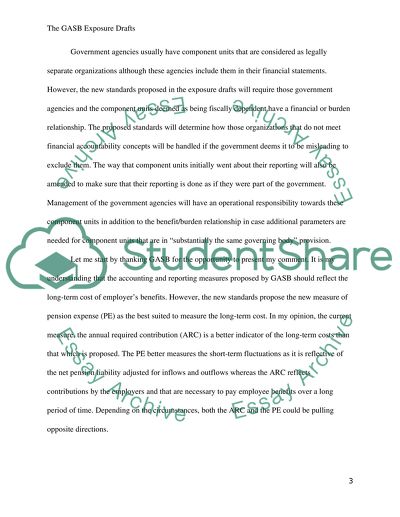 Extract of sample "Responding to GASB request for the Public Comment"

Running Head: The GASB Exposure Drafts The GASB Exposure Drafts The GASB Exposure Drafts The Government Accounting StandardsBoard (GASB) is responsible for standards that are important for reporting of finances and developing accounting standards for local governments and state. Therefore, when the body issued exposure drafts for comment, far-reaching benefits abound for the citizenry. The major reason why these exposure drafts are offered for public comment is for those concerned to give their thoughts on the drafts so that they can be considered. Furthermore, since the documents affect the general public, it is important that the public get the chance to comment on them so that unintended consequences do not occur. It is also a very good avenue for a person to exercise his/her rights as the law demands that the exposure drafts be availed to them. Another benefit of providing public comment is for the practicality of the changes recommended to be assessed by the general public and experts alike.
The critical elements of the draft are that a sole or agent employer should on its basic financial statement show a net pension liability that is a result of the pension liability less the value of net assets available to pay for pension benefits and also that the calculation of the pension liability should be made in accordance with the individual level-percent-of-pay entry age normal funding method (Buck Research, 2011). These elements are not present in the current standards and allow pension information or any other supplementary information that may be required to be presented in notes. They also allow for the use of a number of funding methods to be used when doing accounting disclosures which was not permitted in the previous standards.
Government agencies usually have component units that are considered as legally separate organizations although these agencies include them in their financial statements. However, the new standards proposed in the exposure drafts will require those government agencies and the component units deemed as being fiscally dependent have a financial or burden relationship. The proposed standards will determine how those organizations that do not meet financial accountability concepts will be handled if the government deems it to be misleading to exclude them. The way that component units initially went about their reporting will also be amended to make sure that their reporting is done as if they were part of the government. Management of the government agencies will have an operational responsibility towards these component units in addition to the benefit/burden relationship in case additional parameters are needed for component units that are in “substantially the same governing body” provision.
Let me start by thanking GASB for the opportunity to present my comment. It is my understanding that the accounting and reporting measures proposed by GASB should reflect the long-term cost of employer’s benefits. However, the new standards propose the new measure of pension expense (PE) as the best suited to measure the long-term cost. In my opinion, the current measure, the annual required contribution (ARC) is a better indicator of the long-term costs than that which is proposed. The PE better measures the short-term fluctuations as it is reflective of the net pension liability adjusted for inflows and outflows whereas the ARC reflects contributions by the employers and that are necessary to pay employee benefits over a long period of time. Depending on the circumstances, both the ARC and the PE could be pulling opposite directions.
Reference
Buck Research (2011). GASB Issues Exposure Drafts of Amended Standards for Public Retirement Systems. FYI (for your information) 34: 61, August 2 Read More
Share:
Tags
Cite this document
(“Responding to GASB request for the Public Comment Research Paper”, n.d.)
Responding to GASB request for the Public Comment Research Paper. Retrieved from https://studentshare.org/miscellaneous/1586713-responding-to-gasb-request-for-the-public-comment

...? Government accounting standards board of the due: Benefits of the exposure draft Exposure drafts are government documents that are released by the financial accounting standards board for public comments of the proposed new standards. This is based on the fact that these changes might have a far reaching effects, making it is necessary to consider public response, to ensure that unintended consequences do not result from the new standards. Through this mechanism, governments are able to minimize various mistakes that might result from the previous drafts (GASB, 2011). Therefore, it is greatly relevant to release the exposure drafts for public commentary...
4 Pages(1000 words)Essay

Public Opinion and Responding to Crisis

...?Public Opinion” & “Responding to Crisis Explain the potential value of public opinion to decision making and problem solving as a school administrator. In the eleventh chapter of the book, Kowalski (2007) bring out the importance of the role of the public in the management and administration of the school. Clearly, there is a definitive description given to why the school is not just an organization but a system through the collective role of various stakeholders including the public play in the success running of the school. For instance, the value of the role played by parents who form Parents Association in the school is felt through the decision they...
3 Pages(750 words)Essay

...? PUBLIC OPINION & RESPONDING TO CRISIS A crisis is an unstable condition or situation or a stage in a series of events at which the inclination of future events, in most cases for the worst, is determined. How issues are handles at this stage, is very vital in determining the extent to which the future events may be favorable or unfavorable. In chapter 13 of his book, where he was addressing the issue on responding to crisis, Theodore Kowalski referred to the suicide at McKinley middle school (Kowalski, 2010). This book focuses on how schools administrations can build a positive relationship not only with the students but with the entire community and stakeholders through effective...
3 Pages(750 words)Essay

Public Opinion and Responding to Crisis

...as a system of institutional transformation. In his work, Kowalski creates the awareness to the fact there are three major identified departments or stakeholders in the school management system and that the individual roles played by each of these departments needs to be harnessed and coordinated in such a way that they each become dependant on the other for the common goal of transforming lives through the school. These stakeholders are the staff, parents and students. In the case of the suicide at McKinley Middle School, there could be a thorough discussion of how the roles of each of these stakeholders could best be played from the perspective of public opinion and response to crisis to salvage future occurrences or...
3 Pages(750 words)Essay

How governmental entities will be affected by GASB pronouncement

...number Accounting Foundation established the Governmental Accounting Standards Board as the primary standard setter for GAAP for governmental entities. Under the jurisdiction agreement, the GASB has the primary responsibility for establishing accounting and reporting principles for government entities. The GASB’s first action was to issue a statement which recognized the NCGA’s statements and interpretations and the AICPA’s audit guide as authoritative. While the quick answer to the question of who sets accounting principles for governments is the Governmental Accounting Standards Board, GASB sets these accounting principles and provides interpretations and implementation guidance...
4 Pages(1000 words)Research Paper

Principles and Foundations of Physical Education

Responding to the Public

...Responding to the Public 2 The Incident 2 The Hidden Factors 3 The Response of the Medical Community 4 The Aftermath 5 Conclusion 5 Bibliography... ...
6 Pages(1500 words)Essay

... Pollution and the Environment Explain the concept of "negative externalities" involved in the Reserve Mining case. Reserve Mining Company is a company in the town of Silver Bay that carries out the iron purification from taconite stones. It was established that taconite stone had enough iron that can be of economic benefit to the people of Silver Bay and the owner of the company. The company brought all the good thing in the town from constructing a town to establishing hospitals and bring ambulances to cater for the need of workers. Moreover, the company gained considerable profit from mining, but had to dump waste material to Lake Superior. The waste caused a lot of displeasure because they polluted the only water reservoir... Pollution...
2 Pages(500 words)Book Report/Review

1 Pages(250 words)Assignment
sponsored ads
Save Your Time for More Important Things
Let us write or edit the research paper on your topic "Responding to GASB request for the Public Comment" with a personal 20% discount.
GRAB THE BEST PAPER

Let us find you another Research Paper on topic Responding to GASB request for the Public Comment for FREE!