Comments (0)
Add to wishlistDelete from wishlist
Cite this document
Summary
Woodrow Wilson’s campaign slogan, however, was almost certainly somewhat a lie – though he was a peace loving man (and won the Nobel peace prize because of it) he also thought the world could be better served by the…
Download full paperFile format: .doc, available for editing
HIDE THIS PAPERGRAB THE BEST PAPER96.1% of users find it useful 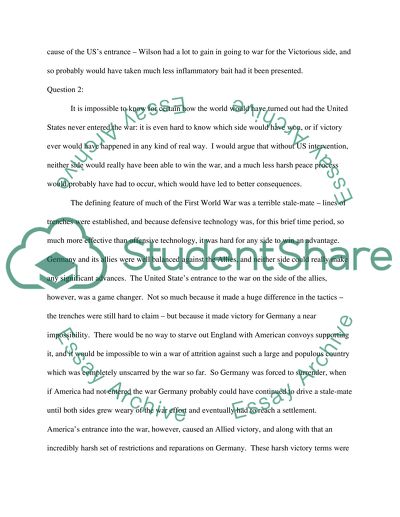 Question One: America declared war on Germany for a number of reasons. Woodrow Wilson’s campaign slogan, however, was almost certainly somewhat a lie – though he was a peace loving man (and won the Nobel peace prize because of it) he also thought the world could be better served by the United States entering the war.
To fully understand why the United States entered the First World War, it is important to understand Woodrow Wilson’s goals. He abhorred war, but was a practical man. He knew, as the war progressed, that Europe was being completely decimated and would have to be wildly re-structured because of the destruction at the war – and the fact that each side blamed the other for starting it. So while in some ways he did not want to enter the war, being a pacifist at heart, Wilson knew that the outcome of the war could have drastic impacts on the way the world worked after it, and these impacts would be decided upon solely by the victors. Knowing all this, Wilson wanted to have a seat at the victor’s table, in order to be a part of determining the new world order. His championing of the League of Nations following the First World War shows what kind of world order he imagined, and he perhaps thought that, through going to war this one time, he could help prevent future conflicts from ever occurring again. He was sadly mistaken, obviously, both because of the harsh reparations demanded by the allies and because o the US government’s unwillingness to take part in the League, but his aspirations were high all the same.
So while the Zimmerman telegram was certainly inflammatory, there are definitely ways in which would could argue that it was used more as a pretext to enter the war than being the sole cause of the US’s entrance – Wilson had a lot to gain in going to war for the Victorious side, and so probably would have taken much less inflammatory bait had it been presented.
Question 2:
It is impossible to know for certain how the world would have turned out had the United States never entered the war: it is even hard to know which side would have won, or if victory ever would have happened in any kind of real way. I would argue that without US intervention, neither side would really have been able to win the war, and a much less harsh peace process would probably have had to occur, which would have led to better consequences.
The defining feature of much of the First World War was a terrible stale-mate – lines of trenches were established, and because defensive technology was, for this brief time period, so much more effective than offensive technology, it was hard for any side to win an advantage. Germany and its allies were well balanced against the Allies, and neither side could really make any significant advances. The United State’s entrance to the war on the side of the allies, however, was a game changer. Not so much because it made a huge difference in the tactics – the trenches were still hard to claim – but because it made victory for Germany a near impossibility. There would be no way to starve out England with American convoys supporting it, and it would be impossible to win a war of attrition against such a large and populous country which was completely unscarred by the war so far. So Germany was forced to surrender, when if America had not entered the war Germany probably could have continued to drive a stale-mate until both sides grew weary of the war effort and eventually had to reach a settlement. America’s entrance into the war, however, caused an Allied victory, and along with that an incredibly harsh set of restrictions and reparations on Germany. These harsh victory terms were a major part of the rise of the Nazis and the Second World War. So if America had never entered, and the war had grinded down naturally, it might have prevented the horrible tragedies of the Third Reich and the Holocaust. Read More
Share:
Tags
Cite this document
(“Germany Essay Example | Topics and Well Written Essays - 500 words - 4”, n.d.)
Retrieved from https://studentshare.org/miscellaneous/1586660-germany

CHECK THESE SAMPLES OF Germany

...? 28 February, Characteristics of Germans and Americans: Germans are very straightforward in their speech. They do not make use of formal words to unnecessarily complicate their speech. All they want is to convey to the listener their point with minimum inconvenience. Americans are also very much like them in this respect. Unlike Germans and Americans, people of Britain make their speech formal so as to regulate the tension words might convey to the listener (Culture Smart! Germany 41). Although, it is a good practice, yet it has its own cons. The listener does not understand the gravity of situation when listening to a speech full of words like “please” and “may”. On the other hand, German expression also has its cons....
1 Pages(250 words)Essay

...to the fact that Germany, if England was overrun, could just as easily begin doing the same to America. As for the Jews uniting to stop buying German goods, they were right to do what they needed to do to get the message across to Hitler. It was not, as Mr. Freedman suggests, because the Jews caused their own problems. Again, is he honestly suggesting that the Jews made their own bed, as the saying goes, for World War II? Hitler’s flying of the swastika prompted an outcry from the Jews, and to get their point across, they stopped buying German goods. It would be the same as if someone walked into a restaurant and sat down for a meal, but received less than standard service and cold food. They would not pay for their...
2 Pages(500 words)Essay

...7th May Hitler’s Table Talk Hitler’s Table talk consists of s of Hitler’s casual conversations during lunchand dinner time. These conversations were made in the presence of close friends and colleagues and present an unhindered access in the mind of Adolf Hitler – one of the worst tyrants that the world has seen. These conversations were made by Hitler during World War 2 years. The main topics which are covered in this book are the following – Hitler’s thought on his enemies – Russians , Americans , English and Jews Plans for the development of Germany and the territories occupied after the war. Discussion on the influence of religion in Germany and other countries. Hitler has shown complete contempt for...
4 Pages(1000 words)Essay

...Due Germany Assignment Frederick the Great of Prussia and Joseph II of Austria are two unique and reputable leaders of history. Each one has contributed greatly to his country and tried to implement positive and beneficial change in the ways that they thought best. Both men were followers of a social and political ideology called “Enlightened Absolutism,” which refers to the belief in a single, absolute monarchy, or despot, where the ruler has complete and total control, but emphasizes rationality, religious tolerance, freedom of speech and of the press. They were, also, incredible supporters of the arts, sciences, and education. These men, despite their desire for positive reform, were met with much opposition...
1 Pages(250 words)Essay

2 Pages(500 words)Essay
sponsored ads
Save Your Time for More Important Things
Let us write or edit the essay on your topic "Germany" with a personal 20% discount.
GRAB THE BEST PAPER

Let us find you another Essay on topic Germany for FREE!