Comments (0)
Add to wishlistDelete from wishlist
Cite this document
Summary
Balzac and the little Chinese Seamstress is partly biographical, partly fictional novel that takes the reader to the remote village in Phoenix Mountain to show the life of simple peasants during the Cultural Revolution in China. Uneducated, simpleminded people became…
Download full paperFile format: .doc, available for editing
HIDE THIS PAPERGRAB THE BEST PAPER91% of users find it useful 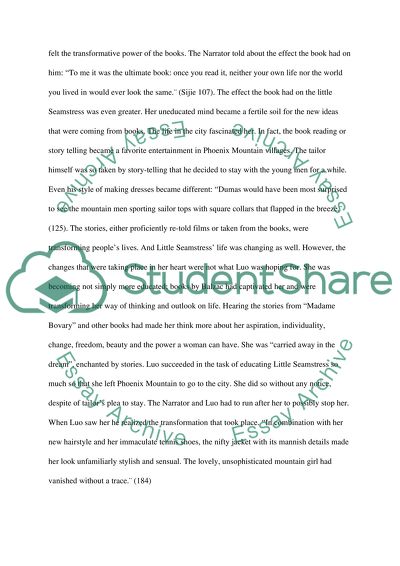 Extract of sample "Balzac and the Little Chinese Seamstress"

Balzac and the little Chinese Seamstress is partly biographical, partly fictional novel that takes the reader to the remote village in Phoenix Mountain to show the life of simple peasants during the Cultural Revolution in China. Uneducated, simpleminded people became “revolutionary peasants” and were honored for it, while educated and intellectuals were looked down upon, disgraced and exiled. To keep the revolution alive, to regain his power and to appeal to simple people the Chairman of the Communist Party in China, Mao Zedong was forcing socialism onto his country and as the result of purges a great number of intellectual people were sent to the so-called reeducation camps thus “ignorance was in fashion”. As in the story by Dai Sijie, two young sons of doctors were sent to a remote village to such a camp. Having a very slim chance of ever being allowed back to the city, the boys had to adjust to the life in the village; they had to endure humiliation and hard labor. The only books they were allowed to read were books approved by communists. Even playing the music could be dangerous if it was not a music approved by Chairman Mao.
Most members of village the Narrator and Luo were sent to were illiterate and had low aspirations. They were uneducated: a clock was a novelty for them and, more so, the violin, which they considered a toy. The only person who ever saw such musical instrument was the tailor. However, he never heard the music it played. The “revolutionary peasants” were very ignorant. When Luo contracted malaria, the choice of cure was weeping and a “shock treatment” in the ice-cold water.
When the narrator and Luo met a very beautiful little seamstress and her father, both of the young man became attracted to her. Luo confessed, though, that she was “too uncivilized” for him to fall in love. When, through the series of events, the Narrator and Luo obtained the “forbidden books”, they also started reading it to the Little Seamstress. Everyone felt the transformative power of the books. The Narrator told about the effect the book had on him: “To me it was the ultimate book: once you read it, neither your own life nor the world you lived in would ever look the same.¨ (Sijie 107). The effect the book had on the little Seamstress was even greater. Her uneducated mind became a fertile soil for the new ideas that were coming from books. The life in the city fascinated her. In fact, the book reading or story telling became a favorite entertainment in Phoenix Mountain villages. The tailor himself was so taken by story-telling that he decided to stay with the young men for a while. Even his style of making dresses became different: “Dumas would have been most surprised to see the mountain men sporting sailor tops with square collars that flapped in the breeze.¨ (125). The stories, either proficiently re-told films or taken from the books, were transforming people’s lives. And Little Seamstress’ life was changing as well. However, the changes that were taking place in her heart were not what Luo was hoping for. She was becoming not simply more educated; books by Balzac had captivated her and were transforming her way of thinking and outlook on life. Hearing the stories from “Madame Bovary” and other books had made her think more about her aspiration, individuality, change, freedom, beauty and the power a woman can have. She was “carried away in the dream”, enchanted by stories. Luo succeeded in the task of educating Little Seamstress so much so that she left Phoenix Mountain to go to the city. She did so without any notice, despite of tailor’s plea to stay. The Narrator and Luo had to run after her to possibly stop her. When Luo saw her he realized the transformation that took place. “In combination with her new hairstyle and her immaculate tennis shoes, the nifty jacket with its mannish details made her look unfamiliarly stylish and sensual. The lovely, unsophisticated mountain girl had vanished without a trace.¨ (184)
This is a great irony of the story. The narrator and Luo are sent to be re-educated, and they bitterly resent it. However, Luo attempts to re-educate a “simple mountain girl” so that she will become more like him. He succeeded, albeit not to his satisfaction. The new ideas that had never entered her mind prior to reading western books expanded her horizons and she embarked on the journey to the unknown. She became independent, and the simple life in the mountains was not enough for her any more.
Just like Luo’s re-education failed to make him what Chairman’s regime wanted him to become, Luo’s attempt to educate a simple girl brought other results that what he had anticipated. People have a free will and the choices they make might not be convenient or satisfactory to their educators or, even, frustrating. That is the reason the Narrator and Luo burned books after the Little Seamstress’ departure.
Works Cited:
Sijie, Dai. "Balzac and the Little Chinese Seamstress". Trans. Ina Rilke. New York: Anchor Books, 2002.Print. Read More
Share:
Tags
Cite this document
(“Balzac and the Little Chinese Seamstress Essay Example | Topics and Well Written Essays - 500 words”, n.d.)
Balzac and the Little Chinese Seamstress Essay Example | Topics and Well Written Essays - 500 words. Retrieved from https://studentshare.org/miscellaneous/1586353-balzac-and-the-little-chinese-seamstress

CHECK THESE SAMPLES OF Balzac and the Little Chinese Seamstress

HUMAN AGENCY AND COMMUNITY IN A GLOBALIZING WORLD

...the said issue are being modified in contrast with the struggling function of the individuals involved. Gender as a social concept, as well as other issues like morality, fidelity and the like, is being analyzed by human agency as represented by the characters in the story. In Dai Sijie’s Balzac and the Little Chinese Seamstress, a representative condition of a man facing the complex clashing of new ideas and the old ones in a setting that can be attributed to globalization is illustrated. The personas in the story are engulfed by a situation where their powers as human individuals are spirited in order to overcome the difficulties in their lives and ultimately, find...
3 Pages(750 words)Essay

...? “Little Clinic” Innovative Nursing Care Model: Little Clinic The Little Clinic is a healthcare services company that administers march in clinics located within trade spots. The clinics spotlight on diagnosing and treating minor illnesses by nurse practitioners under the physicians. The Little Clinic offers precautionary and healthful contributions encompassing health transmissions, bodily and vaccinations by providing prescriptions on the basis of diagnosis and treatment recommended. All these criteria could be easily fulfilled in my work setting, the Children’s Hospital. The mission of the organization is to provide excellent, physical, emotional and pious care to the...
3 Pages(750 words)Dissertation

...urban settlements, most Italians moved from the cost and settled in areas around New York metropolitan. In 1910, population of Americans from Italian ancestry living in the region was approximately 10000. This does not mean that the entire population of Little Italy was ten thousand. Other people, especially Chinese immigrants were living with Italians within the city. As of 2011, demographic statistics shows that Little Italy comprised of approximately 1200 Americans from Italian ancestry. Vincenza (2008) says that through the ages, residents in this region continually move from Little Italy to places like Texas and California in search of greener pastures. This is...
4 Pages(1000 words)Research Paper

In the rudimentarily backward village, the young men meet a beautiful girl, and the rest of their days are considerably influenced by her presence. A look into the nature of the main characters, the Narrator, Luo, and the Little Chinese Seamstress, proves that though the Western literature they read has considerably influenced their thinking and behavior, it is their very basic nature that comes out as their actions. In other words, Western literature only acts as a catalyst in their change. This is evident from the fact that after reading the same literature, three of them show contradicting qualities. In the novel, the Little Seamstress is the daughter of a wealthy tailor from a neighboring village. She is better off compared t...
5 Pages(1250 words)Book Report/Review

...Chinatown, Los Angeles. Introduction The first Chinese people arrived at Los Angeles in 1852 and they continued with their migration to Los Angeles throughout 1870. By this time,1870, Chinatown, LA had more of an identifiable settlement and town. Chinatown consisted of about 200 citizens who lived within a small block that they regarded as their home. At that time, the Chinese lived in a dark broken down alley. This alley was one-block long and 50 feet wide (Cho, 14). Despite all challenges, Chinatown managed to evolve into one of the most famous neighborhoods in Los Angeles. How, Why, and Who Founded Chinatown, LA The first Chinese who arrived in Los Angeles were majorly men. These men...
10 Pages(2500 words)Essay

..., as she engages in a couple of decadent pleasures, in a yet conservative Shanghai. In addition, she indulges secretly in the game of Mahjong while the anti-rightist Movement takes place. In both the stories, the authors highlight the fact of promiscuous behavior of their female protagonists as they have no qualms about exchanging lovers as they wished. “Balzac and the Little Chinese Seamstress” by Dai Sijie is another Chinese story that revolves around the lives of two teenagers who were compelled to leave their hometown of Chengdu to be re-educated in a mountain village. In this story, one of the youths is the narrator who is not named and his parents...
4 Pages(1000 words)Essay

6 Pages(1500 words)Research Paper
sponsored ads
Save Your Time for More Important Things
Let us write or edit the essay on your topic "Balzac and the Little Chinese Seamstress" with a personal 20% discount.
GRAB THE BEST PAPER

Let us find you another Essay on topic Balzac and the Little Chinese Seamstress for FREE!