Comments (0)
Add to wishlistDelete from wishlist
Cite this document
Summary
It is probably more influential and expressive than words. Dancing is form of art and by definition it is an expression of soul. There are many different kinds of dances in the world that belong to various cultures and traditions…
Download full paperFile format: .doc, available for editing
HIDE THIS PAPERGRAB THE BEST PAPER91.2% of users find it useful 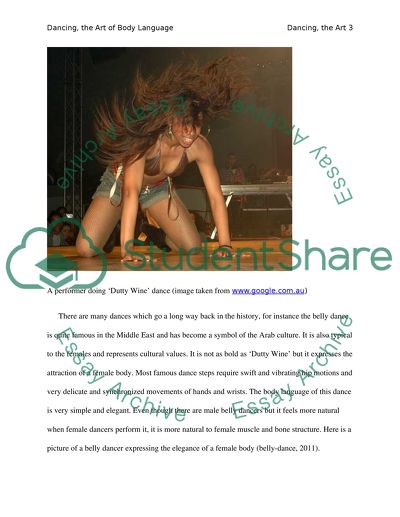 Dancing, the Art of Body Language [Learning Or Number] [Due Dancing is an expression just like language. It is probably more influential and expressive than words. Dancing is form of art and by definition it is an expression of soul. There are many different kinds of dances in the world that belong to various cultures and traditions. They all speak of different human emotions. Some express happiness and some depict romance. For instance, there is a dance originating from Jamaica called ‘Dutty Wine’ in which the performer expresses very intense emotions with movements of the body. It involves rotating the neck like a bird while simultaneously moving wrists and posterior. Sometimes the performers also do the ‘splits’ in it. It is a kind of sensual dance where the performer is usually a female displaying her skills through various dance moves. It is usually performed with a typical reggae-styled beat playing in the back ground. This depicts bolder female attitude and it represents the 21st century. All in all, it is not a typical delicate feminine dance (Evans, 2006). Here in this picture below the female performer is doing a very bold move by swinging her hair. It could probably represent female liberty. In this pose, she is shown sitting on the floor on all fours. History tells us that women have never been this wild in their dances. As it can be seen from the picture, the performer is shaking her hair while on the floor, this represents very bold body language. Such kinds of dance moves aren’t expected of females, that is why it comes as a shock to new watchers and immediately grabs their attention. The dance moves are rough, wild and flamboyant. It shows the opposite side of the female gender, opposite to the delicate and submissive side.

A performer doing ‘Dutty Wine’ dance (image taken from www.google.com.au)
There are many dances which go a long way back in the history, for instance the belly dance is quite famous in the Middle East and has become a symbol of the Arab culture. It is also typical to the females and represents cultural values. It is not as bold as ‘Dutty Wine’ but it expresses the attraction of a female body. Most famous dance steps require swift and vibrating hip motions and very delicate and synchronized movements of hands and wrists. The body language of this dance is very simple and elegant. Even though there are male belly dancers but it feels more natural when female dancers perform it, it is more natural to female muscle and bone structure. Here is a picture of a belly dancer expressing the elegance of a female body (belly-dance, 2011).
Image taken from www.bellydance.org

The picture above shows a belly dancer posing a crane like stance in which she is standing with a sensual posture, head held up high and with a relaxed smile. She is wearing small rattling shells on her breast which make nice clattering sounds when she sways and makes elegant and eye-catching dance moves. Such body language just states the beauty and fascination of a female body.
Asia has a very rich culture and so are its dances. One of the oldest Chinese dances known today is the Yangge dance (pronounced as pinyin). In this dance female performers wear very bright colors to celebrate the sun. The body movement of the performers is very smooth and steady representing winds and plantation. Yangge is also known as the rice sprout song (Wikipedia contributors, 2011). Here in this picture, the girls depict elegant spiritual moves honoring the sun. In their hands, they are holding green colored bandannas depicting leaves or greenery or crops, as it is the harvesting season. By the time the season of to perform this dance arrives, rice crop in China is ready. That is why the girls are expressing joy by holding green color. Other than that, they are wearing orange and red colored dresses glorifying the sun.
Image taken from www.chinese.cn

Traditional dances are not only limited to Asia, Native American Indians have a very rich and diverse dance culture. Most of their dances are associated with natural forces like rain and fire. Other dance forms depict victory or getting ready for war. These dances are both fun and spiritual (Bear,2011). Many of their dances have names on animals just like Eagle dance, rabbit dance. Here in the picture below the performer is doing the Eagle-dance with eagle feathers attached to her clothes.
Image taken from www.publicdomainpictures.net

...﻿Body Language, a Sociological Perspective Communication can be generally defined as the conveyance of meaning from one person to another. However, the thoughts held in one person’s brain, when communicated by means of their speech and bodily actions are not necessarily the mental image or precise idea another person receives as a result of this same language use and actions. This demonstrates that the concept of communication is not bound by the sounds and words that humans have developed as a method of expressing their ideas. Communication is also extended to behaviors and gestures. The contextual meaning of body language must always be taken into...
5 Pages(1250 words)Research Paper

...?LEARNING/TEACHING THEORIES and Number of Introduction Behaviorism is a type of teaching/learning method, which has shown so much success in the fields where there is correct response, which is usually easily memorized. This field of education came into play as a reaction against introspective psychology, which was active between 19th and 20th Century. According to Wilhelm Wundt, introspective psychology was the primary basis of psychology. Wundt and other psychologists argued that introspective psychology relied mostly on the reports of first person and their first hand experiences. However, behaviorists such as B.F Skinner and J. B Watson disagreed with Wundt on the basis that his methodology was not quantifiable and lacked... THEORIES and...
6 Pages(1500 words)Research Paper

...The Importance of Body Language How can an individual tell if another person is actually telling the truth with his or her verbal responses, or is simply lying in order to be kind' How can a person make sure another individual is interested in what he or she has to say' How can an individual tell, without words, if another individual likes him or her' The answers to all of these questions include the science of body language and gestures. Gestures are very important when communicating with others. Initially, gestures are a way for individuals to survive as infants. Since infants cannot speak, they use a variety of gestures in order to communicate. Thus, gestures...
3 Pages(750 words)Article

Mythology and Symbolism in Irish Literature

...routines from which no escape seems possible'. (Andrews 1995, p. 89) Though Friel was known as the master of depicting realism, the bright example of which is his Translations, with the famous scene of love between Yolland and Maire, his 'Dance at Lughansa' is full of the body language, dancing and rituals. This play seems to have been influenced by the recent trends of Irish literature and theatre. In the beginning of 1980s the traditional Irish theatre was met by new non-realistic and non-verbal features. In addition, Friel himself was looking for a new topic of his creative work. In distinction from Yeats, who actively used the historical background and historic...
15 Pages(3750 words)Book Report/Review

..."Its how you looked when you said it, not what you actually said" wrote Pease & Pease. This line explains how human body is communicating when the lips are talking or sealed. Verbal communication is a very recent human development and humans have relied on body language for much more years. Pease & Pease(.com) write that, "The ability to read a person's attitudes and thoughts by their behavior was the original communication system used by humans before spoken language evolved." Pease and Pease (.com) while talking about Mehrabian write that, "The total impact of a message is about 7 percent verbal (words only) and 38 percent vocal (including tone of voice, inflection,...
4 Pages(1000 words)Essay

...Body Language in the Workplace Communication can be roughly defined as the transfer of meaning from oneindividual to another. However, the ideas held in one person’s brain communicated through their actions and speech are not necessarily the ideas the other person receives as a result of these same actions and speech. This illustrates that the idea of communication is not limited to the words and sounds that humans have developed as a means of expressing their ideas but can also extend to gestures and behaviors. Persons of any race, personality, background or gender utilize an assortment of speech and conversational skills in an attempt to communicate appropriately in a specific situation. The idea...
4 Pages(1000 words)Admission/Application Essay

...﻿Analysis of Body LanguageBody language is an important aspect in communication. It generally incorporates all nonverbal communication including body posture, facial expressions, eye contact and natural gestures. It is important to be conscious of body language and what it implies. As such, gestures ought to be expressive. They are aimed at emphasizing what is being said. In addition, when communicating to someone, your body language ought to be in congruence with what you are saying. This implies that you have to give off signals and gesturers that are in tandem with what you are...
2 Pages(500 words)Article

...Body Language Body language is usually incorporated in daily communication among human beings. It can be defined as a nonverbal mode of passing information that involves the movement of some body parts. These movements could either be consciously or unconsciously made including body postures that communicate attitudes and feelings. Gestures, facial expressions, stance are some of the most important forms of body language and majorly support the message being communicated verbally as well. In some cases the message that sign language sends might contradict the one send verbally and...
2 Pages(500 words)Essay

...Listening Report: Body Language Outline: The lecture by Amy Cuddy d “Your body language shapes who you are” digs with acute intelligence into the idea of the influence made by our non-verbal expressions on others. This particular idea continues to fascinate many around the globe, but not many are aware that our body language does play a role in governing us to some extent. In particular, Cuddy explores the non-verbal expressions of power and dominance to establish the reality of a variety of influences exerted by body language of a person. She identifies the power expressions of victory and loss and then...
2 Pages(500 words)Coursework
sponsored ads
Save Your Time for More Important Things
Let us write or edit the essay on your topic "Body language (Dancing)" with a personal 20% discount.
GRAB THE BEST PAPER

Let us find you another Essay on topic Body language (Dancing) for FREE!