How We Live and Die - Assignment Example

Comments (0)
Add to wishlistDelete from wishlist
Cite this document
Summary
Breathing is a production of addition and subtraction, where good air comes in and bad air comes out, so that clean blood can circulate properly within our bodies. Breathing, however, does not take place in two or three steps. It involves varied, interconnected processes that…
Download full paperFile format: .doc, available for editing
HIDE THIS PAPERGRAB THE BEST PAPER98.2% of users find it useful 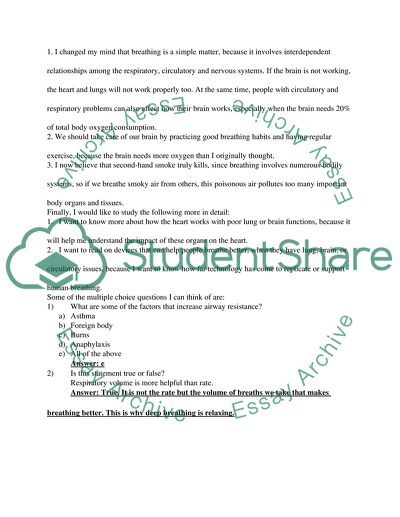 Extract of sample "How We Live and Die"

Today’s Your number Your email PARA1005 Topic section Marc Colbeck Three main things I learned from this session were:
1. Breathing is a production of addition and subtraction, where good air comes in and bad air comes out, so that clean blood can circulate properly within our bodies. Breathing, however, does not take place in two or three steps. It involves varied, interconnected processes that are all critical for good breathing. Any malfunction in any process can lead to inefficient or poor breathing.
2. The air we breathe is not pure oxygen, but composed of nitrogen, oxygen, carbon dioxide and even water and Argon. This means that the body does a great deal of work in breaking down the air we breathe into outputs that we need to live.
3. Breathing to live does not end with simply inhaling air through ventilation, but its final process is cellular respiration. Only when our cells properly “breathe” can we “live.”
Some things I learned in this topic that I may be able to use in future are:
1. Artificial haemoglobin is a critical innovation, because it will solve blood supply problems and help save lives in the future. Its production, however, remains on the works, which means that in the meantime, we have to still rely on blood donations as one of the ways of giving and receiving blood.
2. Knowledge of the role of the circulatory system is crucial in understanding exhalation, because it affects the human heart rate. A good heart can exhale the bad air out and exhaling properly should also be emphasises in breathing exercises.
3. The formula for blood pressure will be important in understanding how to have a healthy heart, because it defines the factors that affect it. Knowing these factors for each person will help them understand possible underlying circulatory problems.
Some things I have changed my mind about, as a result of this topic are:
1. I changed my mind that breathing is a simple matter, because it involves interdependent relationships among the respiratory, circulatory and nervous systems. If the brain is not working, the heart and lungs will not work properly too. At the same time, people with circulatory and respiratory problems can also affect how their brain works, especially when the brain needs 20% of total body oxygen consumption.
2. We should take care of our brain by practicing good breathing habits and having regular exercise, because the brain needs more oxygen than I originally thought.
3. I now believe that second-hand smoke truly kills, since breathing involves numerous bodily systems, so if we breathe smoky air from others, this poisonous air pollutes too many important body organs and tissues.
Finally, I would like to study the following more in detail:
1. I want to know more about how the heart works with poor lung or brain functions, because it will help me understand the impact of these organs on the heart.
2. I want to read on devices that can help people breathe better, when they have lung, brain, or circulatory issues, because I want to know how far technology has come to replicate or support human breathing.
Some of the multiple choice questions I can think of are:
1) What are some of the factors that increase airway resistance?
a) Asthma
b) Foreign body
c) Burns
d) Anaphylaxis
e) All of the above
Answer: e
2) Is this statement true or false?
Respiratory volume is more helpful than rate.
Answer: True. It is not the rate but the volume of breaths we take that makes breathing better. This is why deep breathing is relaxing. Read More
Share:
Tags
Cite this document
(“How We Live and Die Assignment Example | Topics and Well Written Essays - 500 words”, n.d.)
How We Live and Die Assignment Example | Topics and Well Written Essays - 500 words. Retrieved from https://studentshare.org/miscellaneous/1579581-how-we-live-and-die

“How We Live and Die Assignment Example | Topics and Well Written Essays - 500 Words”, n.d. https://studentshare.org/miscellaneous/1579581-how-we-live-and-die.
Comments (0)
Click to create a comment or rate a document

CHECK THESE SAMPLES OF How We Live and Die

How Social Media affects the way we live

...to a higher level. Main focus of the paper The main focus of the paper is the rhetorical analysis of the way in which the social media affects our lives. Rhetoric is the way in which we use languages and images to persuade. The media through several endeavors asks the people in many ways to buy something, influence in their own way through several product differentiating strategies and mould the consumers behaviors. Rhetorical analysis of the social media helps the user of the social media to become perfectly informed. At the same time evaluation of the ethical messages can be analyzed in order to test the effect on the common public and the way they affect the society (Bolin Carroll, 2010, p.46). Social...
12 Pages(3000 words)Assignment

This is How We Live

...?This is How we Live Having been born into this current generation, I do not really give the lifestyle a second thought. I grew up surrounded by the luxury of automation and would most likely be lost if I were left to my own devices in the event that a gadget, app, or technology has not yet been invented to do something for me. I barely use my hands these days except to type away on my laptop or swipe away on my tablet PC. Other than those activities, I think my fingers would begin to suffer from rigor mortis. After reading the chapter “This is How we Live” in Ellen Degeneres' book “The Funny Thing Is”, I found myself contemplating her...
4 Pages(1000 words)Essay

How should we live on the earth

...?The earth is regarded as the only planet where life exists; therefore, as human beings, we should find ways to coexist in harmony with the earth andthe environment. Over the years, philosophers and sociologists have come up with theories, which explain the existence of man. Many of them have alluded to the fact that man has coexisted with the environment and has depended on land to survive. Leopold suggests that the coexistence of man and the environment is ancient. He further suggests that in ancient history, man measured his property value using land as a measure. Hence, land is valuable to man and even biblically “since the days of Ezekiel and Isaiah”. The question of how we should live on earth has been there since the early... and...
4 Pages(1000 words)Essay

Eschatology: What happens when we die

... Eschatology What is the final destination after we die? Do we go to heaven or hell? Are we condemned to hell or are we directed to go to heaven? Do we cease to live or do we sleep for a certain time before our final judgment? Alongside the provocative question of the implication of life, is the question of what happens to a person when they die. These questions are hard to answer and that people ask themselves these questions in their entire life (Bloch and Jonathan 42). The purpose for these questions is because every human being is mortal and they will die someday. Therefore, death is something that humanity share in that we are born, we live, and eventually we die. In order to comprehend what happens when a person dies... through in...
5 Pages(1250 words)Assignment

What happens after we die

...Plato. In the first chapter which is entitled The Philosophical Act, Pieper was very philosophical. The meaning was so deep in the chapter where he talked about the common good and the common need (Pieper 78). He might want to tell something about how philosophy can cause disturbance but it was left to the reader to identify what kind of disturbance did Pieper want to convey to the readers. Probably he tried to connect the philosophy of common good and common needs as people go for the utilitarian world filled with work to satisfy the needs to survive. I can see his point regarding the philosophy that he promotes. Nowadays consumer culture is prevalent and sometimes it goes beyond the necessity. As a result, crimes...
5 Pages(1250 words)Essay

The Right to Live or Die

How the Internet has Changed the way we live

...destination. It eases message delivery system. Helpdesk is no longer a matter of headache for the customers. Internet customer support is always at the service of the customers. One issue of concern is that, it is not possible to directly deal with the customers and that there is no sense in personal identity. We have seen how tremendously Internet has changed the whole concept of the various aspects of Business in our modern lives. PERSONAL IMPACTS SOCIAL NETWORKING From the beginning, Internet aimed at connecting not only computers but people also. Social network has become quite a buzzword. A social network is a network of communities of people with common interests and activities....
9 Pages(2250 words)Essay

How Did Kurt Cobain Die

...Cobain’s hand damaged by the heat of gun? How could he have managed this maneuver with the amount of drugs that were in his system at the time of death? Why would he bother telling his wife he was seeking a divorce if he was planning on killing himself and why would he write a note to his fans regarding his decision to leave the music industry if he weren’t planning on living elsewhere? While the answers to these questions may not necessarily rule out the possibilities of suicide, the questions themselves do seem to suggest a complicit hand in the death of the singer/songwriter. Although he was considered suicidal by police thanks to the reports filed by Courtney Love, Cobain himself never indicated...
5 Pages(1250 words)Essay

The world we live in

...The World We Live In of Intersectionality In the human species, there are different types of individuals spread across the globe. People exist in diverse domains ranging from their ecosystems, character, looks, gender, believes to age. The diversity is so wide that it eventually covers all aspects of humanity. Everyone belongs to one group or another, and nobody is left out of the intersectionality web. Actually, intersectionality applies to everyone and not just some minority group or groups. Every individual represents one identity or another. Intersectionality is always not just how we see ourselves, but more of how the world itself sees us. The world...
2 Pages(500 words)Assignment

The house we live in

...Reaction paper – The House we live in After watching the documentary, I think the brings forward one of the best ways through which a specific portion of the community takes advantage of another. Although racism is not biological, whites take advantage of it so as to discriminate others and to secure favors for themselves. This is why the author states that benefits accumulate on the side of the white people. However, this is not because they are hard workers but because they are simply white. From a personal perspective, this is one of the most unfair ways of treating people. This is because people should benefit from what they earn. Nevertheless, this is not the case as non-whites get fewer benefits...
2 Pages(500 words)Term Paper
sponsored ads
Save Your Time for More Important Things
Let us write or edit the assignment on your topic "How We Live and Die" with a personal 20% discount.
GRAB THE BEST PAPER

Let us find you another Assignment on topic How We Live and Die for FREE!