Comments (0)
Add to wishlistDelete from wishlist
Cite this document
Summary
Anheuser-Busch, the largest brewer in North America, was the first company to purchase the brand in 2006 from original owners InBev, the company formed after the merger of Belgian-based…
Download full paperFile format: .doc, available for editing
HIDE THIS PAPERGRAB THE BEST PAPER93.7% of users find it useful 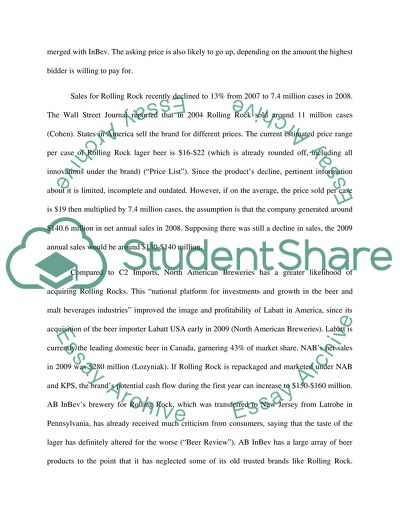 In the history of its brewing operations, Rolling Rock had only two acquirers thus far. Anheuser-Busch, the largest brewer in North America, was the first company to purchase the brand in 2006 from original owners InBev, the company formed after the merger of Belgian-based brewing corporation Interbrew and South-America’s largest brewing company AmBev. The deal was closed at $82 million (Boselovic). Two years later, in July 2008, InBev bought Anheuser-Busch for $52 billion and reacquired ownership of Rolling Rock. The merged company was also renamed Anheuser-Busch InBev (Anheuser-Busch InBev). However, although the company’s net profit sales have increased, the volume of beer has lowered and the Rolling Rock brand is among the least performing in the beer market. This weak performance triggered AB InBev to consider the sale of Rolling Rock. Reports only give hints that the most likely acquirer would be North American Breweries Inc. (NAB), owned by KPS Capital Partners, a private equity firm headquartered in New York. In March 2009, Labatt USA, the private U.S. importer of Labatt beer, was bought by KPS from AB InBev (Brooks). Besides KPS, another potential acquirer is C2 Imports, a California beer importer of specialty beers around the world. The company had earlier entertained bids to purchase Rolling Rock with the help of Lazard investment bank, but was displeased with the offers. Rolling Rock among many assets AB InBev needs to “divest in order to repay debt” incurred from the $52 billion merger (“Anheuser mulls”).
Estimated asking price for Rolling Rock, although not specifically stated by AB InBev, may probably be along the lines of $70-$75 million. This is due to the fact that the value of the product has gone down over the years since its sale to Anheuser-Busch, then later when company merged with InBev. The asking price is also likely to go up, depending on the amount the highest bidder is willing to pay for.
Sales for Rolling Rock recently declined to 13% from 2007 to 7.4 million cases in 2008. The Wall Street Journal reported that in 2004 Rolling Rock sold around 11 million cases (Cohen). States in America sell the brand for different prices. The current estimated price range per case of Rolling Rock lager beer is $16-$22 (which is already rounded off, including all innovations under the brand) (“Price List”). Since the product’s decline, pertinent information about it is limited, incomplete and outdated. However, if on the average, the price sold per case is $19 then multiplied by 7.4 million cases, the assumption is that the company generated around $140.6 million in net annual sales in 2008. Supposing there was still a decline in sales, the 2009 annual sales would be around $130-$140 million.
Compared to C2 Imports, North American Breweries has a greater likelihood of acquiring Rolling Rocks. This “national platform for investments and growth in the beer and malt beverages industries” improved the image and profitability of Labatt in America, since its acquisition of the beer importer Labatt USA early in 2009 (North American Breweries). Labatt is currently the leading domestic beer in Canada, garnering 43% of market share. NAB’s net sales in 2009 was $280 million (Lozyniak). If Rolling Rock is repackaged and marketed under NAB and KPS, the brand’s potential cash flow during the first year can increase to $150-$160 million. AB InBev’s brewery for Rolling Rock, which was transferred to New Jersey from Latrobe in Pennsylvania, has already received much criticism from consumers, saying that the taste of the lager has definitely altered for the worse (“Beer Review”). AB InBev has a large array of beer products to the point that it has neglected some of its old trusted brands like Rolling Rock. Furthermore, should NAB take over brewing operations, consumers will be intrigued by its newly enhanced taste and given the few but top beers under its name, the company can surely focus on developing the image and profitability of the Rolling Rock brand.
Works Cited
Anheuser-Busch InBev. Anheuser-Busch InBev, 2010. Web. 18 June 2010. .
“Anheuser mulls Rolling Rock Sale – Report.” CNNMoney.com. Cable News Network, 12 Apr. 2009. Web. 18 June 2010. .
“Beer Review – Rolling Rock.” The Brew Club. The Brew Club, 22 May 2009. Web. 18 June 2010. .
Boselovic, Len. “Anheuser-Busch Buys Rolling Rock Brands: Fate of Latrobe Brewings Plant, Workers in Doubt.’ Post-Gazette.com. Pittsburgh Post-Gazette, 20 May 2006. Web. 18 June 2010. .
Brooks, Jay. “InBev To Sell Rolling Rock … Again.” Brookston Beer Bulletin. Brookston Beer Bulletin, 13 Apr. 2009. Web. 18 June 2010. .
Cohen, Jim. “Anheuser-Busch InBev - Implications of Asset Sale.” Beer Universe. Beer Universe, 13 Apr. 2009. Web. 18 June 2010. .
Lozyniak, Richard. “Labatt USA’s Parent Aims to Really Pour It On.” Buffalo News Business Today. Buffalo News Business Today, 4 Apr. 2010. Web. 18 June 2010. .
North American Breweries. North American Breweries, 2010. Web. 21 June 2010. .
“Price List: Beer-American.” Cape Cod Package Store. Cape Cod Package, 20 June 2010. Web. 18 June 2010. . Read More
Share:
Tags
Cite this document
(“Anhuser-busch buys rolling rock brands Research Paper”, n.d.)
Anhuser-busch buys rolling rock brands Research Paper. Retrieved from https://studentshare.org/miscellaneous/1567925-anhuser-busch-buys-rolling-rock-brands

...?Anheur Busch SWOT Analysis About the company: Anheuser Busch Companies is the leading beer brewer. It produces the world’s largest selling beer brand i.e. the Budweiser and Bud Light. Anheuser Busch falls under the management of its corporate parent Anheur Busch InBev.Anheuser-Busch l started as a small brewery in 1860 in St Loius by Eberhard Anheuser. The company was a pioneer in introducing pasteurization to keep the beer fresh and also was the first to use refrigerated cars for transport of beer. The company's early innovations also included a network of railside ice houses to preserve the beer. It was in 1981, that this small firm...
5 Pages(1250 words)Essay

...profile of the beer (Lang & Rubovits, 1992). The fermentor is used in the primary fermentation, where wort is fermented for between 6 days to 2 weeks. On the other hand, the larger tank is used when the wort is to be fermented for longer, usually for several weeks, to accomplish the reduction of the fermentable extracts, and thus form the crisp profile beer (Plavchan, 1976). After the final stage of the production of the beer, then follows packaging, branding and the transportation of the beer to the designated regions where the customers are to be served. Anheuser-Busch has adopted a technologically aided packaging and branding of its products, with a special emphasis on the tastes and...
4 Pages(1000 words)Essay

...Celtic Rock While possibly a sub-genre of rock, and of straight forward Celtic music, the now bubbling genre of Celtic music cannot be ignored any longer. Often called Celtic punk, or even Irish or Irish punk, it is a sound among itself. The first band to mix these the music and sound of rock with the traditional instrumentation of Ireland and Celtic origin was the Pogues. Playing through the 1980s and the 1990s, the Pogues mixed the edge of rock and roll and the developing punk scene with tin whistles, accordions, and other traditional instrument. Unfortunately, the Pogues broke up in 1996. After many different line up changes, the Pogues started...
3 Pages(750 words)Essay

Rolling Over the Native Culture

...brands on the national and international markets. II. External Environment (Opportunities and Threats) A. General Environment: Chinese beer market is the greatest in the world since late 1990s with the solid sales growth of more than 40 percent in the recent five years. With the largest sales volume globally, the average sales price is still relatively low, confirming the growth potential for domestic and foreign brewers. In addition, there is significant growth in the target population for beer and rise in the average income. Chinese consumers do not have loyalty to the particular brands, while they favor the domestic brews (99.5 percent of all consumed beer). The acquisition of Harbin by...
5 Pages(1250 words)Case Study

Is Anheuser-Busch a monopoly

...that Anheuser-Busch dominates the market because of its low prices because other breweries do the exact same thing. Anheuser-Busch was, until recently, the world’s largest brewery, by volume, but it has since fallen back a little bit because of its reluctant to acquire other breweries. Despite this, Anheuser-Busch has managed to take a 49% market shape in the United States based almost purely on its major brands: Budweiser, Michelob, and Busch. Each of these beers is basically the same recipe, with minor variations and different names, which is what most beer companies do with their beers. Despite all of this, there have been problems growing for the...
10 Pages(2500 words)Essay

...The Rolling Stones Rolling Stones have been in existence for over forty years. The original founder of Rolling Stones was Brian Jones. This took place in England in 1962. Brian was a talented musician who could play various instruments. He became famous when playing Blues in London club. He sought musicians to join his new band he was about to form through advertisement. Ian Stewart a pianist was the first person to join this band. Others members joined later. The band was named after a Muddy Waters song known as “Rollin’ Stone Blues.” Their first performance was on 14 July 1963. This took place at the Flamingo Jazz Club in Soho, London (DeRogatis and Kot 16-20). This paper seeks to...
2 Pages(500 words)Essay

...Brands Brands My favorite brand that deals with computer hardware is Apple Corporation. Apple is an American company which deals with computer electronics and software. According to several sources, the company is known as the best company in the production of computer products (Lashinsky, 2012). Apple is also considered as the largest company that has grown in terms of technological advancement. Currently, the company operates in over 100 countries globally. This paper will talk about Apple as one of the leading brands in the business world. Most of the products manufactured by Apple are suited for business use. However, the products manufactured by the company are extremely costly. In most developed countries, the unique nature... of the...
1 Pages(250 words)Assignment

...Eucrite Meteorite Rock affiliation Eucrite Meteorite Rock A rock is a solid mineral material that forms most of the surfaceof the earth and almost every other planet in the universe. It underlies the soil and oceans. This paper will be looking at the eucrite meteorite rock and outline some of its striking properties. The name Eucrites comes from the Greek work eukritos, which is supposed to mean ‘easily distinguished’. The reason why they are said to be easily recognizable is that they have silicate minerals in them. The minerals are characterized by relatively large grain size (Patchett & Tatsumoto, 1980). The term ‘Eucrite’ has now become obsolete for the igneous rock known as bytownite-gabbro that is formed in the Earth’s crust... . It is...
1 Pages(250 words)Essay

...Thread rolling YourFirst YourLast Thread rolling This is the most preferred or best way of preparing of a smooth,precise and strong external threads. This method is much different from any other methods of threading that is cutting and chasing. This method can be performed on a ductile metal. In the process of its forming, many other forms are achieved, for instance, knurls. To arrive at top notch quality threads, the process must be performed in a precision center less ground. Thread rolling can be performed on a wide variety of parts. Rolled threads are produced on wide various parts by the thread rolling. most times, requirements of the...
2 Pages(500 words)Research Paper
sponsored ads
Save Your Time for More Important Things
Let us write or edit the research paper on your topic "Anhuser-busch buys rolling rock brands" with a personal 20% discount.
GRAB THE BEST PAPER

Let us find you another Research Paper on topic Anhuser-busch buys rolling rock brands for FREE!