Comments (0)
Add to wishlistDelete from wishlist
Cite this document
Summary
The purpose of this essay is to reflect on issues relating to American investment into Mexico and the risk associated with fluctuations of the Mexican Peso (M$) related to the American Dollar (US$). From this perspective this paper will provide a critical perspective from two…
Download full paperFile format: .doc, available for editing
HIDE THIS PAPERGRAB THE BEST PAPER94% of users find it useful 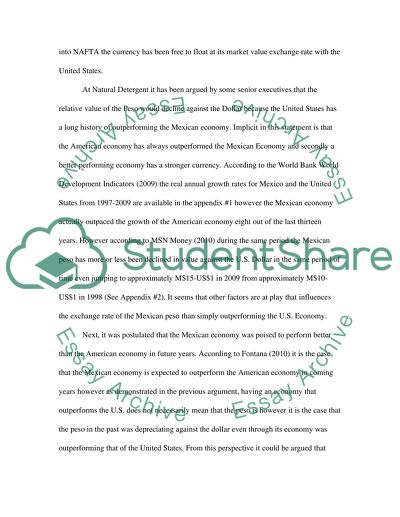 Economy/Business The purpose of this essay is to reflect on issues relating to American investment into Mexico and the risk associated with fluctuations of the Mexican Peso (M$) related to the American Dollar (US$). From this perspective this paper will provide a critical perspective from two points of view.
The format that this paper will utilize is to first provide some insight as to some historical trends of the peso/dollar exchange rate and the American/Mexican economic growth rates. After this point this paper will discuss the potential of the American dollar being strong relative to the Mexican economy as the US has a long history of outperforming the Mexican economy. Secondly this paper will discuss the possibility of the Mexican Peso being strong as a result of anticipated better performance of the Mexican economy relative to the American economy in the future.
There is little question that under present economic circumstances the dollar an peso exchange rate is in a constant state of flux owing to the fact that these two currencies are allowed to float freely against one another and may experience changes resulting from market conditions. However it should be noted that at one point in these nations’ histories the Peso was pegged to the Dollar. Under this fixed exchange rate regime there was effectively no risk associated with any appreciation or depreciation as the M$ was set at a fixed rate to the US$. However it was the case that there was significant inflation in Mexico in the early 90’s so a crawling peg system emerged which meant that the peso needed to be devaluated and as such the M$-US$ exchange rate would occasionally be altered by the central bank. However since Mexico’s introduction into NAFTA the currency has been free to float at its market value exchange rate with the United States.
At Natural Detergent it has been argued by some senior executives that the relative value of the Peso would decline against the Dollar because the United States has a long history of outperforming the Mexican economy. Implicit in this statement is that the American economy has always outperformed the Mexican Economy and secondly a better performing economy has a stronger currency. According to the World Bank World Development Indicators (2009) the real annual growth rates for Mexico and the United States from 1997-2009 are available in the appendix #1 however the Mexican economy actually outpaced the growth of the American economy eight out of the last thirteen years. However according to MSN Money (2010) during the same period the Mexican peso has more or less been declined in value against the U.S. Dollar in the same period of time even jumping to approximately M$15-US$1 in 2009 from approximately M$10-US$1 in 1998 (See Appendix #2). It seems that other factors are at play that influences the exchange rate of the Mexican peso than simply outperforming the U.S. Economy.
Next, it was postulated that the Mexican economy was poised to perform better than the American economy in future years. According to Fontana (2010) it is the case that the Mexican economy is expected to outperform the American economy in coming years however as demonstrated in the previous argument, having an economy that outperforms the U.S. does not necessarily mean that the peso is however it is the case that the peso in the past was depreciating against the dollar even through its economy was outperforming that of the United States. From this perspective it could be argued that some other factor will likely influence the performance of the peso other than outpacing growth over the United States.
Appendices
#1
1997
1998
1999
2000
2001
2002
2003
2004
2005
2006
2007
2008
2009
U.S.
4.22
4.10
5.53
5.26
1.92
3.28
1.71
3.09
2.74
2.77
2.71
0.40
-2.5
Mexico
6.77
4.91
3.86
6.60
-0.16
0.83
1.35
4.19
2.80
4.77
3.29
1.4
-6.3
Difference
-2.55
-0.81
1.67
-1.34
2.08
2.45
0.36
-1.10
-0.07
-2.00
-0.58
-1.00
3.80
#2
References
Fontana, C. (2010) Sell Brazil Bonds, Buy Mexicao, Bank of America Says (Update 4) Business Week. [online] Available at http://www.businessweek.com/news/2010-03-09/sell-brazil-bonds-before-elections-bank-of-america-recommends.html Accessed on March 22nd 2010.
Meigs, J.(1998) Lessons for Asia from Mexico. The Cato Journal. Vol.17 No.2. [online] Available at http://www.cato.org/pubs/journal/cj17n3-6.html Accessed on March 22nd 2010.
MSN Money (2010) US Dollar to Mexican Peso Rates. [online] Available at http://moneycentral.msn.com/investor/charts/chartdl.aspx?Symbol=%2fMXNUSD&ShowChtBt=Refresh+Chart&DateRangeForm=1&C9=2&ComparisonsForm=1&CE=0&DisplayForm=1&D4=1&D5=0&D3=0&ViewType=0&CP=0&PT=11 Accessed on March 22nd 2010.
World Bank World Development Indicators (2009) Real Historic Gross Domestic Product (GDP) and Growth rates of GDP for Baseline Countries/Regions (in Billions of 2005 dollars) 1969-2009). Economic Research service. [online] Available at http://www.cato.org/pubs/journal/cj17n3-6.html Accessed on March 22nd 2010. Read More
Share:
Tags
Cite this document
(“Economy-Business Essay Example | Topics and Well Written Essays - 500 words”, n.d.)
Economy-Business Essay Example | Topics and Well Written Essays - 500 words. Retrieved from https://studentshare.org/miscellaneous/1564459-economy-business

CHECK THESE SAMPLES OF Economy-Business

This research proposal will deal with two themes; the first one is the changing relationship between industrial relations and...

6 Pages(1500 words)Case Study
sponsored ads
Save Your Time for More Important Things
Let us write or edit the essay on your topic "Economy-Business" with a personal 20% discount.
GRAB THE BEST PAPER

Let us find you another Essay on topic Economy-Business for FREE!