Comments (0)
Add to wishlistDelete from wishlist
Cite this document
Summary
Israel’s sovereignty over Jerusalem is a trivial matter for debate because everyone knows that this Holy City has been the capital of Jews and the place of Jewish worship since the early history of Judaism. Although ethnic, cultural, and religious claims from Christians and…
Download full paperFile format: .doc, available for editing
HIDE THIS PAPERGRAB THE BEST PAPER94.6% of users find it useful 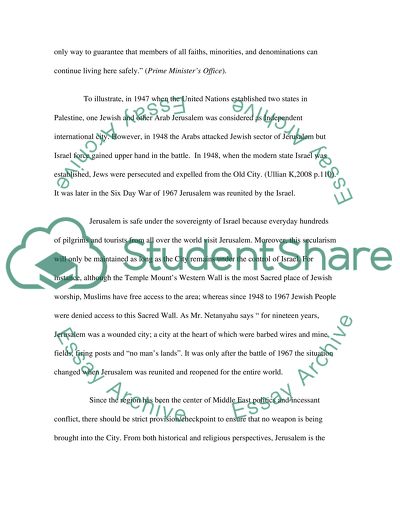 Jerusalem Israel’s sovereignty over Jerusalem is a trivial matter for debate because everyone knows that this Holy has been the capital of Jews and the place of Jewish worship since the early history of Judaism. Although ethnic, cultural, and religious claims from Christians and Muslims have also been persisting over this land for several decades, one would admit that the factual ownership goes to the Jews. However, we propose that Palestinians must be allowed to move freely through the Holy City, provided that they go through a checkpoint to make sure that no weapons are being brought into the City.
Obviously entry to Jerusalem is the privilege of Palestinians and Christians alike because their religious beliefs are also highly associated with this Holy Land. Christianity emerged from Judaism around 4 B.C. since the birth of Jesus Christ who was born and brought up as a true Jew. In the same way, Muslims believe that Mohammad ascended into heaven at al-Haran-al-Sharif which also is one of the areas of current dispute.
Irrespective of the discrepancy, Israel permits all religious beliefs to be cherished in Jerusalem. The Prime Minister Benchamin Netanyahu (2009) expressed the Israel policy on this issue in his address on the occasion of Jerusalem Day State Ceremony. “United Jerusalem is the capital of Israel. Jerusalem has always been-and always will be-ours. It will never again be divided or cut in half. Jerusalem will remain only under Israel’s sovereignty. In the united Jerusalem, the freedom of worship and freedom of access for all three religions to the holy sites will be guaranteed, and it is the only way to guarantee that members of all faiths, minorities, and denominations can continue living here safely.” (Prime Minister’s Office).
To illustrate, in 1947 when the United Nations established two states in Palestine, one Jewish and other Arab Jerusalem was considered as Independent international city. However, in 1948 the Arabs attacked Jewish sector of Jerusalem but Israel force gained upper hand in the battle. In 1948, when the modern state Israel was established, Jews were persecuted and expelled from the Old City. (Ullian K,2008 p.110). It was later in the Six Day War of 1967 Jerusalem was reunited by the Israel.
Jerusalem is safe under the sovereignty of Israel because everyday hundreds of pilgrims and tourists from all over the world visit Jerusalem. Moreover, this secularism will only be maintained as long as the City remains under the control of Israel. For instance, although the Temple Mount’s Western Wall is the most Sacred place of Jewish worship, Muslims have free access to the area; whereas since 1948 to 1967 Jewish People were denied access to this Sacred Wall. As Mr. Netanyahu says “ for nineteen years, Jerusalem was a wounded city; a city at the heart of which were barbed wires and mine fields, firing posts and “no man’s lands”. It was only after the battle of 1967 the situation changed when Jerusalem was reunited and reopened for the entire world.
Since the region has been the center of Middle East politics and incessant conflict, there should be strict provision/checkpoint to ensure that no weapon is being brought into the City. From both historical and religious perspectives, Jerusalem is the undivided eternal capital of Israel and “a house of Worship for all peoples”. (Isaiah 56:7). Therefore, settlements that divide the City again would not be justifiable.
Works Cited
“Address by PM Netanyahu On the Occasion of Jerusalem Day State Ceremony,
Ammunition Hill, Jerusalem”. 21 May, 2009. Prime Minister’s Office.
18 Nov., 2009 http://www.pmo.gov.il/PMOEng/Communication/PMSpeaks/speechjeru210509.htm
The Old Testament.
Ullian K. Frommer’s Israel. Edn. 5, Frommers. 2008. Read More
Share:
Tags
Cite this document
(“Jerusalem Essay Example | Topics and Well Written Essays - 500 words - 1”, n.d.)
Jerusalem Essay Example | Topics and Well Written Essays - 500 words - 1. Retrieved from https://studentshare.org/miscellaneous/1560068-jerusalem

CHECK THESE SAMPLES OF Jerusalem

...Turning Point Jerusalem – First Video Review (a) In specific, does the video give the viewer abrief and accurate historical feedback on the significance of Jerusalem to Jews, Christians, and Muslims? In other words, does the video report a balanced view for all three Abrahamic faith or not? ABC Anchorman Peter Jennings in his presentation of the 4000-year history of Jerusalem appears to have provided a brief yet comprehensive and accurate assessment of Jerusalem in the intent of drawing the general audience into an understanding of its setting on three different religious perspectives. By being in several distinct spots in the holy city, Jennings managed to present...
3 Pages(750 words)Essay

...Manju George George Thomas Political Science -V01 12 March 2009 Holy Jerusalem - The Heart of 3 World Major Religions What The Holy Land Jerusalem Meant To Jews, Christians And Muslims The Jerusalem, named as the 'City of Peace' has a history that goes back to the 4th millennium BCE, making it one of the ancient cities in the world. Jerusalem, the holy place for Judaism, Christianity & Islam is the capital of Israel. A Brief on the Jerusalem History Documentation Video The old walled city, a traditionally world heritage holy place Jerusalem, has a diverse collection of architecture and people like the Armenians, Christians, Jewish, and...
3 Pages(750 words)Movie Review

...Introduction In Karen Armstrong’s 1996 book Jarusalem: One Three Faiths, three of the world’s foremost religions: Judaism, Christianity and Islam. The backdrop of Armstrong’s study is the city of Jerusalem, a city that is considered significantly in all three religions and has been the object of many of the conflicts and issues between them. Armstrong, a former Catholic nun and of considerable repute regarding the religion and the Levant region endeavors to provide a platform for insights and discussions. Among the topics of interest that Armstrong refers to include the perceptions and modes of sacred space, views on the nature of God and religion and the development of myths considered important in Judaism, Christianity...
4 Pages(1000 words)Essay

...Jerusalem Since time immemorial Israel and Palestine have been under consecutive wars which greatly affect the economy of the two countries and welfare of their citizens. However, due to Israel’s stability it has predominantly managed to win the wars and subject Palestine under its governance. Israel and Palestine drafted an agreement in the 1990s putting Israel in control of all the Palestinian amenities such as water. The agreement was geared towards achieving peace between the two countries (Rothblatt, Martine 212). However, today Israel denies Palestine access to these amenities such as clean and safe water. Israel has been reported to introduce a crisis in the sewerage system and water management (Library Information...
2 Pages(500 words)Research Paper

...Introduction Jerusalem, located in the Judean Mountains in between the Mediterranean Sea and the northern tip of the Dead Sea, is one of the oldest cities in the world, with a history that goes back to the fourth millennium BC (Bard, 2009). Significantly, Jerusalem is considered the holiest city in Judaism which made it the spiritual center of the Jewish people, is home to a number of significant ancient Christian sites, as well as considered the third holiest city in Islam (Elon, 1996). Consequently, the old walled city of Jerusalem has been divided into four quarters since the 19th century: the Armenian, Christian, Jewish and Muslim Quarters. Being at the center of the Israel –...
2 Pages(500 words)Essay

...Jerusalem A. In the narration of the 4000-year history of Jerusalem, the video actually gives its teeming audience a very accurate historical feedback on the significance of Jerusalem to the Christians, Muslims and the Jews. The video explains the significance of Jerusalem to Christianity as it traces the exploits of Jesus Christ (central figure in Christianity) in this great city, thus justifying the claim of Christians to the city. Jennings also retraces the history of the Western Wall and its relevance to the people of the Judaic faith. According to Jennings, the Jews believe that the Western Wall is the holiest site on Earth and they hold the city of...
7 Pages(1750 words)Movie Review

...Introduction The changes that have occurred throughout history can be traced back for thousands of years. When looking at the historical components of Jerusalem, one can define over 4000 years of history that has altered the area. The most specific components of this come from religious conflicts in the area as well as settlements which have occurred among Jews, Christians and Muslims. The Peter Jennings report, Jerusalem Stories, identifies the rich history of Jerusalem as well as how it formed for thousands of years between the different religions which claimed the area to be a holy land. Understanding the significance of the history of Jerusalem also creates a...
7 Pages(1750 words)Movie Review

...Population and Jerusalem As with many large cities throughout the world, Jerusalem has experienced rapid and prolonged growth in the past 100 years.However, unique factors that separate Jerusalem from other cities, such as housing shortages, economic issues, as well as the seemingly incessant religious/cultural clash of civilizations that takes place within the city, must be examined as a function of understanding the dynamic within this particular place. As a function of this, the following paper will briefly discuss the issue of housing within Jerusalem; paying special attention to the economic challenges and cultural-religious causations for the rapid population...
2 Pages(500 words)Essay

... Nineteenth Century Jerusalem During the 19th century in Jerusalem, the Jewish, Christian, and Muslim communities all lived in the old city of Jerusalem. However, all three had their own religious focal centers, while they were also divided according to different concepts of religion for the Christians and social frameworks and places of origin for the Jews. The pattern and nature of the built-up area in the old city of Jerusalem was significantly influenced by the heterogeneity of its population, in addition to the attractive power of its holy sites (radiobergen.org 1). In the late 19th century, the city development was dominated by an element of continuity, which was mainly informed by Jerusalem’s unique position as a Holy City... for the...
6 Pages(1500 words)Research Paper

...Tinghir Jerusalem Driven by curiosity for his identity, Kamal Hachkar, the film maker, goes to Tinghir to search for hisroots. In the process, he learns that there were some Jews living there before but had migrated due to hostilities from the Zionists. Kamal however is a Berber Muslim and they too had migrated alongside the Jews to Israel. Kamal grew up in France but had been visiting Tinghir frequently together with his family. Therefore, his first journey is to Israel in search of some remnants of the Jews who had migrated from Tinghir. Kamal’s curiosity as he asks his grandfather questions about the past such as when he asks about the synagogues’ position. The synagogue is no more but the Kamal’s grandfather seems to...
2 Pages(500 words)Essay
sponsored ads
Save Your Time for More Important Things
Let us write or edit the essay on your topic "Jerusalem" with a personal 20% discount.
GRAB THE BEST PAPER

Let us find you another Essay on topic Jerusalem for FREE!