Comments (0)
Add to wishlistDelete from wishlist
Cite this document
Summary
Although they are worlds apart in terms of stature, Hamlet has shown his feelings for her. He calls her “To the celestial, and my soul’s idol, the most beautified Ophelia”and “The fair Ophelia! –Nymph, in the orisons.” He writes to her, gives…
Download full paperFile format: .doc, available for editing
HIDE THIS PAPERGRAB THE BEST PAPER96% of users find it useful 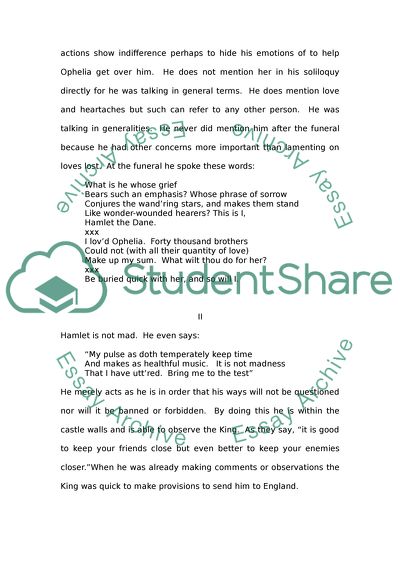 CHECK THESE SAMPLES OF Read Hamlet

...?Running Head: Hamlet Hamlet Inserts His/her Introduction Hamlet is one of the most famous plays of Shakespeare and it is considered a master piece in English literature. Hamlet is a classic tragedy by Shakespeare in which the hero meets his tragic end. It is a story about a prince who takes revenge from his uncle for the death of his father. It is a story of jealousy, treachery and blind revenge. The story is thrilling and it grips the reader through the end. In this paper we will do an analysis of the play and an attempt will be made to interpret Hamlet. Interpretation of Hamlet Many attempts have been made to interpret...
3 Pages(750 words)Essay

...?Introduction In Hamlet, a Danish prince is mourning the death of his father, also d Hamlet. His mother has married Claudius, and she married this man less than one month after Hamlet Sr.’s death. Moreover, young Hamlet was informed by the ghost of his father that Claudius killed him. This is enough to make anybody in this situation feel the same way that Hamlet does – depressed, angry, and ineffectual. The sililoquies in the play show that this is how Hamlet is feeling. What the sililoquies do not show, however, is that Hamlet is mad. For instance, in some sililoquies, Hamlet is shown plotting devious...
6 Pages(1500 words)Essay

.... That would be, determining which scene is the real act and which is the play in the play. Concentration is needed from the reader in order for him to follow the trail of the story and not get lost. This would also be a style used to let the reader think as he continues with the story. Having read the summary of the play in the play, a reader can basically know how the act would go however, conversations of the ‘real’ players hold the reader’s attention to the text. It presents a seemingly mathematical problem to be solved by the reader as one devotes more attention to how the story goes. In proving the guilt of the king, Shakespeare’s use of the play within the play as a speaker to the former’s conscience elicited the...
5 Pages(1250 words)Research Paper

...? (Assignment) Hamlet I Hamlet faces the usual Shakespearean death at the end of the play. As usual in Shakespearean plays, he presents Hamlet with a complex nature that can be analyzed according to the readers’ will. While some claim that Hamlet is the victim of a chain of misfortunes that prevented him from fulfilling his mission, some others argue that he is a coward and a great procrastinator. However, one has to agree that it is his lukewarm approach and his inability to kill Claudius that resulted in the death of many others, resulting in a tragic end not only of his but many others. However, a close look reveals that it is his nature to plan and execute complex...
3 Pages(750 words)Essay

...? Hamlet Table of Contents I. Introduction 3 II. Discussion 4 III. Conclusion 7 Detailed Outline 8 Works Cited 9 I. Introduction The play, written between 1600 and 1601 by William Shakespeare, regarded as the writer with the most influence in all of English literature. The first printed version of the play came out in 1603, with another edition featuring an enlargement of the text coming out a year after. The first public performance of the play was held before the arrival of the first print version, in 1602. The story itself is said to have borrowed from a number of previously existing works. These include the 'Histoires Tragiques' by Francois de Belleforest and the ‘Saxo Grammaticus' History of Denmark, written in Latin...
3 Pages(750 words)Essay

...that the respective authors sought to utilize was differentiated as a direct result of many different factors. The postmodern approach that Stoppard takes as compared to Shakespeare, rather than being a fundamental flaw, is something that helps to make the comparison and contrast between these two works of literature more stark and unique. Works Cited Hooti, Noorbakhsh, and Samaneh Shooshtarian. "A Postmodernist Reading Of Tom Stoppard's "Rosencrantz And Guildenstern Are Dead." Studies In Literature & Language 2.1 (2011): 147-162. Communication & Mass Media Complete. Web. 12 Dec. 2013. Javed, Tabassum. "Perfect Idealism In Shakespeare's Prince Hamlet." Dialogue (1819-6462) 8.3 (2013): 327-333. Academic...
5 Pages(1250 words)Essay

...The question whether the element of tragedy in Hamlet is caused by its protagonist’s incapability to act is a much debated one. Ever since I read theplay, I had been burdened with doubts regarding the reasons for Prince Hamlet’s procrastinations. I was tempted to analyze the text closely on my own terms, though the earlier established critical views were of much help to me in this endeavor. I realized that it cannot be concluded by any means that the Prince was a coward and that he was trying to run away from his responsibilities. Rather, the entire structure of the play revealed that he was in constant search of evidence that confirmed his doubts. It seemed to me that he was different...
2 Pages(500 words)Essay

...Thesis ment Ophelia did not take her own life Essay The Tragedy of Hamlet is deliberated to be one of the most paramount plays of all time, carved by William Shakespeare. One of the sub-plots of the play is Hamlet’s adoration for Ophelia, the daughter of one of the King’s best counselors. Their bond is slightly shaky as the play evolves. Hamlet is truly absent from Denmark when Ophelia breathes her last. Ophelia’s father had lately been slain by Hamlet in a dreadful fortune, and she has now gone crazy, singing gibberish songs and offering people flowers that she has handpicked from the orchard. The reason of Ophelia’s demise has been questioned over the years. Did she...
2 Pages(500 words)Essay

...Hamlet Hamlet commences with the news of the demise of King Hamlet (Shakespeare line 55). Following this death, Denmark plans a war with the Norwegian Young Fortinbras. King Claudius, a new king of Denmark, marries late king’s wife, Queen Gertrude; however, Hamlet, the fallen king’s son is not happy with the marriage (Shakespeare 15). Ophelia falls for Hamlet, but Polonius, his father, dismisses it fearing that she will be heartbroken. Through a ghost of his late father, Hamlet finds out that King Claudius killed his father. The ghost instructs Hamlet to make Claudius pay for his deeds but spare Queen Gertrude....
2 Pages(500 words)Essay

...that emerged in the same period. Later, sexual abuses have risen to become common in families, with many of the cases going unreported because of the traditionally held beliefs on incest relationship. Many of the perpetrators of this crime will often try to threaten their victims, so that they are not known to be the people that committed the act. 5. Incest and incestuous desire in the Hamlet In the Hamlet, the theme of incest is evident in the entire play, it is frequent in many of the conversations about Claudius and Gertrude, the sister and brother-in-law, who have got married. Incestuous desire, in this play is evident in the relationship between Ophelia and Laertes, the manner in which Laertes...
6 Pages(1500 words)Essay
sponsored ads
Save Your Time for More Important Things
Let us write or edit the assignment on your topic "Read Hamlet" with a personal 20% discount.
GRAB THE BEST PAPER

Let us find you another Assignment on topic Read Hamlet for FREE!