Comments (0)
Add to wishlistDelete from wishlist
Cite this document
Summary
On August 11 2005, Air France Flight 358 departed Paris on a scheduled flight to Toronto with 12 crew and 297 passengers including two babies on board. Before their arrival at Toronto they were told that the weather forecast was not good with a possibility of thunderstorms. The…
Download full paperFile format: .doc, available for editing
HIDE THIS PAPERGRAB THE BEST PAPER98.7% of users find it useful 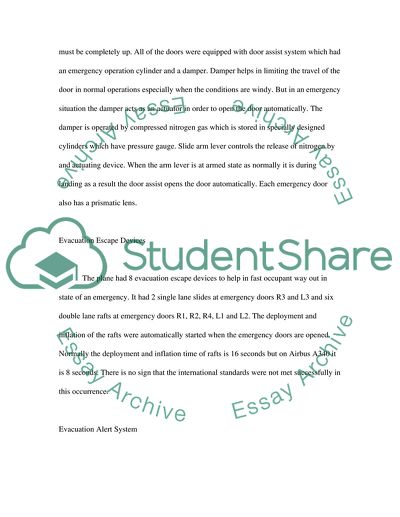 Running Head: Aircraft Analysis and Design Aircraft Analysis and Design of Introduction On August 11 2005, Air France Flight 358 departed Paris on a scheduled flight to Toronto with 12 crew and 297 passengers including two babies on board. Before their arrival at Toronto they were told that the weather forecast was not good with a possibility of thunderstorms. The plane was landing with the help of instrumental landing approach with auto pilot disengaged. When the plane touch down on runway at Toronto Pearson International Airport the groundspeed began to increase and the plane failed to stop on the long runway of about 9000 foot and finally plunged into a ravine and burst into flames. All of the 297 passengers and 12 crew members evacuated the aircraft before the fire reached the escape doors. All of the passengers and crew members survived with only 12 were seriously injured. People called it a miracle and the role played by the highly trained crew members in an emergency situation was appreciated.
Emergency Exits
The passenger cabin had eight emergency exit doors. Six of the doors are used in Type A emergency and the other two doors are used in Type l emergency. All of the doors were similar in operation. They had a design to be opened either from interior or the exterior. According to the operating manual of Airbus cabin crew the instruction states that opening the doors from interior in normal operations, the door control handle must be completely up. All of the doors were equipped with door assist system which had an emergency operation cylinder and a damper. Damper helps in limiting the travel of the door in normal operations especially when the conditions are windy. But in an emergency situation the damper acts as an actuator in order to open the door automatically. The damper is operated by compressed nitrogen gas which is stored in specially designed cylinders which have pressure gauge. Slide arm lever controls the release of nitrogen by and actuating device. When the arm lever is at armed state as normally it is during landing as a result the door assist opens the door automatically. Each emergency door also has a prismatic lens.
Evacuation Escape Devices
The plane had 8 evacuation escape devices to help in fast occupant way out in state of an emergency. It had 2 single lane slides at emergency doors R3 and L3 and six double lane rafts at emergency doors R1, R2, R4, L1 and L2. The deployment and inflation of the rafts were automatically started when the emergency doors are opened. Normally the deployment and inflation time of rafts is 16 seconds but on Airbus A340 it is 8 seconds. There is no sign that the international standards were not met successfully in this occurrence.
Evacuation Alert System
This system is not required by the international regulations but still it was installed on Air France Airbus A380. This system has flight attendant panel which contains push buttons and emergency evacuation flashing lights. In case of power failure the evacuation alert system is powered by emergency batteries which are located at the avionics unit.

Conclusion
All the passengers and crew survived the crash because of the highly trained crew members of Air France and the state of the art systems and devices which were installed on the plane. The crash was the biggest crises to hit the Toronto Airport and people called it a miracle.

The main belief of Islam

Has Composites in Aircraft Design made Aircraft Safer

...and analysis of composite structures: With applications to aerospace structures. New York, NY: John Wiley & Sons. Kassapoglou (2011) offers the design improvements that have been made with composite application in the completion of the aircraft. The list is offered on the developments that had seen more benefits in the fitting elements to complete a flexible material. The source lists the design improvements in the aircraft production with benefits offered in operation. Kundu, A. K. (2010). Aircraft Design. Cambridge Aerospace: Cambridge University Press. Aircraft...
5 Pages(1250 words)Essay

...﻿Discuss the role that stereotypes play in how race, class and gender are portrayed in the film. The movie “Crash” directed by Paul Higgins is about social and racial tension in Los Angeles which is inspired by real life incident. The movie has many stereotypes like gender, racial and class. In the movie, in the beginning there is a white wealthy man and woman walking on the street and, being the woman Jean move closer to her husband Jack when confronted by two black men walking towards them. The black men hijack their car and also steal purse which confirmed Jean’s negative feeling towards them. Even Jean shows racism towards a Mexican guy who comes to fix their lock at house. Jean, being the wife of District attorney...
3 Pages(750 words)Movie Review

Features of the Aircraft Design

...by wide use of computerized systems for structural analysis and design optimization. The aim to develop computerized structural studies and maximization of systems to permit a complete, non-linear transient analysis of gas flow through the entire engine incorporating heat transfer analysis, computational fluid dynamics and mechanical design parameters. This includes the study of cooled airfoils and active control of clearances and allowances in multifaceted assemblies. Sophisticated computational fluid dynamics systems, as well as faster Navier stokes and rapid inverse design, include the vital technologies for aerodynamic...
11 Pages(2750 words)Essay

Analysis of a aircraft mishap recovery/reclamation

...sure an escape course for the people aboard. It is, thus, important for local fire and rescue departments to understand: The fundamental principles and methods of fuel fire fighting, Aircraft design, including the different compartments and materials, Location of fuel tanks, engines, and exits; and lastly, External openings for exits, evacuation slides, and effective entry into the fuselage. Planning Preparation Local emergency managers and rescue providers may consider there is little or no danger of an airplane crashing in their community. New air disasters have demonstrated differently. It is not possible to foresee the location of future airplane disasters and, thus, it is important...
10 Pages(2500 words)Essay

...Aircraft Crash Survival Analysis and Design Ejection Seat D. Poojaa Kunar This paper brings out the significance of Ejection Seat as means of Air Crash Survival for fighter class of aircraft. With the expansion operational flying envelope of fighter aircraft and the increased value of human life, the requirements of ejection seats have increased manifold times. From the bail out era to the present day, ejection seats have improved exponentially. The modern day ejection seat not only provides a means of egress for the fighter pilot but also ensures that he does not suffer even the slightest of physical damage under all...
10 Pages(2500 words)Essay

...﻿Aircraft wing design Introduction Aircraft design is one of the fundamental engineering areas that has been accorded high importance and concern of the years. design ranging from the smallest element to the aero-plane itself is subjected to extreme research and incorporates a number of design consideration if success is to be achieved. Aircraft wing plays a vital role in its final operation and as such incorporates a number of fundamental design considerations. According to Kundu et al. (2003, p.241). it literally impossible for one to design an aircraft part without...
4 Pages(1000 words)Assignment

...Aircraft Wing Design Considerations Aircraft Wing Design Considerations Introduction In aircraft wing design the most imperative considerations involves shape and size of the airplane. Designing an effective airfoil requires comprehensive understanding of how the wings work in relation to drag and lift generation. Moreover, the aforementioned understanding would be domineering in designing a conceivable and workable aircraft as explored in the paper. Q 1 Various common misconceptions exist regarding aerofoil lift amongst educationists and learners. Firstly, some argue that the inherent...
10 Pages(2500 words)Book Report/Review

...Racism in the “Crash” Before watching the film I formulated the definition of racism as following: the belief in superiority of one race over another based on prejudices and resulting in reluctance to associate with representatives of another race. Indeed, such definition fits almost everyone in “Crash” as far as behavior and attitudes of characters are to the great extent influenced by prejudices they hold towards people of other nationalities. Noticeably, racism is not a property of one particular type of a person, instead, it is common for people from different backgrounds, social status or nationality. To start with, Jean Cabot is racist and prejudiced against African Americans and Latinos alike:...
2 Pages(500 words)Essay
sponsored ads
Save Your Time for More Important Things
Let us write or edit the essay on your topic "Aircraft Crash Analysis & Design" with a personal 20% discount.
GRAB THE BEST PAPER

Let us find you another Essay on topic Aircraft Crash Analysis & Design for FREE!