Comments (0)
Add to wishlistDelete from wishlist
Cite this document
Summary
Since its inception the company has gone through different transitional periods and has emerged as one of the leading and most recognized brand names in the world. The reason for…
Download full paperFile format: .doc, available for editing
HIDE THIS PAPERGRAB THE BEST PAPER92.7% of users find it useful 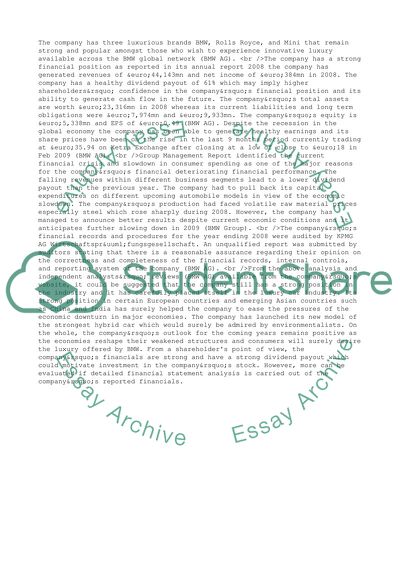 Company report – BMW AG This analysis paper looks at BMW AG which is a leading car manufacturing company based in Germany. Since its inception the company has gone through different transitional periods and has emerged as one of the leading and most recognized brand names in the world. The reason for selecting this company for the current review is the corporate intelligence that is obvious from its strategic positioning in the automobile industry and its immense potential to grow and remain market leader in luxury cars sector.
Bayerische Flugzeug-Werke (BMW) was founded on March 7, 1916 and went on to become a public limited company in 1917 and BMW AG was formally established. The early years of business were focused on serving military and designing and manufacturing aircraft engines, built-in engines and railway vehicle brakes. After ruins of WWII the company had tough time reviving its production plant and it was by 1947 that the company started production of two-wheeler. After rejecting Daimler’s takeover move the company emerged as a strong entity which specialized in manufacturing highest quality motor vehicles. The company has three luxurious brands BMW, Rolls Royce and Mini that remain strong and popular amongst those who wish to experience innovative luxury available across BMW global network (BMW AG).
The company has a strong financial position as reported in its annual report 2008 the company has generated revenues of €44,143mn and net income of €384mn in 2008. The company has a healthy dividend payout of 61% which may imply higher shareholders’ confidence in the company’s financial position and its ability to generate cash flow in the future. The company’s total assets are worth €23,316mn in 2008 whereas its current liabilities and long term obligations were €7,974mn and €9,933mn. The company’s equity is €5,338mn and EPS of €0.49 (BMW AG). Despite of the recession in the global economy the company has been able to generate healthy earnings and its share prices have been on the rise in the last 9 months period currently trading at €35.94 on Xetra Exchange after closing at low of close to €18 in Feb 2009 (BMW AG).
Group Management Report identified current financial crisis and slowdown in consumer spending as one of the major reasons of company’s financial deteriorating financial performance. The falling revenues within different business segments lead to lower dividend payout than previous year. The company had to pull back its capital expenditures on different upcoming automobile models in view of the economic slowdown. The company’s production had faced volatile raw material prices specially steel which rose by sharply during 2008. However, the company has managed to announce better results despite of current economic conditions and it anticipates further slowing down in 2009 (BMW Group).
The company’s financial records and procedures for the year ending 2008 were audited by KPMG AG Wirtschaftsprüfungsgesellschaft. Unqualified report was submitted by auditors stating that there is a reasonable assurance regarding their opinion on correctness and completesness of the financial records, internal controls and reporting system of the company (BMW AG).
From the above analysis and independent analysts’ reviews (BMW AG) available from the company’s website it could be suggested that the company still has a strong position in the industry and it has carefully placed itself in the luxury car industry. Its strong position in certain European countries and emerging Asian countries such as China and India has surely helped the company to ease of the pressures of the economic downturn in major economies. The company has launched its new model of strongest hybrid car which would surely be adnired by environmentalists. On the whole the company’s outlook for coming years remains positive as the economies reshape their weakened structures and consumers will surely desire for luxury offered by BMW. From a shareholders point of view the company’s financials are strong and has a strong dividend payout which could motivate investment in the company’s stock. However, more can be evaluated if detailed financial statement analysis is carried out of the company’s reported financials.

CHECK THESE SAMPLES OF Company report

...(2009 to 2011) by the World Travel Awards, the ultimate travel accolade worldwide (InterContinental 2012a). Also, the company is owned by the InterContinental Hotels Group (IHG), a mega-corporation that owns five other leading global hotel and resort brands. The other brands owned by IHG are Crowne Plaza, Hotel Indigo, Holiday Inn, Holiday Inn Express, Staybridge Suites and Candlewood Suites. Given that the InterContinental Hotel is a significant part of the IHG, most of the available research data is presented within the context of the IHG / group. For this reason, this report too shall evaluate this particular business within the same group context. 2.0. Analysis of the Internal and External...
12 Pages(3000 words)Essay

...?Report on Sizer Ltd Executive Summary 2. Remit 3. Background of Sizer Ltd. 4. Methods and Tools of Analysis 5. SWOT Analysis of Sizer i. Strength ii. Weaknesses iii. Opportunities iv. Threads v. Economic Challenges vi. Industrial Challenges 6. The Competitors Analysis 7. The Challenges 8. Employee Recruitment at Sizer Ltd. 9. Conclusion 10. Recommendation 11. Appendices 12. Reference 1. Executive summary Sizer Ltd is the global leader in manufacturing of presses for pellet production. Simultaneously, providing the after sales and technical support services to its client with ninety degree. From manufacturing and installation of modern orbit presses till the repair, maintenance and troubleshooting of the presses as well. The Sizer... tool to...
10 Pages(2500 words)Essay

...The Company Report: AstraZeneca Business AstraZeneca was formed on 6 April 1999 through the merger of Astra AB of Sweden and Zeneca Group PLC of the UK - two companies with similar science-based cultures and a shared vision of the pharmaceutical industry. AstraZeneca PLC, which discovers, develops, manufactures and markets prescription pharmaceuticals for important areas of healthcare, such as cardiovascular, gastrointestinal, neuroscience, oncology, respiratory and inflammation, and infection. The company has a strategic alliance with Cambridge Antibody Technology for the discovery and development of antibody therapeutics for inflammatory disorders. It employs more than 65,000 people worldwide and maintains nearly 40 research... and...
4 Pages(1000 words)Essay

...DaeSun Chung BC 290 Cadieux 3/18/2007 Executive Summary According to Fortune Magazine, Marriott International is the 89th best company to work for. One reason is that the company continues to expand both within the United States and overseas. Also, Marriott's estimated $11.55 billion in revenues for 2005 is proof that it will be around in the next century. Furthermore, Marriott International has consistently implemented its mission statement of quality service at reasonable rates. Marriott International is leading the hotel industry, well ahead of its main competitors of Hilton Hotels and MGM Mirage. It is also leading change and advancement within the industry with its recent decision to make all hotels...
3 Pages(750 words)Speech or Presentation

...Coca cola company report Introduction Coca Cola is an American multinational company. It mainly deals in manufacturing and selling of non alcoholic beverage. The company has its headquarters in Atlanta, Georgia. John Stith Pemberton invented Coca Cola in 1886 and the company was formed in 1892. The company operated its business throughout the world by franchisee distribution system. It is the world’s leading soft drinks manufacturing company which operates its business in more than 200 countries of the world. For more than a century the company continues through depression, prosperity, war & peace,...
13 Pages(3250 words)Essay

3 Pages(750 words)Assignment
sponsored ads
Save Your Time for More Important Things
Let us write or edit the assignment on your topic "Company report" with a personal 20% discount.
GRAB THE BEST PAPER

Let us find you another Assignment on topic Company report for FREE!