Comments (0)
Add to wishlistDelete from wishlist
Cite this document
Summary
For many years till date, the rivalry and competition between the two cola giants Pepsi-Cola and Coca-Cola has been a topic of discussion in the beverage industry all over the world. But according to the analysts this battle, which is being fought constantly over tenure of…
Download full paperFile format: .doc, available for editing
HIDE THIS PAPERGRAB THE BEST PAPER97.7% of users find it useful 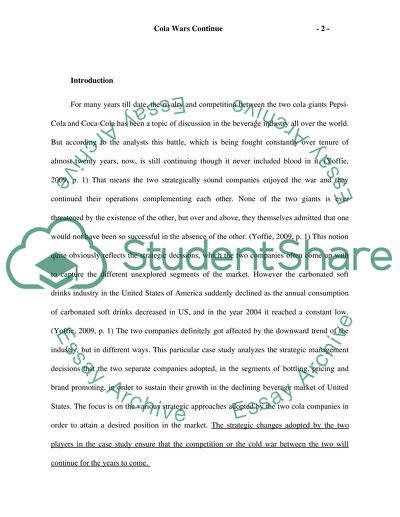 Extract of sample "Analysis - will upload"

Download file to see previous pages (Yoffie, 2009, p. 1) This notion quite obviously reflects the strategic decisions, which the two companies often come up with to capture the different unexplored segments of the market. However the carbonated soft drinks industry in the United States of America suddenly declined as the annual consumption of carbonated soft drinks decreased in US, and in the year 2004 it reached a constant low. (Yoffie, 2009, p. 1) The two companies definitely got affected by the downward trend of the industry, but in different ways. This particular case study analyzes the strategic management decisions that the two separate companies adopted, in the segments of bottling, pricing and brand promoting, in order to sustain their growth in the declining beverage market of United States. The focus is on the various strategic approaches adopted by the two cola companies in order to attain a desired position in the market. The strategic changes adopted by the two players in the case study ensure that the competition or the cold war between the two will continue for the years to come.
The foundation of Coca-Cola, which is the older of the two companies, dates back to the year 1886. A pharmacist named John Pemberton was the first to discover the formula for the potion and in the year of 1891, Asa Candler obtained the formula and with a specific objective started a sales force to distribute the product under the brand name of Coca-Cola. (Yoffie, 2009, p. 5) The first bottling franchise for the particular company was opened in the year 1899, and the growth rate was so substantial that within a gap of eleven years the company acquired about three hundred and seventy franchises in USA. (Yoffie, 2009, p. 5) With growth and popularity there were also direct threat to the brand image of Coca-Cola as there were an eminent number of imitators in the industry who ...Download file to see next pagesRead More
Share:
Tags
Cite this document
(“Case study analysis - will upload case study Example | Topics and Well Written Essays - 2500 words”, n.d.)
Case study analysis - will upload case study Example | Topics and Well Written Essays - 2500 words. Retrieved from https://studentshare.org/miscellaneous/1557661-case-study-analysis-will-upload-case-study

Perhaps one of the most conspicuous aspects of CNN is that it has an excellent contact network and reporters on the spo...
8 Pages(2000 words)Case Study
sponsored ads
Save Your Time for More Important Things
Let us write or edit the case study on your topic "Case study analysis - will upload case study" with a personal 20% discount.
GRAB THE BEST PAPER

Let us find you another Case Study on topic Case study analysis - will upload case study for FREE!