Comments (0)
Add to wishlistDelete from wishlist
Cite this document
Summary
Compare the arguments of Hoffman and Knight about the General Prologue of the Canterbury Tales and discuss how their arguments and/or your comparison might help us understand something about “pilgrimage.”
Chaucer’s General Prologue of the Canterbury Tales has been…
Download full paperFile format: .doc, available for editing
HIDE THIS PAPERGRAB THE BEST PAPER94.7% of users find it useful 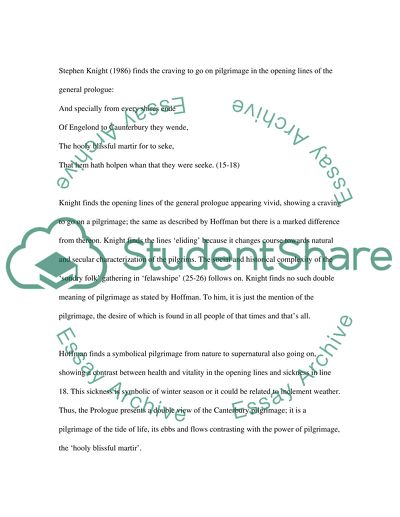 Download file to see previous pages According to Hoffman, critics of the Canterbury tales agree that portraits in the General Prologue are like “figures in a tapestry”. Commonplace about these portraits is the design of unity which has come out due to the outer body structure of the pilgrimage to Canterbury, as described by Chaucer, “Of sondry folk…In felaweshipe, and pilgrims were they alle”. According to Hoffman, the very fact that it is a pilgrimage is defined in the starting of the verse, here life is growing and flourishing where the pilgrims come together at the Tabard inn of Southwalk to visit the shrine of Thomas a Becket at Canterbury. Pilgrimage starts at the spring time, a time of procreation and this pilgrimage is just one of the many roles of life. A pilgrimage, thus, is the solemnizing of marriage between the months of March and April and pilgrims are just events in the calendar of nature but in the calendar of piety, there is a journey from nature to beyond nature, to the pure hug with the ‘hooly blisful martir’.
Knight finds the opening lines of the general prologue appearing vivid, showing a craving to go on a pilgrimage; the same as described by Hoffman but there is a marked difference from thereon. Knight finds the lines ‘eliding’ because it changes course towards natural and secular characterization of the pilgrims. The social and historical complexity of the ‘sondry folk’ gathering in ‘felawshipe’ (25-26) follows on. Knight finds no such double meaning of pilgrimage as stated by Hoffman. To him, it is just the mention of the pilgrimage, the desire of which is found in all people of that times and that’s all.
Hoffman finds a symbolical pilgrimage from nature to supernatural also going on, showing a contrast between health and vitality in the opening lines and sickness in line 18. This sickness is symbolic of winter season or it could be related to inclement weather. ...Download file to see next pagesRead More
Share:
Tags
Cite this document
(“1)Compare the ARGUMENTS of Hoffman and Knight about the General Prolog Essay”, n.d.)
Retrieved from https://studentshare.org/miscellaneous/1557488-1compare-the-arguments-of-hoffman-and-knight-about-the-general-prolog-of-the-canterbury-tales-and-discuss-how-their-arguments-andor-your-comparison-might-help-us-understand-something-about-either-englishness-or-pilgrimage

Picasso’s painting of Tauromachy was completed in 1934 as an etching to display a bullfight. The center of this particular etching displays a bullfight after the bull as been pierced with a spear. The focus of the etching is with the bullhead, which is opened and screaming in pain with the back of the head showing banderillas, or piercing from a spear. To one side of this is a woman’s head, which comes in front of the horse. She has an outstretched arm from the right-hand corner which is holding a handkerchief to throw into the arena. The etching is further accented with the horse’s body garment, which has a hole in the front leg and which is significant with the dressed horses that were used in bullfighting in P...
8 Pages(2000 words)Essay

As a result, there is considerable debate over whether world economies will gravitate toward adopting a common Anglo-American corporate governance structure or will...
84 Pages(21000 words)Dissertation
sponsored ads
Save Your Time for More Important Things
Let us write or edit the essay on your topic "1)Compare the ARGUMENTS of Hoffman and Knight about the General Prolog of the Canterbury Tales and discuss how their arguments and/or your comparison might help us understand something about EITHER Englishness or pilgrimage" with a personal 20% discount.
GRAB THE BEST PAPER

Let us find you another Essay on topic 1)Compare the ARGUMENTS of Hoffman and Knight about the General Prolog of the Canterbury Tales and discuss how their arguments and/or your comparison might help us understand something about EITHER Englishness or pilgrimage for FREE!