Comments (0)
Add to wishlistDelete from wishlist
Cite this document
Summary
Explain the way(s) depreciation affects a company’s balance sheet, income statement, and statement of cash flows. Next, tell Kathy whether the…
Download full paperFile format: .doc, available for editing
HIDE THIS PAPERGRAB THE BEST PAPER94.1% of users find it useful 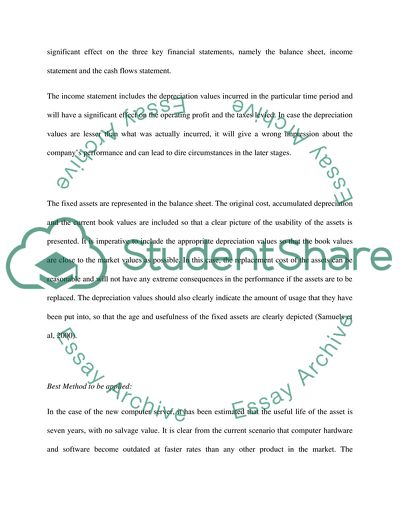 Explain to Kathy the factors that ought to be considered when applying the concept of depreciation to the value of the new server. Explain the way(s)depreciation affects a company’s balance sheet, income statement, and statement of cash flows. Next, tell Kathy whether the straight-depreciation is or is not the right methodology for the server and explain why.
This report analyzes the depreciation methods to be followed and the effects on the company’s statements.
Factors affecting Depreciation:
There are a number of factors to be considered when applying depreciation values to the new server. The most important factors include the usage, units of useful utilities obtained from the asset, the market value of the asset in the future, the rate at which the technology and the hardware becomes obsolete in the segment and in some cases the opportunity costs involved in purchasing the asset. The innovations in Information Technology segments and the accelerated release of upgrades in the computer segment play an important role in analyzing the value of the asset at a particular time period (Samuels et al, 2000). All these factors have to be considered in deciding the appropriate depreciation methodology for the computer server.
Effect of Depreciation:
The depreciation method followed has a great impact on the financial performance of the company. In other terms, the method applied and the values entered in the accounts have a significant effect on the three key financial statements, namely the balance sheet, income statement and the cash flows statement.
The income statement includes the depreciation values incurred in the particular time period and will have a significant effect on the operating profit and the taxes levied. In case the depreciation values are lesser than what was actually incurred, it will give a wrong impression about the company’s performance and can lead to dire circumstances in the later stages.
The fixed assets are represented in the balance sheet. The original cost, accumulated depreciation and the current book values are included so that a clear picture of the usability of the assets is presented. It is imperative to include the appropriate depreciation values so that the book values are close to the market values as possible. In this case, the replacement cost of the assets can be reasonable and will not have any extreme consequences in the performance if the assets are to be replaced. The depreciation values should also clearly indicate the amount of usage that they have been put into, so that the age and usefulness of the fixed assets are clearly depicted (Samuels et al, 2000).
Best Method to be applied:
In the case of the new computer server, it has been estimated that the useful life of the asset is seven years, with no salvage value. It is clear from the current scenario that computer hardware and software become outdated at faster rates than any other product in the market. The depreciation values based on the straight line method are computed and presented in the following section.
It is evident that the yearly deductions will be $ 12,143 which will not reflect the actual case and the company will be paying higher taxes in the early year. Hence straight line depreciation will not be the optimum method to be followed, as it will not reflect or be close to the actual market value of the computer server in the Fixed Assets of the Balance Sheet.
The best suited method to be followed in this case, is the ‘Reducing Balance’ method. The depreciation values in the early years will be very high in this method and it will reduce during the life of the asset. As the scrap value of the computer server is zero, a safe 50% depreciation rate is assumed in the calculations of the Reducing Balance method (Drury, 2005).
Reducing Balance (50%)
Year
Server Value
Depreciation
Book Value
0

CHECK THESE SAMPLES OF Depreciation Aspects in Accounting

...and the listing of an asset that is depreciating decreases in value each year until it is considered to have no value (Hoofman, 2009). After capitalizing, the item is allowed to depreciate over a period of time, such as 3 – 5 years of time. After depreciation the entire cost of the item is not revealed in the expenses at one time, but is divided over several years (Grant, 2001). The time period for depreciating an item is based on how long the item will sustain. Properties like land and building are depreciated out over a larger period of time whereas; items like vehicles depreciate over a period of 3-5 years which depends on the cost of...
6 Pages(1500 words)Essay

...over the period can be explained from the fact that the company current asset is increasing at an increasing rate while its current liabilities are increasing at a decreasing rate. 4.0Review of Director's Remuneration Report of BP for the year 2008 A company's compensation system for top employees also determines the financial reporting system. For example, if managers are compensated for generating high shareholder value, they will focus their attention on generating high value. In that case expenditures on items like research and development will be capitalised and not written off the profit and loss account. Also a fair depreciation and amortisation method will be applied to tangible and intangible...
17 Pages(4250 words)Essay

..."Accountants generally prefer to show fixed assets on the balance sheets of limited companies at their original cost, less an estimated amount of depreciation." 1.0 Introduction: Generally different accounting policies for depreciation are adopted by different commercial enterprises in order to phase out the value of the depreciable assets over the period of the useful life of the various assets. It is also necessary that the policies adopted by the company for accounting the depreciation is disclosed in the financial statements so that the analysts and other readers of the statements can appreciate the views presented...
10 Pages(2500 words)Essay

...in depreciation as an expense incurred in producing the revenue realized by the company that year (Marciano 2004). Capitalization under IFRS The effects of transitioning to IFRS may have adverse results for technology and companies that invest much on development and research. The requirement of capitalizing development costs upon meeting certain conditions can affect the profit and have other effects on in an organization. The U.S. GAAP has various that govern the accounting used in research and development costs. It allows specific treatment in accounting for certain scenarios. Its general rule to expense the development and research costs when they present. IFRS uses one...
5 Pages(1250 words)Research Paper

...﻿Lewis Driscoll and Delta Cargo Executive Summary The report attempted to find out the most desirable method of depreciation to be adopted by the company. To determine this various factors like tax outflow, managerial bonus etc have been taken into consideration. Finally a recommendation has also been given on aspects like asset disposal. The depreciable cost of the crane has been computed after making the necessary adjustments relating to capital expenditures and deducting the expected salvage value of the crane from the total cumulative cost of the asset. The reason for the treatment of the various costs i.e. whether it is a capital or revenue expenditure has also been discussed. The...
8 Pages(2000 words)Case Study
sponsored ads
Save Your Time for More Important Things
Let us write or edit the essay on your topic "Depreciation Aspects in Accounting" with a personal 20% discount.
GRAB THE BEST PAPER

Let us find you another Essay on topic Depreciation Aspects in Accounting for FREE!