Comments (0)
Add to wishlistDelete from wishlist
Cite this document
Summary
What has been the controversy surrounding the IMF austerity programs? What are examples of the IMF successes and failures?
The International Monetary Fund (IMF), along with…
Download full paperFile format: .doc, available for editing
HIDE THIS PAPERGRAB THE BEST PAPER91.8% of users find it useful 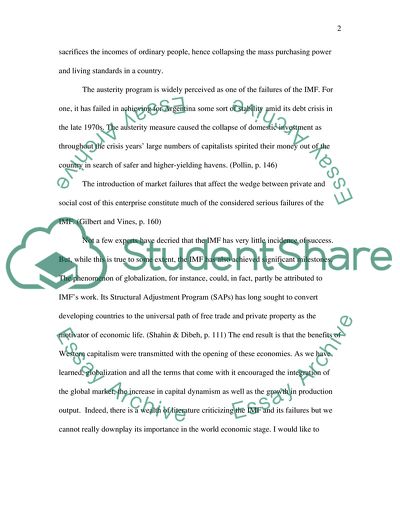 Your cousin wants to know, what do you think about the goal of the IMF’s aid to distressed countries? What has been the controversy surrounding the IMF austerity programs? What are examples of the IMF successes and failures?
The International Monetary Fund (IMF), along with all the organizations and treaties with noble intentions of helping countries develop and progress, is ideally a boon in the efforts to equalize the wealth gap between industrialized and developing countries. Its mandate, which is essentially the bail out of distressed nations in exchange for policy reforms, has experienced breakthroughs in the history of many countries’ struggle for development. In my view, the creation of such institutions is a laudable effort and involved outstanding foresight considering the current landscape of the world economy. However, its sweeping power and influence over a country could prove disastrous in the event of miscalculation or error in analysis.
In essence, the idea behind the IMF’s existence is crisis prevention rescuing nations by lending intermediation and surveillance. Policy reform is pertinent in the whole equation where the IMF is concerned and that is why its terms serves as objects of criticisms due to a popular perception of IMF’s manipulation and intrusion in a country’s sovereignty. One of the most controversial impositions of the IMF, for instance, is the austerity measure as condition to a borrowing country. “The IMF held that excessive government intervention was the fundamental cause of debt crisis. Their plan therefore involved eliminating public enterprises, sharply reducing government subsidies and deficit spending, weakening cost-of-living allowances, and decontrolling prices and exchange rates.” (Pollin, p. 146) This particular measure has been under fire because, although it achieved some success in increasing a country’s ability to service its debt, it sacrifices the incomes of ordinary people, hence collapsing the mass purchasing power and living standards in a country.
The austerity program is widely perceived as one of the failures of the IMF. For one, it has failed in achieving for Argentina some sort of stability amid its debt crisis in the late 1970s. The austerity measure caused the collapse of domestic investment as throughout the crisis years’ large numbers of capitalists spirited their money out of the country in search of safer and higher-yielding havens. (Pollin, p. 146)
The introduction of market failures that affect the wedge between private and social cost of this enterprise constitute much of the considered serious failures of the IMF. (Gilbert and Vines, p. 160)
Not a few experts have decried that the IMF has very little incidence of success. But, while this is true to some extent, the IMF has also achieved significant milestones. The phenomenon of globalization, for instance, could, in fact, partly be attributed to IMF’s work. Its Structural Adjustment Program (SAPs) has long sought to convert developing countries to the universal path of free trade and private property as the motivator of economic life. (Shahin & Dibeh, p. 111) The end result is that the benefits of Western capitalism were transmitted with the opening of these economies. As we have learned, globalization and all the terms that come with it encouraged the integration of the global market, the increase in capital dynamism as well as the growth in production output. Indeed, there is a wealth of literature criticizing the IMF and its failures but we cannot really downplay its importance in the world economic stage. I would like to endorse a school of thought, which seeks to curb the IMF’s power in order to balance its excesses with its significance in the world prosperity management.
Bibliography
Gilbert, Christopher, and Vines, David. “The IMF and its Critics.” Cambridge University Press, 2004
Pfeifer, Karen. “Does Structural Adjustment Spell Relief from Unemployment”: A Comparison of Four IMF “Success Stories” in the Middle East and North Africa.” In Shahin, W. and Dibeh, G.’s (ed.s) Earnings, Inequality, Unemployment, and Poverty in the Middle East and North Africa. Greenwood Press, 2000
Pollin, Robert. “Contours of Descent.” Verso, 2003. Read More
Share:
Tags
Cite this document
(“Global Economics Essay Example | Topics and Well Written Essays - 500 words - 1”, n.d.)
Global Economics Essay Example | Topics and Well Written Essays - 500 words - 1. Retrieved from https://studentshare.org/miscellaneous/1538078-global-economics

CHECK THESE SAMPLES OF Global Economics

Examp...
6 Pages(1500 words)Assignment
sponsored ads
Save Your Time for More Important Things
Let us write or edit the essay on your topic "Global Economics" with a personal 20% discount.
GRAB THE BEST PAPER

Let us find you another Essay on topic Global Economics for FREE!