Comments (0)
Add to wishlistDelete from wishlist
Cite this document
Summary
Augustine utilized Christian tenets in order to illustrate his position on morality and the law and offered the notion that laws which were unjust, or those which were in direct conflict to Christian philosophy, were laws that could justifiably be opposed using Christian…
Download full paperFile format: .doc, available for editing
HIDE THIS PAPERGRAB THE BEST PAPER96.5% of users find it useful 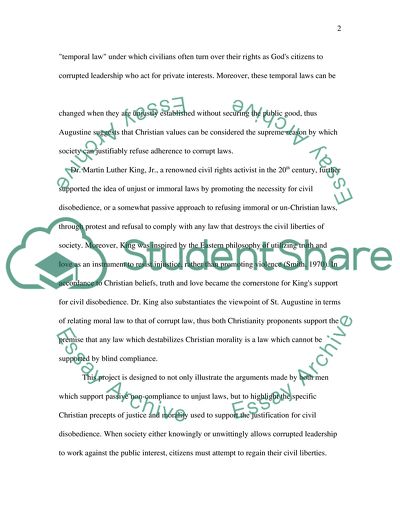 Download file to see previous pages St. Augustine illustrated his interpretation of unjust laws with his argument that the motivations of man, that being lust for authority and self-determination, undermined Gods precepts of morality and social equality. Augustine relates Gods law as that of "supreme reason" to which all men should conform (Evodius and Augustine dialogue), even those leaders who Augustine deems unreasonable for implementing legal systems that defy Gods intentions.
Having established St. Augustines comparisons of laws which he considers unjust, that is, those laws which defy Christian values, Augustine promotes the concept of "temporal law" under which civilians often turn over their rights as Gods citizens to corrupted leadership who act for private interests. Moreover, these temporal laws can be
changed when they are unjustly established without securing the public good, thus Augustine suggests that Christian values can be considered the supreme reason by which society can justifiably refuse adherence to corrupt laws.
Dr. Martin Luther King, Jr., a renowned civil rights activist in the 20th century, further supported the idea of unjust or immoral laws by promoting the necessity for civil disobedience, or a somewhat passive approach to refusing immoral or un-Christian laws, through protest and refusal to comply with any law that destroys the civil liberties of society. Moreover, King was inspired by the Eastern philosophy of utilizing truth and love as an instrument to resist injustice, rather than promoting violence (Smith, 1970). In accordance to Christian beliefs, truth and love became the cornerstone for Kings support for civil disobedience. Dr. King also substantiates the viewpoint of St. Augustine in terms of relating moral law to that of corrupt law, thus both Christianity proponents support the premise that any law which destabilizes Christian morality is a law which cannot be supported by blind compliance.
This project is designed to not only ...Download file to see next pagesRead More
Share:
Tags
Cite this document
(“St. Augustine would suport Dr. Marin Luther King Jr. ideas of civil Essay”, n.d.)
St. Augustine would suport Dr. Marin Luther King Jr. ideas of civil Essay. Retrieved from https://studentshare.org/miscellaneous/1537876-st-augustine-would-suport-dr-marin-luther-king-jr-ideas-of-civil-disobdience

... The of humanity of being just and fair has changed since the days of the late Dr. Martin Luther King Jr. In hisspeech, he stated that no matter how long it takes, justice and fairness continues to improve amongst people in society. This paper builds and proves that the same principle applies to the history of the US from 1877 up to the present. The civil rights movements in the 1960s fought hard for economic equality of all people despite the color of their skins (Brands et., p765). In the later years, the movement faced many frustrations from the government. Many union leaders were arrested while others died during protests (Brands et., p766). Despite, the hardship, their spirits never died. No matter how long it took, US now enjoys...
1 Pages(250 words)Essay

The youth not only bring with them the terror for the common citizens but also introduce huge dust of alcohol, abuse of drugs and many other forbidden things in the society. The future generation should be made to stay away from this peril as much as possible. Conformity and compliance with the law is the duty of every citizen and he must get this thing right in his system right from the starting of his youth.

Poverty and lack of education in the lives of young ones make them the most vulnerable amongst all human populations of any country or for that matter, the world. Committing a crime is not a remedy to get one’s hopes and needs fulfilled but there is a certain way to do everything and quite rightly so every s...
6 Pages(1500 words)Term Paper

John Locke above all other enlightenment era philosophers made the most impact on the Founders. The seeds of the Founders’ concept of law and freedom emanated from Britain. The Constitution was inspired by the Magna Carta and British philosopher John Locke helped to lay the foundation for the Founders’ deep belief in personal freedoms. Locke defined each individual as having the right to “life, liberty and estate” (Locke, 1960: 448). These words have an almost identical mirror in the beginning paragraphs of the Declaration of Independence written nearly 70 years later: “We hold these truths to be self-evident, that all men are created equal, that they are endowed by their Creator with certain unaliena...
7 Pages(1750 words)Term Paper

Through Horwitz's eyes one gets to see the interesting thinking that these Southerners had to tell that were related to history yet in some ways changed. It was a difficult situation many times the deeper he went into the South he went because he had to listen to tales of blatant racism as well as juxtapositions in thought that were so different from the northern way of thinking.
One example of this difference in thinking is when one of the Southerners said that the Civil War was about the Northerners trying to change a culture "it was a culture war in which Yankees imposed their imperialist and capitalistic will on the agrarian South, just as the English had done to the Irish and Scots…" (69). Many of the Southerners...
12 Pages(3000 words)Book Report/Review

Emily's immediate supervisor deems her ‘over-enthusiasm’ as an impediment to her efficiency at work. Thus, she is recommended to lessen the time she spends for every patient.
Although she understands her supervisor’s recommendation from a business operation’s point-of-view, she is still adamant in her belief that gaining customer insights is crucial in aiding the pharmacy in better developing its line-up of medicinal offers. Carrying this burden, Emily consults her mentor in The Medical Nation, Dr Hussa Al Husine.
The mentoring session with Dr Husine happens twice a week for three weeks after Emily’s daily working period. Even without having a firm background in professional coaching, Emily thin...
10 Pages(2500 words)Coursework
sponsored ads
Save Your Time for More Important Things
Let us write or edit the essay on your topic "St. Augustine would suport Dr. Marin Luther King Jr. ideas of civil disobdience" with a personal 20% discount.
GRAB THE BEST PAPER

Let us find you another Essay on topic St. Augustine would suport Dr. Marin Luther King Jr. ideas of civil disobdience for FREE!