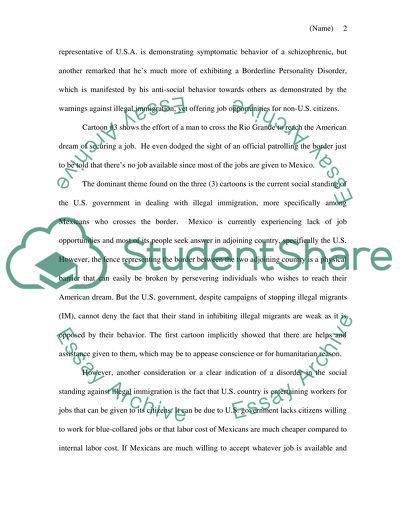 Download file to see previous pages as depicted by the signage of “Maps to U.S.A.”
Cartoon #2 shows that the officials of U.S.A. government projects conflicting messages to people of Mexico. U.S.A. offers job to immigrants from Mexico but strictly enforces stoppage of illegal immigration. Thus, people from the other side of the fence assessed the government as having a disorder. Borderline personality disorder is described as “Socially more like the neurotic but they behave vocationally more like the schizophrenic.  Borderline patients act out in a variety of ways: Self destructive acts, destructive acts towards others, anti social behavior, such as drug and alcohol abuse” (Rosberg, 2006). The cartoon showed ironic remarks by one viewer asking if the representative of U.S.A. is demonstrating symptomatic behavior of a schizophrenic, but another remarked that he’s much more of exhibiting a Borderline Personality Disorder, which is manifested by his anti-social behavior towards others as demonstrated by the warnings against illegal immigration, yet offering job opportunities for non-U.S. citizens.
Cartoon #3 shows the effort of a man to cross the Rio Grande to reach the American dream of securing a job. He even dodged the sight of an official patrolling the border just to be told that there’s no job available since most of the jobs are given to Mexico.
The dominant theme found on the three (3) cartoons is the current social standing of the U.S. government in dealing with illegal immigration, more specifically among Mexicans who crosses the border. Mexico is currently experiencing lack of job opportunities and most of its people seek answer in adjoining country, specifically the U.S. However, the fence representing the border between the two adjoining country is a physical barrier that can easily be broken by persevering individuals who wishes to reach their American dream. But the U.S. government, despite campaigns of stopping ...Download file to see next pagesRead More
Share:
Tags
Cite this document
(“Social Psychologhy Essay Example | Topics and Well Written Essays - 1000 words”, n.d.)
Social Psychologhy Essay Example | Topics and Well Written Essays - 1000 words. Retrieved from https://studentshare.org/miscellaneous/1537787-social-psychologhy

CHECK THESE SAMPLES OF Social Psychologhy

Soon a retail industry was built up and the community began to grow and is considered to be a society with a civic nature (Learning Communities in Education and Training, 2009). The community of Broken Hill can be considered to be highly diverse with a census that was conducted in the area in 1996 showed that out of the then population there were 961 people who came from overseas and a large amount of those was not from an English speaking nation. The large composition of the population in the community at the time was aboriginals or Torres Strait Islanders. Broken Hill thus shows a varying ethnic community and a diverse mindset considering a large proportion of the people are from nations such as Greece, Malta and even Italy (Lea...
6 Pages(1500 words)Case Study
sponsored ads
Save Your Time for More Important Things
Let us write or edit the essay on your topic "Social Psychologhy" with a personal 20% discount.
GRAB THE BEST PAPER

Let us find you another Essay on topic Social Psychologhy for FREE!