Comments (0)
Add to wishlistDelete from wishlist
Cite this document
Summary
We discuss the possible reasons why this approach has been preferred to legislation in the UK and contrast to that adopted in the…
Download full paperFile format: .doc, available for editing
HIDE THIS PAPERGRAB THE BEST PAPER97.7% of users find it useful 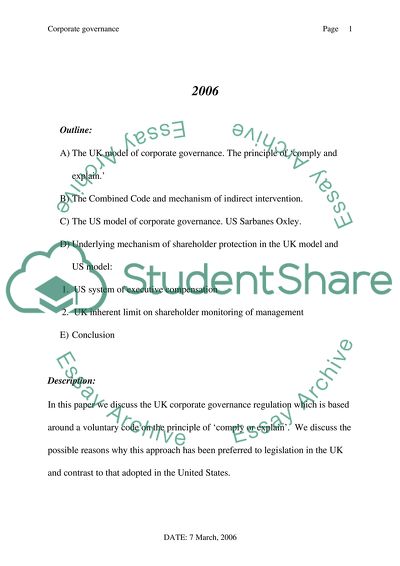 Download file to see previous pages Many efforts were made to facilitate governance mechanisms. These are introduced by the law “relating to directors’ duties, supervision via non-executive directors, executive compensation agreements, managerial labour markets that respond to past performance, the market for corporate control, discipline exercised by creditors, and competitive product markets”. (Armour, Deakin & Konzelmann, 2003)
The mutual result of the Report of Cadbury Committee (1992), the Greenbury Committee (1995) and the Hampel Committee (1997) was the Combined Code. The Code is voluntary. However companies are required to report compliance with the code or explain the reason why this compliance is not possible.
The Code includes a number of principles which serve the ground for the measurement of governance practices of companies. The principles highlight the importance of non-executive directors and independent directors for supervision of executives. Other principle recommendations are separation of chairman and CEO positions with the board chairman monitoring the performance of management; functioning of audit committee with each board. (Black et.al., 1994)
Along with these principles the code highlighted the importance of automatic re-election of directors at least every three years, remuneration and audit with a major role in each case for non-executive and independent directors and the disclosure to shareholders of policy concerning remuneration and of service contracts. (Armour, Deakin & Konzelmann, 2003)
Committees recommendations are supported by key institutions - the Bank of England, the Confederation of British Industry, and the London Stock Exchange. That’s why the Combined Code proved to be effective in provision of high level of compliance.
For example, in 1999 PIRC found that 87% of their sample of listed UK companies had separated the roles of Chairman and CEO, and 93% had ...Download file to see next pagesRead More
Share:
Tags
Cite this document
(“Corporate governance Essay Example | Topics and Well Written Essays - 1250 words - 1”, n.d.)
Corporate governance Essay Example | Topics and Well Written Essays - 1250 words - 1. Retrieved from https://studentshare.org/miscellaneous/1536136-corporate-governance

CHECK THESE SAMPLES OF Corporate governance

... at what merging is its disadvantages or problems and its benefits from a perspective of corporate governance. Definition Corporate governance is a broad term that encompasses many aspects as concerns the business. It may be said to be the way in which any business that exists is run and conducted and includes the rules and laws by which the partners of the firms must abide which are not a choice but an obligation. Any firm constitutes stakeholders who may be the management, directors and shareholders. Within them, a relationship is simply corporate governance. It also may mean the structuring of the objectives and goals of the firm and how to achieve them. All these are aimed at creating business merger or simply a takeover. A merger...
4 Pages(1000 words)Essay

..., control, coordinate the business in terms of managing the assets, processes and systems within the organizational setting (Pounds, 2008, YouTube video). Corporate governance is the legal as well as organizational framework, or certain principles and processes by which corporations are governed. Corporate governance thus relates to powers, accountability and relationships of those people who are involved in the direction and controlling of the corporation (Plessis, Hargovan and Bagaric, 2010, p. 4). As Tricker (2012, p. 4) pointed out, all different types of corporate entities need governing body. For a company, the governing body is its board of directors, and for other types of business firms, it may be a council, a court, a committee...
3 Pages(750 words)Essay

Critics of the excessive packages are of the opinion that such high packages reflect ‘pay for failure’ and do not take in to account the financial performance of the company (Solomon, 2007 p. 40). Additionally, most of the directors are geared at self-interests, thus undermining the ability of the shareholders to receive a fair return for their investments (Barty and Jones, 2012 p.14).
According to a recent report by the High Pay Commission, there has been a drastic growth in directors’ packages over the last thirty years. According to the report, directors’ packages have risen by about 5,000 percent in the last thirty years while the average income worker has increased by only 300 percent. The report...
6 Pages(1500 words)Coursework
sponsored ads
Save Your Time for More Important Things
Let us write or edit the essay on your topic "Corporate governance" with a personal 20% discount.
GRAB THE BEST PAPER

Let us find you another Essay on topic Corporate governance for FREE!