Comments (0)
Add to wishlistDelete from wishlist
Cite this document
Summary
By “consumption” Quindlen is referring to the tendency the American people have to use everything that our land has to offer for their benefit…
Download full paperFile format: .doc, available for editing
HIDE THIS PAPERGRAB THE BEST PAPER94.7% of users find it useful 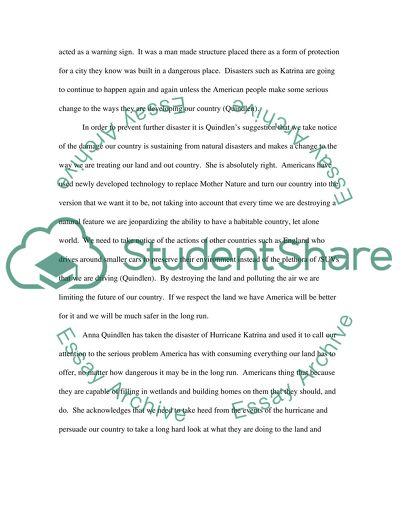 In her article, “Don’t Mess with Mother,” Anna Quindlen addresses the problem of “consumption” by today’s society. By “consumption” Quindlen is referring to the tendency the American people have to use everything that our land has to offer for their benefit without taking into consideration the long-term ramifications of their actions. According to Quindlen, disasters such as hurricane Katrina are more self-inflicted than everyone seems to think and I think she is absolutely right. America is so obsessed with what they are capable of making and building that they are violating some of the natural elements of our land, putting a great many people at risk on a daily basis.
Hurricane Katrina was a widely publicized natural disaster greater than any our country has ever seen before. The devastation has been unimaginable, but is it possible that we are to blame for the destruction of New Orleans and the surrounding areas that were destroyed by the storm? Built on land that sits below sea level, it is a miracle that New Orleans survived as long as it did without such a disaster taking place (Quindlen). Unfortunately, the American people believe so strongly that nothing like this could happen that the government, knowing we were going to have a “monstrous” hurricane season, took no efforts to prepare relief efforts if a storm like Katrina did strike (Quindlen).
New Orleans is not the only place that is at risk of disaster by Mother Nature. Americans have taken it upon themselves to build thing where they were never intended to be, over canyons, along the water, and on top of wetlands (such as New Orleans). The levy in New Orleans failed for one reason; it was never intended by nature to be there in the first place. The simple fact that a levy needed to be built in the first place should have acted as a warning sign. It was a man made structure placed there as a form of protection for a city they know was built in a dangerous place. Disasters such as Katrina are going to continue to happen again and again unless the American people make some serious change to the ways they are developing our country (Quindlen).
In order to prevent further disaster it is Quindlen’s suggestion that we take notice of the damage our country is sustaining from natural disasters and makes a change to the way we are treating our land and out country. She is absolutely right. Americans have used newly developed technology to replace Mother Nature and turn our country into the version that we want it to be, not taking into account that every time we are destroying a natural feature we are jeopardizing the ability to have a habitable country, let alone world. We need to take notice of the actions of other countries such as England who drives around smaller cars to preserve their environment instead of the plethora of /SUVs that we are driving (Quindlen). By destroying the land and polluting the air we are limiting the future of our country. If we respect the land we have America will be better for it and we will be much safer in the long run.
Anna Quindlen has taken the disaster of Hurricane Katrina and used it to call our attention to the serious problem America has with consuming everything our land has to offer, no matter how dangerous it may be in the long run. Americans thing that because they are capable of filling in wetlands and building homes on them that they should, and do. She acknowledges that we need to take heed from the events of the hurricane and persuade our country to take a long hard look at what they are doing to the land and resources we have. It is not too late to change the patterns of “consumption” by Americans.
Works Cited
Quindlen, Anna. “Don’t Mess with Mother.” Newsweek. 12 December 2005
Read More
Share:
Tags
Cite this document
(“Contemporary American consumption Essay Example | Topics and Well Written Essays - 500 words”, n.d.)
Retrieved from https://studentshare.org/miscellaneous/1535626-contemporary-american-consumption

2. “The calm, deliberate composure with which he spoke of his late deeds and intentions, the expression of his fiendlike face when excited by enthusiasm, still bearing the stains of the blood...
9 Pages(2250 words)Assignment
sponsored ads
Save Your Time for More Important Things
Let us write or edit the essay on your topic "Contemporary American consumption" with a personal 20% discount.
GRAB THE BEST PAPER

Let us find you another Essay on topic Contemporary American consumption for FREE!