Comments (0)
Add to wishlistDelete from wishlist
Cite this document
Summary
The Canadian International Development Agency (CIDA) is Canada’s federal agency tasked in planning, devising, and executing most of the country’s development cooperation program. The main priorities of CIDA is the reduction and gradual eradication of poverty and contribute…
Download full paperFile format: .doc, available for editing
HIDE THIS PAPERGRAB THE BEST PAPER92.4% of users find it useful 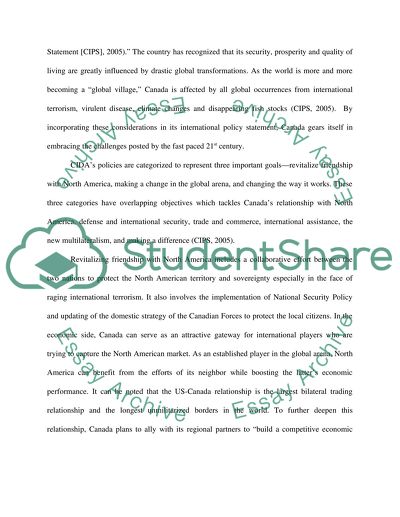 Download file to see previous pages veloping countries, Canadian organizations, institutions and business, as well as international organization and agencies (Canadian International Development Agency [CIDA], 2005).
One of the most significant tasks of the CIDA is the crafting of Canada’s international policy statement which serves as the platform of the country’s international development efforts. This year, the agency releases its International Policy Statement which was designed to promote its thrusts suited to the current world situation.
CIDA’s policies are geared in promoting international development. This year’s international policy statement is focused on Canada’s foreign policy as “the world is changing, quickly, radically, and these changes matter to Canada—not in abstract terms, and not only to students of international relations but tangibly to everyone (Canada’s International Policy Statement [CIPS], 2005).” The country has recognized that its security, prosperity and quality of living are greatly influenced by drastic global transformations. As the world is more and more becoming a “global village,” Canada is affected by all global occurrences from international terrorism, virulent disease, climate changes and disappearing fish stocks (CIPS, 2005). By incorporating these considerations in its international policy statement, Canada gears itself in embracing the challenges posted by the fast paced 21st century.
CIDA’s policies are categorized to represent three important goals—revitalize friendship with North America, making a change in the global arena, and changing the way it works. These three categories have overlapping objectives which tackles Canada’s relationship with North America, defense and international security, trade and commerce, international assistance, the new multilateralism, and making a difference (CIPS, 2005).
Revitalizing friendship with North America includes a collaborative effort between the two nations to protect the North ...Download file to see next pagesRead More
Share:
Tags
Cite this document
(“International Policy statement-development (Canada) Essay”, n.d.)
International Policy statement-development (Canada) Essay. Retrieved from https://studentshare.org/miscellaneous/1535171-international-policy-statement-development-canada

... of organizations culture towards problem solving: Employee involvement is crucial in the organizational change. The organizational change should be covering the entire organization starting from the top to down. There should be a change in the attitudes and behaviors of the company. In order to introduce change, the company should determine the strategy of producing the best results. Client and Practitioner Considerations: The organization should choose the organization development practitioner i.e. whether internal or external consultant. Consulting with both change agents has its own advantages and disadvantages. The internal practitioner may be some top level professionals like Vice President, Human Resource and a supporting team...
7 Pages(1750 words)Case Study

Let us find you another Essay on topic International Policy statement-development (Canada) for FREE!