Small and Medium Enterprises in an International Cont - Essay Example

Comments (0)
Add to wishlistDelete from wishlist
Cite this document
Summary
In the early 1990s , Noni Spiers a stay at home mom, to satisfy her urge to be creative and to add to her family income started to design wedding gowns. She had a diploma in fashion design and she knew stitching. Hence, she started making wedding gowns which were put to sale in her mother's garage…
Download full paperFile format: .doc, available for editing
HIDE THIS PAPERGRAB THE BEST PAPER97.7% of users find it useful 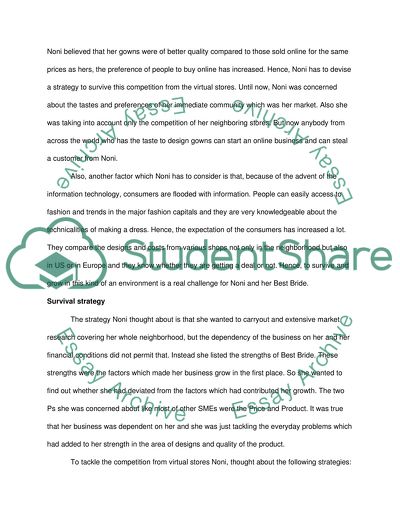 Extract of sample "Small and Medium Enterprises in an International Cont"

Download file to see previous pages After 2 years, she moved to a new place in the same locality of North Yorkshire where there was a separate place for showcasing the new designs and she had a workshop for stitching. She had hired tailors and bought new machines and had started to produce dresses for various sizes. Now in 2007, Noni has a team of designers working for her for which she is the creative head. She has a tailoring place, where she has a group of tailors to bring her designs into form and shape. The total employee strength had become 75. The development of her business was financed through bank and Noni was able tor repay all of her bank loans within a period of eight years and by 2000 the business was established with steady profits.
But recently there is a lull in the business. She had a few competitors in the area like the Jesslyn and the Mctavish families who were also making wedding gowns along with other gents and ladies formal wear. But Noni's designs, price and quality was much appreciated by the residents and in spite of the competition she was able to grow.
Analysis of the reasons for recent slump in business showed that it was because of the e- commerce. After the advent of the internet, people were exposed to a lot of online sources, it was easier for people to buy new and used wedding gowns at very competitive prices. Though Noni believed that her gowns were of better quality compared to those sold online for the same prices as hers, the preference of people to buy online has increased. Hence, Noni has to devise a strategy to survive this competition from the virtual stores. Until now, Noni was concerned about the tastes and preferences of her immediate community which was her market. Also she was taking into account only the competition of her neighboring stores. But now anybody from across the world who has the taste to design gowns can start an online business and can steal a customer from Noni.
Also, another factor which Noni has to consider is that, because of the advent of the information technology, consumers are flooded with information. People can easily access to fashion and trends in the major fashion capitals and they are very knowledgeable about the technicalities of making a dress. Hence, the expectation of the consumers has increased a lot. They compare the designs and costs from various shops not only in the neighborhood but also in US or in Europe and they know whether they are getting a deal or not. Hence, to survive and grow in this kind of an environment is a real challenge for Noni and her Best Bride.
Survival strategy
The strategy Noni thought about is that she wanted to carryout and extensive market research covering her whole neighborhood, but the dependency of the business on her and her financial conditions did not permit that. Instead she listed the strengths of Best Bride. These strengths were the factors which made her business grow in the first place. So she wanted to find out whether she had deviated from the factors which had contributed her growth. The two Ps she was concerned about like most of other SMEs were the Price and Product. It was true that her business was dependent on her and she was just tackling the everyday problems which had added to her strength in the area of designs and quality of the product.
To tackle the competition from virtual stores Noni, thought about the following strategies:
1. Concentrate on the promotion
2. Enter new ...Download file to see next pagesRead More
Share:
Tags
Cite this document
(“Small and Medium Enterprises in an International Cont Essay”, n.d.)
Small and Medium Enterprises in an International Cont Essay. Retrieved from https://studentshare.org/miscellaneous/1534619-small-and-medium-enterprises-in-an-international-cont

“Small and Medium Enterprises in an International Cont Essay”, n.d. https://studentshare.org/miscellaneous/1534619-small-and-medium-enterprises-in-an-international-cont.
Comments (0)
Click to create a comment or rate a document

...﻿Small and Medium Enterprises Questions 1: The Impact of 2008 Recession on SMEs Before the recession that began in 2008, SMEs were performing well and could access credit from financial institution to expand their operations. However, the recession brought about uncertainties on the future performance of businesses. Thus, small and medium enterprises could not easily access credit. The credit approval rates reduced not only for SMEs but also for large institutions as well. The recession weakened the ability of lenders to meet the demand for loans especially without security. The economic downturn brought about financial difficulties in SMEs and at the same time, lenders could not guarantee access to additional funds. Some of the SMEs were...
12 Pages(3000 words)Essay

Civil Aviation Administration of China (CAAC) – undoubtedly advanc...
7 Pages(1750 words)Assignment
sponsored ads
Save Your Time for More Important Things
Let us write or edit the essay on your topic "Small and Medium Enterprises in an International Cont" with a personal 20% discount.
GRAB THE BEST PAPER

Let us find you another Essay on topic Small and Medium Enterprises in an International Cont for FREE!