Comments (0)
Add to wishlistDelete from wishlist
Cite this document
Summary
My father has passed on many words of wisdom to me over the years; but the one which I was reminded of on reading 'Paul's Case' by Willa Cather was the one about levels of maturity. My father always believed that many people go through two levels of immaturity before reaching the final level of maturity…
Download full paperFile format: .doc, available for editing
HIDE THIS PAPERGRAB THE BEST PAPER92.8% of users find it useful 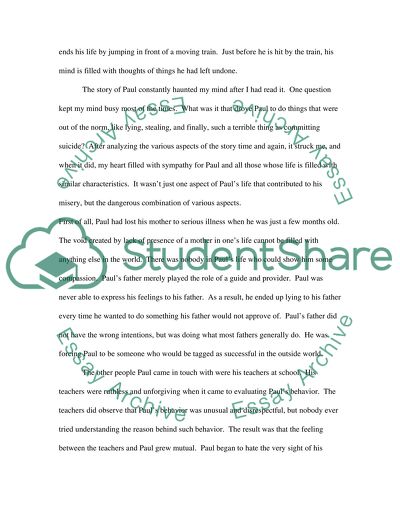 Download file to see previous pages The most tragic part in Paul's story is that before deciding on putting an end to his life, Paul is able to reach the second level, but not the final one.
'Paul's Case' is a tragic story of a boy who is so different from the rest of the crowd that he is unable to satisfy the expectations of people around him. Paul is surrounded by teachers who have an endless list of unacceptable behavior on Paul's part and a father who expects much more than Paul is ready to give. Paul tries to fit in, to some extent, by putting up pretence when he is confronted by his teachers and father. The only time he is not pretending is when he is ushering at Carnegie Hall. At a later stage, Paul is forced by his teachers to quit school and father restrains him from visiting Carnegie Hall. Paul works at Denny and Carson's office for a while and on finding an opportunity to cheat them off some money, he flees to New York hoping to attain all that he never had but always craved for. On realizing he could never make it in this world and never be able to get rid of his past life, he makes a drastic and extreme decision. Paul ends his life by jumping in front of a moving train. Just before he is hit by the train, his mind is filled with thoughts of things he had left undone.
The story of Paul constantly haunted my mind after I had read it. ...
It wasn't just one aspect of Paul's life that contributed to his misery, but the dangerous combination of various aspects.
First of all, Paul had lost his mother to serious illness when he was just a few months old. The void created by lack of presence of a mother in one's life cannot be filled with anything else in the world. There was nobody in Paul's life who could show him some compassion. Paul's father merely played the role of a guide and provider. Paul was never able to express his feelings to his father. As a result, he ended up lying to his father every time he wanted to do something his father would not approve of. Paul's father did not have the wrong intentions, but was doing what most fathers generally do. He was forcing Paul to be someone who would be tagged as successful in the outside world.
The other people Paul came in touch with were his teachers at school. His teachers were ruthless and unforgiving when it came to evaluating Paul's behavior. The teachers did observe that Paul's behavior was unusual and disrespectful, but nobody ever tried understanding the reason behind such behavior. The result was that the feeling between the teachers and Paul grew mutual. Paul began to hate the very sight of his classroom and was always successful in finding new ways to upset the teachers. According to my understanding, Paul craved for appreciation for what he was. He longed for someone who could understand his likes and dislikes. In the entire story, there is no mention of a friend in whom Paul could confide. Though his painting teacher empathizes with him, Paul is not aware of this fact. The disapproval of everyone ...Download file to see next pagesRead More
Share:
Tags
Cite this document
(“Pauls Case by Willa Cather Book Report/Review Example | Topics and Well Written Essays - 750 words”, n.d.)
Retrieved from https://studentshare.org/miscellaneous/1533819-pauls-case-by-willa-cather

CHECK THESE SAMPLES OF Pauls Case by Willa Cather

Assuming that the trust held by the trustees under the father’s will trust in favor of Sally and the trust agreement in respect of the horse are valid trusts the question of cetainties are not valid except to the extent that a new trust is created in favor of Sally’s children and thereby extinguishing the previous trusts. This is particularly so with respect to the will trust. The trust agreement over the horse only involves the disposition of a ben...
7 Pages(1750 words)Coursework

There are at least seven issues raised by the parties in this case. These issues were as follows: (1) whether or not a fair trial is possible in this case considering the time between the composition of the wo...
6 Pages(1500 words)Case Study
sponsored ads
Save Your Time for More Important Things
Let us write or edit the book report/review on your topic "Pauls Case by Willa Cather" with a personal 20% discount.
GRAB THE BEST PAPER

Let us find you another Book Report/Review on topic Pauls Case by Willa Cather for FREE!