Comments (1)
Add to wishlistDelete from wishlist
Cite this document
Summary
United States' invasion of Iraq was questioned by many and the same critics have now invoked Vietnam as an analogy. Though President Bush rejected this analogy, doubts regarding United States' ability to form a stable government in Iraq persist, causing many to draw comparison between this invasion and US' military attack against Vietnam back in 1960s…
Download full paperFile format: .doc, available for editing
HIDE THIS PAPERGRAB THE BEST PAPER96% of users find it useful 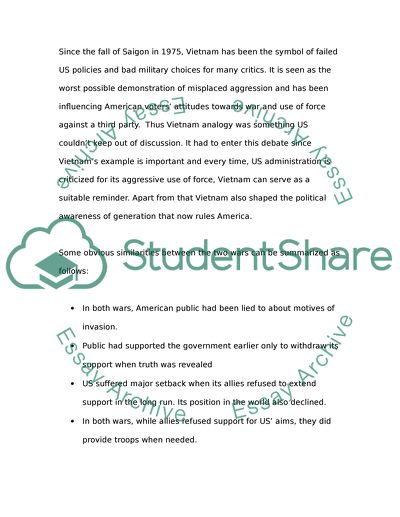 Extract of sample "Vietnam vs. Iraq"

Download file to see previous pages They focus more on the differences and thus any similarity, if there exists any, is rejected off-hand. Instead of juxtaposing Iraq with Vietnam, which serves as a symbol of shameful defeat for the US, these proponents who compare this war instead with Nazi or Imperial Japan that were subdued by US forced during the Second World War. There is yet another group that feels that some similarities exist but there are differences too. for example counterinsurgency operations were involved in both cases but there is no force like North Vietnam present for Iraq.
Since the fall of Saigon in 1975, Vietnam has been the symbol of failed US policies and bad military choices for many critics. It is seen as the worst possible demonstration of misplaced aggression and has been influencing American voters' attitudes towards war and use of force against a third party. Thus Vietnam analogy was something US couldn't keep out of discussion. It had to enter this debate since Vietnam's example is important and every time, US administration is criticized for its aggressive use of force, Vietnam can serve as a suitable reminder. Apart from that Vietnam also shaped the political awareness of generation that now rules America.
When we closely study the case in point however more differences than similarities seem to exist between the two experiences. Vietnam in 1960s was a powerful nation and one that had long resisted against foreign domination. Sense of nationalism was strong, mobilized against the French by communists and thus people took extreme pride in their own political and social structure. They did not need a third party to tell them what was right for them. Iraq on the other hand was a weaker nation plagued by years of warfare and internal conflicts. Nationalism was missing because of extreme religious and ethnic tensions.
In Vietnam, United States had adopted a vastly different approach of aggression. It had started out as an insurgency that later bloomed into full scale war. That was not the case in Iraq where it had been a full-fledge war from the beginning though it later transformed into insurgency. Similarly while Vietnam was well trained and its military strength was a force to reckon with, Iraq was a fragmented military power with no support from external sources. Apart from this, we also need to understand United States' global strategic position then and now. In 1960s, there were other powers that could keep United States' military aggression in check. Soviet Union could act as a great restraining force but that was not the case now. United States today enjoys a more powerful position globally and it has greater presence in the world than it had with USSR acting as a formidable force. It was now easier for the US to move ahead and overthrow the government in Iraq which was neither the intention nor the result of war with Vietnam. ...Download file to see next pagesRead More
Share:
Tags
Cite this document
(“Vietnam vs. Iraq Essay Example | Topics and Well Written Essays - 2000 words”, n.d.)
Vietnam vs. Iraq Essay Example | Topics and Well Written Essays - 2000 words. Retrieved from https://studentshare.org/miscellaneous/1533684-vietnam-vs-iraq

zb
zbrown added comment 1 year ago
Student rated this paper as
Perfect work done on the "Vietnam vs. Iraq". I think it is the best document I have seen so far.

CHECK THESE SAMPLES OF Vietnam vs. Iraq

The main differences between the approaches made by American society and the Barbarian society were the purpose behind the invasions. The American society invaded Afghanistan after facing violent attacks from the Islamic anti-social groups. However, the Barbarian invasions in Rome signified the use of power by the leaders in order to capture territories and increase their kingdom. The main purpose behind the attacks made by the U.S. administration was to eliminate the terrorist groups from the world and make the world free f...
10 Pages(2500 words)Essay
sponsored ads
Save Your Time for More Important Things
Let us write or edit the essay on your topic "Vietnam vs. Iraq" with a personal 20% discount.
GRAB THE BEST PAPER

Let us find you another Essay on topic Vietnam vs. Iraq for FREE!