Harold and Maude A Meditation on Life and Death - Essay Example

Comments (0)
Add to wishlistDelete from wishlist
Cite this document
Summary
Harold and Maude's influence is apparent even today when film critics find its remnants in last year's movie Mrs. Palfrey at the Claremont also. Film critic Scott Holleran says as much in one of his reviews. The Director of Mrs. Palfrey at the Claremont, for Holleran, "subtly exploits inevitable Harold and Maude comparisons…
Download full paperFile format: .doc, available for editing
HIDE THIS PAPERGRAB THE BEST PAPER98.8% of users find it useful 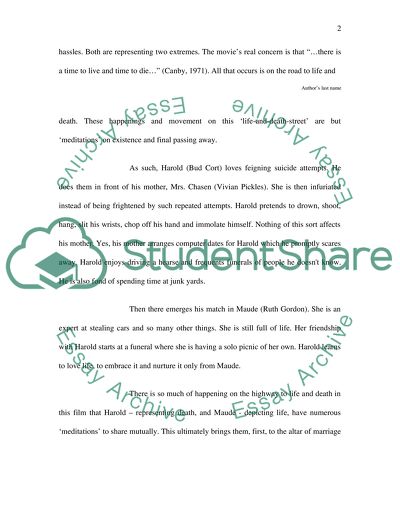 Download file to see previous pages It is also a well known fact that Carpenter Square Theatre opened its twenty-first season with Harold and Maude, the stage version of the 1970s cult classic film by the same name from 03-25 Sept. 2005.
The main thesis of such a popular comedy is depiction of two scenarios of human life. One is an introvert, Harold, twenty year old, who has evolved as a dramatic recluse as a result of receiving consistent neglect from his mother. Secondly, it is Maude, a septuagenarian who is an extrovert and freely living woman having no hassles. Both are representing two extremes. The movie's real concern is that "there is a time to live and time to die" (Canby, 1971). All that occurs is on the road to life and
As such, Harold (Bud Cort) loves feigning suicide attempts. He does them in front of his mother, Mrs. Chasen (Vivian Pickles). She is then infuriated instead of being frightened by such repeated attempts. Harold pretends to drown, shoot, hang, slit his wrists, chop off his hand and immolate himself. Nothing of this sort affects his mother. Yes, his mother arranges computer dates for Harold which he promptly scares away. Harold enjoys driving a hearse and frequents funerals of people he doesn't know. He is also fond of spending time at junk yards.
Then there emerges his match in Maude (Ruth Gordon). ...
Then there emerges his match in Maude (Ruth Gordon). She is an expert at stealing cars and so many other things. She is still full of life. Her friendship with Harold starts at a funeral where she is having a solo picnic of her own. Harold learns to love life, to embrace it and nurture it only from Maude.
There is so much of happening on the highway to life and death in this film that Harold - representing death, and Maude - depicting life, have numerous 'meditations' to share mutually. This ultimately brings them, first, to the altar of marriage and, then, separation in the suicide of Maude. This is the communion of Death in Life and Life in Death.
Author's last name
HYPOTHESES
1. There are varied streams of consciousness in this film. These diverse levels of consciousness show "cinematic representation of mental processes
occurring in the minds of fictional characters simultaneously with the external action, granting a penetration into their inner life" (Callev, 1997). This is reflected in Uncle Victor, Mrs. Chasen, Sunshine, Edith and other girls from Dating Service, Police Cops, Nurses and Priest etc. in the film Harold and Maude.
2. One of the most interesting aspect in this movie is its emphasis on 'self'. What 'this over-concern with self can bring about' is shown in diversity of character and their behavior. Different roles and dispositions are shown in the film. That is why it is also branded as a black comedy. For instance, Nurses do not listen to Harold when he is asking them to immediately treat Maude to save her life.
Another similar example is there in the acts of Harold presenting Maude with an 'I Love You' memento and, Maude, on the other hand, throwing it into ocean depths instantly!
3. All these characters and ...Download file to see next pagesRead More
Share:
Tags
Cite this document
(“Harold and Maude A Meditation on Life and Death Essay”, n.d.)
Retrieved de https://studentshare.org/miscellaneous/1533392-harold-and-maude-a-meditation-on-life-and-death

(Harold and Maude A Meditation on Life and Death Essay)
https://studentshare.org/miscellaneous/1533392-harold-and-maude-a-meditation-on-life-and-death.

“Harold and Maude A Meditation on Life and Death Essay”, n.d. https://studentshare.org/miscellaneous/1533392-harold-and-maude-a-meditation-on-life-and-death.
Comments (0)
Click to create a comment or rate a document

The evolution of sociology could be traced to the development...

Many felt that Dr. King was an “outsider” meddling in matters that did not concern him. Dr. King's accusers said that he was creating tension in society, going against the laws of the land, and not concerned with the matters of the church. Similarly, Socrates's accusers stated that he was promoting general corruption, corrupting amongst the youth, and his motives regarding following the law of the land are...
7 Pages(1750 words)Case Study
sponsored ads
Save Your Time for More Important Things
Let us write or edit the essay on your topic "Harold and Maude A Meditation on Life and Death" with a personal 20% discount.
GRAB THE BEST PAPER

Let us find you another Essay on topic Harold and Maude A Meditation on Life and Death for FREE!