Comments (0)
Add to wishlistDelete from wishlist
Cite this document
Summary
The concept of 'crisis' has entered international politics as a situation jenseits von Krieg und Frieden: 'where there is a crisis, there is no war and there is no peace' (Houben 12: 2005). It is in this ambiguous space that the practice of crisis management takes place…
Download full paperFile format: .doc, available for editing
HIDE THIS PAPERGRAB THE BEST PAPER91.9% of users find it useful 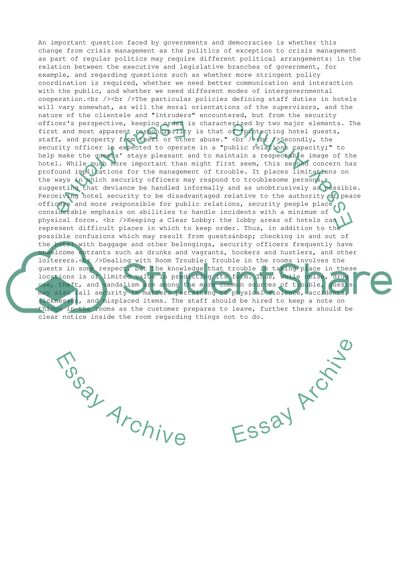 Download file to see previous pages An important question faced by governments and democracies is whether this change from crisis management as the politics of exception to crisis management as part of regular politics may require different political arrangements: in the relation between the executive and legislative branches of government, for example, and regarding questions such as whether more stringent policy coordination is required, whether we need better communication and interaction with the public, and whether we need different modes of intergovernmental cooperation.
The particular policies defining staff duties in hotels will vary somewhat, as will the moral orientations of the supervisors, and the nature of the clientele and "intruders" encountered, but from the security officer's perspective, keeping order is characterized by two major elements. The first and most apparent responsibility is that of "protecting hotel guests, staff, and property from theft or other abuse." Secondly, the security officer is expected to operate in a "public relations capacity;" to help make the guests' stays pleasant and to maintain a respectable image of the hotel. While much more important than might first seem, this second concern has profound implications for the management of trouble. It places limitations on the ways in which security officers may respond to troublesome persons, suggesting that deviance be handled informally and as unobtrusively as possible. Perceiving hotel security to be disadvantaged relative to the authority of peace officers and more responsible for public relations, security people (and their employers) place considerable emphasis on abilities to handle incidents with a minimum of physical force.
Keeping a Clear Lobby: the lobby areas of hotels can represent difficult places in which to keep order. Thus, in addition to the possible confusions which may result from guests (and their children) checking in and out of the hotel with baggage and other belongings, security officers frequently have unwelcome entrants such as drunks and vagrants, hookers and hustlers, and other loiterers
Dealing with Room Trouble: Trouble in the rooms involves the guests in some respect, but the knowledge that trouble is taking place in these locations is of limited value in predicting its form. Thus, while noise, drug use, theft, and vandalism are among the more common sources of trouble, guests may also call security in matters pertaining to physical violence, accidents, sicknesses, and misplaced items. The staff should be hired to keep a note on things in the rooms as the customer prepares to leave, further there should be clear notice inside the room regarding things not to do.
Hijacking
The pilot is the prime player in the hijack situation because he controls the aircraft and the crew. The first concern the pilot has, after ensuring the safety of his passengers, crew, and aircraft, is to advise the ground authorities that he has been hijacked. ...Download file to see next pagesRead More
Share:
Tags
Cite this document
(“Crisis Management Paper Essay Example | Topics and Well Written Essays - 1750 words”, n.d.)
Crisis Management Paper Essay Example | Topics and Well Written Essays - 1750 words. Retrieved from https://studentshare.org/miscellaneous/1533362-crisis-management-paper

Civil Aviation Administration of China (CAAC) – undoubtedly advanc...
7 Pages(1750 words)Assignment
sponsored ads
Save Your Time for More Important Things
Let us write or edit the essay on your topic "Crisis Management Paper" with a personal 20% discount.
GRAB THE BEST PAPER

Let us find you another Essay on topic Crisis Management Paper for FREE!