Assess the impact of Export Processing Zones (EPZs) on consumers and employees in developing countries. Answers should draw on examples and theories of international trade taught on this module - Essay Example

Comments (0)
Add to wishlistDelete from wishlist
Cite this document
Summary
Export processing zone (EPZ) can be defined as "type of free trade zone (FTZ), generally in developing countries by their governments to promote industrial and commercial exports" (BusinessDictionary.com, 2009). In order to support its growth, EPZ's enjoy privilege benefits from the government with regard to fiscal incentives, tax rebates, and other exclusive benefits (mapsofindia.com).
…
Download full paperFile format: .doc, available for editing
HIDE THIS PAPERGRAB THE BEST PAPER96.1% of users find it useful 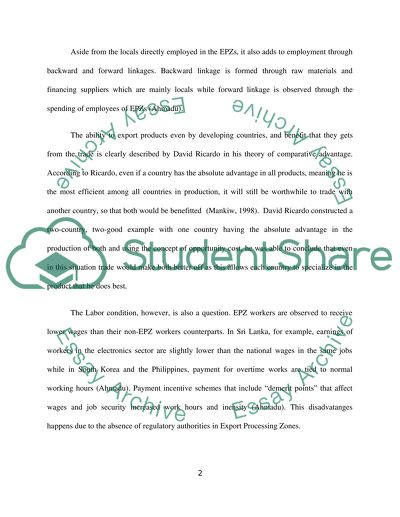 Extract of sample "Assess the impact of Export Processing Zones (EPZs) on consumers and employees in developing countries. Answers should draw on examples and theories of international trade taught on this module"

Download file to see previous pages Export Processing Zones holds pregnant promises to developing countries, with the hope of enlivened economy through foreign direct investors. It is just fitting therefore to study how they have affected developing societies through the eyes of the consumers and the laborers.
EPZs are also designed to generate jobs for locals. With the presence of foreign investors and with the usually cheap labor in developing countries, Export Processing Zones promise job opportunities and improvement.
Aside from the locals directly employed in the EPZs, it also adds to employment through backward and forward linkages. Backward linkage is formed through raw materials and financing suppliers which are mainly locals while forward linkage is observed through the spending of employees of EPZs (Ahmadu).
The ability to export products even by developing countries, and benefit that they gets from the trade is clearly described by David Ricardo in his theory of comparative advantage. According to Ricardo, even if a country has the absolute advantage in all products, meaning he is the most efficient among all countries in production, it will still be worthwhile to trade with another country, so that both would be benefitted (Mankiw, 1998). David Ricardo constructed a two-country, two-good example with one country having the absolute advantage in the production of both and using the concept of opportunity cost, he was able to conclude that even in this situation trade would make both better off as this allows each country to specialize in the product that he does best.
The Labor condition, however, is also a question. EPZ workers are observed to receive lower wages than their non-EPZ workers counterparts. In Sri Lanka, for example, earnings of workers in the electronics sector are slightly lower than the national wages in the same jobs while in South Korea and the Philippines, payment for overtime works are tied to normal working hours (Ahmadu). Payment incentive schemes that include "demerit points" that affect wages and job security increased work hours and inensity (Ahmadu). This disadvatanges happens due to the absence of regulatory authorities in Export Processing Zones.
Due to this adverse work condition, unionisation is prevalent among EPZs, although union activities are limited in some countries. In the Philippines, for example, strike are unathorized, based on the recognition that EPZs are very crucial to the country's economic success.
On Employment: The Philippine Case
The Philippines has four Export Processing Zones, found in the provinces of Bataan, Cebu, Benguet and Cavite. Among these are 16 government-administered regional industrial centres and 36 private-owned businesses. The EPZs has been strongly supported by the past administrations beginning from President Marcos up to the Arroyo Administration.
A study of the Center for Applied Research and Library Services in the country, however, has revealed that EPZ has been discriminatory against women in terms of employment with women required to be single and college educated while men are not and that jobs that require higher skills are usually given to men ...Download file to see next pagesRead More
Share:
Tags
Cite this document
(“Assess the impact of Export Processing Zones (EPZs) on consumers and Essay”, n.d.)
Assess the impact of Export Processing Zones (EPZs) on consumers and Essay. Retrieved from https://studentshare.org/miscellaneous/1533358-assess-the-impact-of-export-processing-zones-epzs-on-consumers-and-employees-in-developing-countries-answers-should-draw-on-examples-and-theories-of-international-trade-taught-on-this-module

“Assess the Impact of Export Processing Zones (EPZs) on Consumers and Essay”, n.d. https://studentshare.org/miscellaneous/1533358-assess-the-impact-of-export-processing-zones-epzs-on-consumers-and-employees-in-developing-countries-answers-should-draw-on-examples-and-theories-of-international-trade-taught-on-this-module.
Comments (0)
Click to create a comment or rate a document

CHECK THESE SAMPLES OF Assess the impact of Export Processing Zones (EPZs) on consumers and employees in developing countries. Answers should draw on examples and theories of international trade taught on this module

... objections which said although he considered the soul as a better part of human being, there is no proof that the better part i.e. the soul will continue to last even after the worse part i.e. the body ceases to remain. He has compared the body with the weaver’s cloak and the soul with weaver (Rouse, 1956). In response to these objections, Socrates came up with the answer stating that soul is the cause of life and this is the reason why it is immortal. Socrates says, ‘if there be anything beautiful other than absolute beauty it is beautiful only insofar as it partakes of absolute beauty’. Hence like ‘absolute beauty’, soul is also a form which can never act like something that is opposite to it. He has also put forth an example stating...
6 Pages(1500 words)Assignment

Given the emergent nature of online commerce, it is a tough task for retailers to develop a website that meets all expectations from consumers. This view is supported by a survey conducted by the UK’s largest e-consultancy Cap Gemini. The survey identified several key disadvantages for online shoppers. Some of these include “’ Availability’, ‘Can’t be in to receive delivery’, ‘Premium charged for delivery’, ‘Can’t see or feel the merchandise’, etc.” (Quader & Quader, 2008) These are not trivial complaints by any means and despite the e-retailing industry setting foot into its third decade in existence, there are no satisfactory solutions found for th...
6 Pages(1500 words)Literature review
sponsored ads
Save Your Time for More Important Things
Let us write or edit the essay on your topic "Assess the impact of Export Processing Zones (EPZs) on consumers and employees in developing countries. Answers should draw on examples and theories of international trade taught on this module" with a personal 20% discount.
GRAB THE BEST PAPER

Let us find you another Essay on topic Assess the impact of Export Processing Zones (EPZs) on consumers and employees in developing countries. Answers should draw on examples and theories of international trade taught on this module for FREE!