Issues and their implications for AVE Practitioners - Essay Example

Comments (0)
Add to wishlistDelete from wishlist
Cite this document
Summary
There is a saying that life is an on-going process of learning and development. That is to say, individuals are supposed to learn. They are expected to be educated as they go on with their work and personal matters. My personal opinion holds these ideas as somewhat lacking of proof and substance…
Download full paperFile format: .doc, available for editing
HIDE THIS PAPERGRAB THE BEST PAPER94.9% of users find it useful 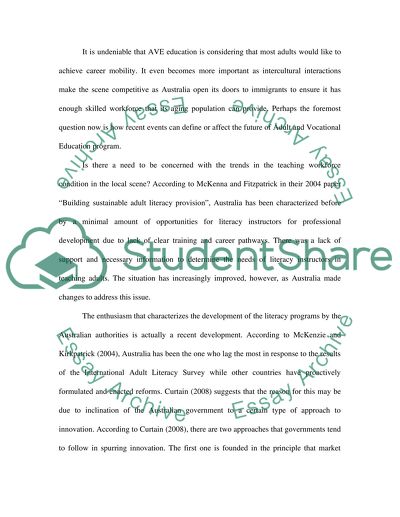 Extract of sample "Issues and their implications for AVE Practitioners"

Download file to see previous pages The rather unexpected revelation indicates that there is indeed an insufficiency for the provision of decent adult and vocational education. To try to solve the issue, many countries responded by installing frameworks that will cater and monitor the ongoing education of adults that is suited to fill to the emerging needs of a rapidly diversifying global market. Policies concerning adult and vocational education are being made and they are hoped to address this issue. There is much fanfare generated by the survey and is leading to many changes or introduction of innovative ideas for AVE.
In my chosen field of AVE education, the issue now is that how is my career be affected in light of the developments in social and economic scenes. To be sure, my field can surely be affected and it is in this matter that I try to examine in this paper.
It is undeniable that AVE education is considering that most adults would like to achieve career mobility. It even becomes more important as intercultural interactions make the scene competitive as Australia open its doors to immigrants to ensure it has enough skilled workforce that its aging population can provide. Perhaps the foremost question now is how recent events can define or affect the future of Adult and Vocational Education program.
Is there a need to be concerned with the trends in the teaching workforce condition in the local scene According to McKenna and Fitzpatrick in their 2004 paper "Building sustainable adult literacy provision", Australia has been characterized before by a minimal amount of opportunities for literacy instructors for professional development due to lack of clear training and career pathways. There was a lack of support and necessary information to determine the needs of literacy instructors in teaching adults. The situation has increasingly improved, however, as Australia made changes to address this issue.
The enthusiasm that characterizes the development of the literacy programs by the Australian authorities is actually a recent development. According to McKenzie and Kirkpatrick (2004), Australia has been the one who lag the most in response to the results of the International Adult Literacy Survey while other countries have proactively formulated and enacted reforms. Curtain (2008) suggests that the reason for this may be due to inclination of the Australian government to a certain type of approach to innovation. According to Curtain (2008), there are two approaches that governments tend to follow in spurring innovation. The first one is founded in the principle that market competition and forces could generate innovative ideas on their own. On the other end of the spectrum is the approach that operates in the principle that enterprise rarely innovates alone and the government should proactively formulate a national innovation system. In this approach, a network is established between skilled personnel, government research and enterprises. Curtain, in his paper, argues that Australia tends to use the first approach. While other countries such as Finland and Singapore have developed from a humbling beginning, Australia had been left behind.
Having this in mind, Australian authorities have stepped up efforts to improve literacy rates. Efforts to provide a federally recognized ...Download file to see next pagesRead More
Share:
Tags
Cite this document
(“Issues and their implications for AVE Practitioners Essay”, n.d.)
Issues and their implications for AVE Practitioners Essay. Retrieved from https://studentshare.org/miscellaneous/1533302-issues-and-their-implications-for-ave-practitioners

“Issues and Their Implications for AVE Practitioners Essay”, n.d. https://studentshare.org/miscellaneous/1533302-issues-and-their-implications-for-ave-practitioners.
Comments (0)
Click to create a comment or rate a document

CHECK THESE SAMPLES OF Issues and their implications for AVE Practitioners

In spite of their discouraging entrance in the steel industry, Nucor Corporation has become a benchmark for both the U.S. steel industry and the U.S. industry in general. It is one of the fastest-growing and most resourceful steel producers around the globe. Regardless of the decreasing demand for steel, Nucor’s expansion has been exceptional; the company is among the top producers of steel in the U.S. Without a Research and Development department, Nucor has constantly accomplished techno...
7 Pages(1750 words)Case Study
sponsored ads
Save Your Time for More Important Things
Let us write or edit the essay on your topic "Issues and their implications for AVE Practitioners" with a personal 20% discount.
GRAB THE BEST PAPER

Let us find you another Essay on topic Issues and their implications for AVE Practitioners for FREE!