Comments (0)
Add to wishlistDelete from wishlist
Cite this document
Summary
The concept of corporate capital structure and cost of capital occupy an important position in modern corporate finance. Considerable controversy has surrounded the question of whether using debt to create financial leverage can affect the average cost of capital and the total value of the firm…
Download full paperFile format: .doc, available for editing
HIDE THIS PAPERGRAB THE BEST PAPER94% of users find it useful 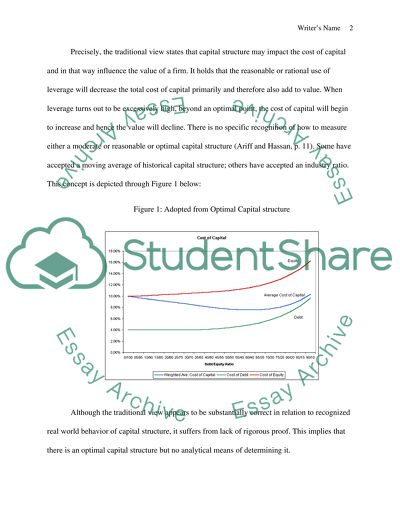 Download file to see previous pages It had been generally assumed that there is an optimal mixture of debt and equity in a firm's capital structure that results in a shallow, U-shaped average cost-of-capital curve. That is to say, the market value of the firm will rise to a point with an increase in the debt ratio. Beyond that point, any increase in the debt ratio will cause the market value of the firm to decline. (Ariff and Lau, p. 391-410)
Precisely, the traditional view states that capital structure may impact the cost of capital and in that way influence the value of a firm. It holds that the reasonable or rational use of leverage will decrease the total cost of capital primarily and therefore also add to value. When leverage turns out to be excessively high, beyond an optimal point, the cost of capital will begin to increase and hence the value will decline. There is no specific recognition of how to measure either a moderate or reasonable or optimal capital structure (Ariff and Hassan, p. 11). Some have accepted a moving average of historical capital structure; others have accepted an industry ratio. This concept is depicted through Figure 1 below:
Although the traditional view appears to be substantially correct in relation to recognized real world behavior of capital structure, it suffers from lack of rigorous proof. ...
b) The Independence Hypothesis: Modigliani and Miller (1958)
Modigliani and miller 1were the first to develop a modern theory of capital structure supported by rigorous mathematical proof. The M&M (1958) theory is based on several simplifying assumptions:
i. Perfect and frictionless capital markets with investors that behave rationally;
ii. Individuals can borrow and lend at the same interest rate regardless the amounts;
iii. No corporate or personal income taxes'
iv. The firm's cost of equity depends upon its business risk class;
v. Firms issue only risk-free debt and risk equity, and thus there are no bankruptcy costs;
vi. Operating earnings of the firm are not expected to grow.
The original M&M theory holds that the average cost of capital is independent of the firm's capital structure and equal to the capitalization rate of an unlevered stream of earnings at the capitalization rate appropriate to its risk class. As a result, the total market value of the firm is independent of its capital structure.
Figure 2: Adopted from figure 5 Maugham, 2000, p.1
The original M&M result was obtained assuming perfect capital markets. Subsequent literature has relaxed the underlying assumptions of M&M's 1958 model. Stiglitz (1969) proved, using a state preference framework that the M&M result (1958) holds with risky debt, so long as there are no bankruptcy costs. Hamada (1969), using the CAMP, showed that the M&M result (1958) holds in a world where assets are allowed to have different risk classes. Mossin (1969), using a modified version of Sharpe's single-period asset valuation model, showed that in tax less, frictionless markets where there is no possibility that the firm will go bankrupt, changes in its debt-equity ratio will not alter the total market value of ...Download file to see next pagesRead More
Share:
Tags
Cite this document
(“CORPORATE FINANCE Essay Example | Topics and Well Written Essays - 1500 words”, n.d.)
CORPORATE FINANCE Essay Example | Topics and Well Written Essays - 1500 words. Retrieved from https://studentshare.org/miscellaneous/1533281-corporate-finance

CHECK THESE SAMPLES OF CORPORATE FINANCE

Corporate governance is about ethical conduct in business. Ethics is concerned with the code of valu...

Critics of the excessive packages are of the opinion that such high packages reflect ‘pay for failure’ and do not take in to account the financial performance of the company (Solomon, 2007 p. 40). Additionally, most of the directors are geared at self-interests, thus undermining the ability of the shareholders to receive a fair return for their investments (Barty and Jones, 2012 p.14).
According to a recent report by the High Pay Commission, there has been a drastic growth in directors’ packages over the last thirty years. According to the report, directors’ packages have risen by about 5,000 percent in the last thirty years while the average income worker has increased by only 300 percent. The report...
6 Pages(1500 words)Coursework
sponsored ads
Save Your Time for More Important Things
Let us write or edit the essay on your topic "CORPORATE FINANCE" with a personal 20% discount.
GRAB THE BEST PAPER

Let us find you another Essay on topic CORPORATE FINANCE for FREE!