Comments (0)
Add to wishlistDelete from wishlist
Cite this document
Summary
World over, companies are striving hard to attract and retain their employees. Headhunting is a rampant phenomenon and sometimes companies find themselves struggling to appease and retain their demanding workforce. The workforce is the most important asset of any company…
Download full paperFile format: .doc, available for editing
HIDE THIS PAPERGRAB THE BEST PAPER93.1% of users find it useful 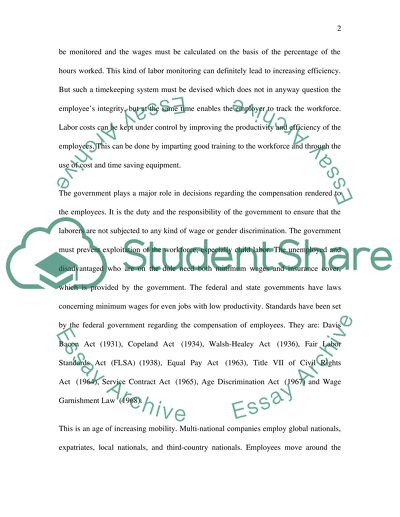 Download file to see previous pages The company has to satisfy both the customer and the laborer in order to run a profit oriented business in a highly competitive world. Laws and legislations governing the workforce have evolved over the passing decades. Labor issues have always been sources of conflict and they are highly problematic. The employer has to study and develop techniques to control labor costs; he must create solutions which can be implemented and enforced in his company, with a view to garner maximum profits.
One of the major reasons for spiraling labor costs is the unauthorized and unscheduled absenteeism of the workforce. The attendance and the time spent by the workforce must be monitored and the wages must be calculated on the basis of the percentage of the hours worked. This kind of labor monitoring can definitely lead to increasing efficiency. But such a timekeeping system must be devised which does not in anyway question the employee's integrity, but at the same time enables the employer to track the workforce. Labor costs can be kept under control by improving the productivity and efficiency of the employees. This can be done by imparting good training to the workforce and through the use of cost and time saving equipment.
The government plays a major role in decisions regarding the compensation rendered to the employees. It is the duty and the responsibility of the government to ensure that the laborers are not subjected to any kind of wage or gender discrimination. The government must prevent exploitation of the workforce, especially child labor. The unemployed and disadvantaged who are on the dole need both minimum wages and insurance cover, which is provided by the government. The federal and state governments have laws concerning minimum wages for even jobs with low productivity. Standards have been set by the federal government regarding the compensation of employees. They are: Davis Bacon Act (1931), Copeland Act (1934), Walsh-Healey Act (1936), Fair Labor Standards Act (FLSA)(1938), Equal Pay Act (1963), Title VII of Civil Rights Act(1964), Service Contract Act (1965), Age Discrimination Act (1967) and Wage Garnishment Law (1968).
This is an age of increasing mobility. Multi-national companies employ global nationals, expatriates, local nationals, and third-country nationals. Employees move around the world; therefore it is a highly complicated task to devise compensation packages for employees working in disparate situations.
There are different types of employees in multi-national corporation - third country nationals, expatriates and local nationals. Third country nationals are those who belong to another culture or nation having similarities with their place of work. Expatriates are those living outside their country of citizenship. Local nationals are those who are employed in the nation of their origin.
Employers, by and large, have adopted different paths toward controlling labor costs. Most of the employers have discovered that investment in labor management can reap the reward of greater efficiency. This in turn, would give rise to happier employees. Efficient labor management techniques can control spiraling labor costs. Data collection for creating the payroll of employees and the automation of the payroll system reduces labor cost to a great extent.
A survey conducted by Clark Consulting in 2004 found that institutional investor limits and uncertainty about the future accounting treatment for stock-based compensation ...Download file to see next pagesRead More
Share:
Tags
Cite this document
(“Control labor costs Essay Example | Topics and Well Written Essays - 750 words”, n.d.)
Control labor costs Essay Example | Topics and Well Written Essays - 750 words. Retrieved from https://studentshare.org/miscellaneous/1532934-control-labor-costs

...?Control Costs Table of Contents Table of Contents 2 Overview 3 Impact of the Organizational Structure on the Luxury Division 5 Proposed Way to Control Cost 7 Reference 9 Bibliography 9 Overview Superior Living Inc is a domestic home furniture manufacturer in the United States. Their target customers are in the age group of 21 to 54. It has been found that the company earned $250 million revenues from all its product lines. Each of the product line is considered as a division with certain functional departments. Luxury is the largest division of this organization and it has been observed that in the last three years, cost has been escalating much quicker in comparison to the revenue. In this report, it will be discussed that how the cost...
3 Pages(750 words)Essay

Prior to the passage of the Taft-Hartley Act in 1947, unions and employers covered by the National Labor Relations Act could lawfully agree to a "closed shop", in which employees at unionized workplaces are required to be members of the union as a condition of employment (Wikipedia, 2006). The federal statute known as the National Labor Relations Act (NLRA) establishes the federal structure for dealing with unions in the private sector. Under this statute, the union which has been selected as the collective bargaining agent has the power to extract dues and fees from all members in the bargaining unit as long as the employer agrees to such a provision in the collective bargaining agreement. The ability to require the payment of du...
9 Pages(2250 words)Case Study

CVP graphs help the manager and the reader to have a better figure of the relationship between the profits, sales and volum...

The primary Human Rights document in the United Kingdom is the Human...
11 Pages(2750 words)Term Paper

On the other hand, pro-gun control activists are also pushing for a policy shift where guns can be controlled as a way of trying to reduce violent crimes committed by gun owners. Besides this state of affairs, I am of the view that guns should not be controlled since they play a pivotal role in our lives.
It can be noted that the places where individuals stay also determine their need to own guns or not. Reach Chuck argues that gun ownership depends on where one lives. Most people in rural America believe that guns are an integral part of their lives. For instance, “A compilation of December Gallup polls showed that rural Americans — roughly one-sixth of the population — are more than twice as likely to have...
6 Pages(1500 words)Essay
sponsored ads
Save Your Time for More Important Things
Let us write or edit the essay on your topic "Control labor costs" with a personal 20% discount.
GRAB THE BEST PAPER

Let us find you another Essay on topic Control labor costs for FREE!