Comments (0)
Add to wishlistDelete from wishlist
Cite this document
Summary
A child in this 21st century is born in an environment of digital electronics. The distance is no longer a factor and each one of us is connected through various mediums like cellphones and internet enabled computers. For the same child, it would be very much difficult to realize the fact that almost a century ago it was difficult to even transfer information to a place nearby…
Download full paperFile format: .doc, available for editing
HIDE THIS PAPERGRAB THE BEST PAPER92.9% of users find it useful 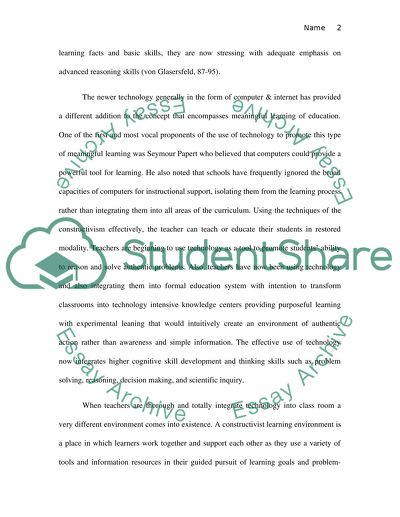 Download file to see previous pages The integration of technology has brought great improvisation in the quality of high school education. The ultimate gain of the above mentioned point has actually spread a sense of security in the students. They are now more confident of taking up the challenges of the real world that requires instant decision making and regular introspection. The learning in the classroom is now generating a new relationship between the teacher and the student. The teachers are now developing various new methods for assessment as well as teaching process. The schools are also entrusting its teachers to stress on critical thinking. Even though students are learning facts and basic skills, they are now stressing with adequate emphasis on advanced reasoning skills (von Glasersfeld, 87-95).
The newer technology generally in the form of computer & internet has provided a different addition to the concept that encompasses meaningful learning of education. One of the first and most vocal proponents of the use of technology to promote this type of meaningful learning was Seymour Papert who believed that computers could provide a powerful tool for learning. He also noted that schools have frequently ignored the broad capacities of computers for instructional support, isolating them from the learning process rather than integrating them into all areas of the curriculum. Using the techniques of the constructivism effectively, the teacher can teach or educate their students in restored modality. Teachers are beginning to use technology as a tool to promote students' ability to reason and solve authentic problems. Also, teachers have now been using technology and also integrating them into formal education system with intention to transform classrooms into technology intensive knowledge centers providing purposeful learning with experimental leaning that would intuitively create an environment of authentic action rather than awareness and simple information. The effective use of technology now integrates higher cognitive skill development and thinking skills such as problem solving, reasoning, decision making, and scientific inquiry.
When teachers are thorough and totally integrate technology into class room a very different environment comes into existence. A constructivist learning environment is a place in which learners work together and support each other as they use a variety of tools and information resources in their guided pursuit of learning goals and problem-solving activities. Constructivist learning environments frequently encompass many different applications of media and technology. Classrooms under this environment are active with the combine of the tools of constructivism with communication and visualization tools that enable communication and collaboration among learners in a socio cultural context. Increased student achievement can result because of the synergy created through dynamic interactions (Sandholtz, Ringstaff, & Dwyer).
Reference:
Papert, S. Mindstorms: Children, computers and powerful ideas. New
York: Harper Collins, 1980
Papert, S. The children's machine: Rethinking school in the age of the
computer. New York: Basic Books, 1994
Sandholtz, J., Ringstaff, C., & Dwyer, D. ...Download file to see next pagesRead More
Share:
Tags
Cite this document
(“Quality of High School Education in United States Essay”, n.d.)
Quality of High School Education in United States Essay. Retrieved from https://studentshare.org/miscellaneous/1532882-quality-of-high-school-education-in-united-states

Given the emergent nature of online commerce, it is a tough task for retailers to develop a website that meets all expectations from consumers. This view is supported by a survey conducted by the UK’s largest e-consultancy Cap Gemini. The survey identified several key disadvantages for online shoppers. Some of these include “’ Availability’, ‘Can’t be in to receive delivery’, ‘Premium charged for delivery’, ‘Can’t see or feel the merchandise’, etc.” (Quader & Quader, 2008) These are not trivial complaints by any means and despite the e-retailing industry setting foot into its third decade in existence, there are no satisfactory solutions found for th...
6 Pages(1500 words)Literature review
sponsored ads
Save Your Time for More Important Things
Let us write or edit the essay on your topic "Quality of High School Education in United States" with a personal 20% discount.
GRAB THE BEST PAPER

Let us find you another Essay on topic Quality of High School Education in United States for FREE!