Comments (0)
Add to wishlistDelete from wishlist
Cite this document
Summary
Communication can be defined as the exchange of information from one person to the other through a medium. Therefore it is a process in which message is sent from the sender to the receiver which is mediated by a medium. The communication process involves three steps…
Download full paperFile format: .doc, available for editing
HIDE THIS PAPERGRAB THE BEST PAPER96.3% of users find it useful 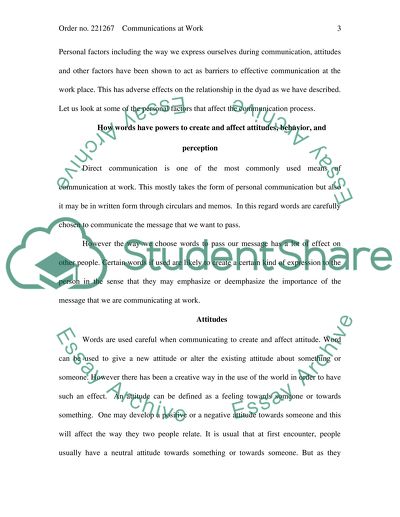 Extract of sample "Communications at Work"

Download file to see previous pages Communication at work is one of the most important factors that determine how we perform our duties. Communication at work is takes the form of a dyad communication as we communicate with our managers vertically and we also communicate with our fellow workers horizontally. Effective communication is very important for efficient functioning of the dyad. However it has been shown that there are many factors that can affect the way we communicate with one another in the work place. Failure of communication at work can be a barrier to creating of an effective working environment as since it becomes difficult to understand each others.
There are many barriers to effective communication in the workplace. This can result from environmental factors in the work place and at the same time it can be due to personal factors. However it has been shown that personal factors are the leading cause of barrier to communication in the work place as compared to environmental factors. Personal factors including the way we express ourselves during communication, attitudes and other factors have been shown to act as barriers to effective communication at the work place. This has adverse effects on the relationship in the dyad as we have described. Let us look at some of the personal factors that affect the communication process.
Direct communication is one of the most commonly used means of communication at work...
In this regard words are carefully chosen to communicate the message that we want to pass.
However the way we choose words to pass our message has a lot of effect on other people. Certain words if used are likely to create a certain kind of expression to the person in the sense that they may emphasize or deemphasize the importance of the message that we are communicating at work.
Attitudes
Words are used careful when communicating to create and affect attitude. Word can be used to give a new attitude or alter the existing attitude about something or someone. However there has been a creative way in the use of the world in order to have such an effect. An attitude can be defined as a feeling towards someone or towards something. One may develop a positive or a negative attitude towards someone and this will affect the way they two people relate. It is usual that at first encounter, people usually have a neutral attitude towards something or towards someone. But as they interact with time, they tend to develop a positive or a negative attitude toward. This is usually affected by the judgment that people make from such an interaction. (Baby Center UK, 2008)
As we communicate in the work place, we tend to form different kinds of attitudes. We may have a neutral attitude towards each other when we meet but as we interact we tend to change attitudes. In our communication process words play an important role as they alter the perception we had about someone or about something that we have related with in the work place.
The way we choose our words to communicate with others also affects their attitude about us. In the dyad there are expectations that the supervisors or the managers may be expected to use authoritative ...Download file to see next pagesRead More
Share:
Tags
Cite this document
(“Communications at Work Essay Example | Topics and Well Written Essays - 2000 words”, n.d.)
Communications at Work Essay Example | Topics and Well Written Essays - 2000 words. Retrieved from https://studentshare.org/miscellaneous/1530729-communications-at-work

CHECK THESE SAMPLES OF Communications at Work

We need to make sure that we are doing the right things, in the right way, at the right time for the right people in an open, honest, and accountable manner (Ref).
The benefits of the partnership working have been the focus of many public, private, voluntary, and community organizations. The Council has in the past, played a leading role in establishing and developing partnerships. A range of issues has been identified to address and to ensure that the Council has a consistent and rigorous approach to partnership working so that we are able to obtain full benefits. Clear processes and procedures are necessary to enable us to deliver the services to our service users efficiently, effectively, and properly with our p...
10 Pages(2500 words)Essay

...Political communication: Today, voters no longer make decisions based only on personal opinion but view most issues through the eyes and ears of the media. Most options arise from interpretation of the symbols obtained from mass media. Political advertising is a prominent media for reaching voters. Political advertisements aim at increasing issue knowledge, influencing perceptions of the candidate’s character, altering attitudes and affecting candidate preference. In most political advertisements, politicians essentially promote themselves, their thoughts, beliefs, values, image and political propaganda. These advertisements can have a rather persuasive influence on voters. Political ads can convey both positive and negative feelings...
6 Pages(1500 words)Essay
sponsored ads
Save Your Time for More Important Things
Let us write or edit the essay on your topic "Communications at Work" with a personal 20% discount.
GRAB THE BEST PAPER

Let us find you another Essay on topic Communications at Work for FREE!