Comments (0)
Add to wishlistDelete from wishlist
Cite this document
Summary
According to Communities and Local Government (2010, pg. 1), "Social landlords have a key role to play, working in partnership with the police, local authorities and other local agencies, in preventing and tackling anti-social behaviour (ASB) in the communities where they own and manage homes…
Download full paperFile format: .doc, available for editing
HIDE THIS PAPERGRAB THE BEST PAPER97.4% of users find it useful 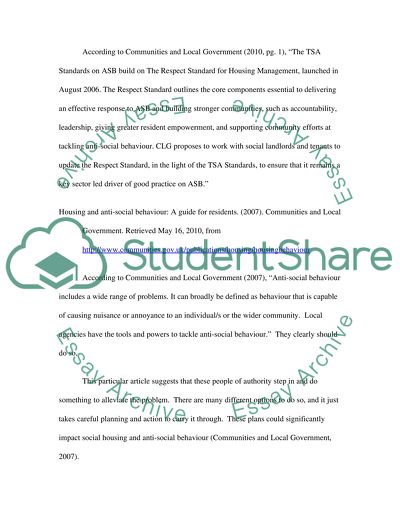 Download file to see previous pages There are certain standards that social housing landlords must comply with according to the government and authorities. These are set forth by the Tenant Services Authority, or TSA. They are responsible for the regulation of the performance of landlords and preventing and stopping anti-social behaviour in their housing systems (Communities and Local Government (2010).
According to Communities and Local Government (2010, pg. 1), "The TSA Standards on ASB build on The Respect Standard for Housing Management, launched in August 2006. The Respect Standard outlines the core components essential to delivering an effective response to ASB and building stronger communities, such as accountability, leadership, giving greater resident empowerment, and supporting community efforts at tackling anti-social behaviour. CLG proposes to work with social landlords and tenants to update the Respect Standard, in the light of the TSA Standards, to ensure that it remains a key sector led driver of good practice on ASB."
According to Communities and Local Government (2007), "Anti-social behaviour includes a wide range of problems. It can broadly be defined as behaviour that is capable of causing nuisance or annoyance to an individual/s or the wider community. Local agencies have the tools and powers to tackle anti-social behaviour." They clearly should do so.
This particular article suggests that these people of authority step in and do something to alleviate the problem. There are many different options to do so, and it just takes careful planning and action to carry it through. These plans could significantly impact social housing and anti-social behaviour (Communities and Local Government, 2007).
Wilson, W. (2010). Anti-Social Behaviour in Social Housing. Library House of Commons. Retrieved May 16, 2010, from http://www.parliament.uk/documents/commons/lib/research/briefings/snsp-00264.pdf
Social landlords are housing authorities that are trained to be registered social landlords. When it comes to tenants who exhibit anti-social behaviour, these registered social landlords have a lot of power that they can exercise. The 1996 Housing Act, the 2003 Anti-Social Behaviour Act, and the 2004 Housing Act help led to this increase in power and authority (Wilson, 2010).
Also according to Wilson (2010), "The Government has published a leaflet (February 2010) which explains where to go for help to tackle anti-social behaviour and how to help solve anti-social behaviour problems in neighbourhoods: Tackling Anti-social Behaviour. Alongside the launch of this leaflet, John Denham announced the opening up of a programme of Government training to anyone suffering from anti-social behaviour in their neighbourhood. In October 2009 the Home Secretary announced another tranche of measures to control anti-social behaviour. These included an increased emphasis on prosecuting for ...Download file to see next pagesRead More
Share:
Tags
Cite this document
(“Anti-Social Behavior in Social Housing Essay Example | Topics and Well Written Essays - 2000 words”, n.d.)
Anti-Social Behavior in Social Housing Essay Example | Topics and Well Written Essays - 2000 words. Retrieved from https://studentshare.org/miscellaneous/1530522-anti-social-behavior-in-social-housing

CHECK THESE SAMPLES OF Anti-Social Behavior in Social Housing

Soon a retail industry was built up and the community began to grow and is considered to be a society with a civic nature (Learning Communities in Education and Training, 2009). The community of Broken Hill can be considered to be highly diverse with a census that was conducted in the area in 1996 showed that out of the then population there were 961 people who came from overseas and a large amount of those was not from an English speaking nation. The large composition of the population in the community at the time was aboriginals or Torres Strait Islanders. Broken Hill thus shows a varying ethnic community and a diverse mindset considering a large proportion of the people are from nations such as Greece, Malta and even Italy (Lea...
6 Pages(1500 words)Case Study
sponsored ads
Save Your Time for More Important Things
Let us write or edit the essay on your topic "Anti-Social Behavior in Social Housing" with a personal 20% discount.
GRAB THE BEST PAPER

Let us find you another Essay on topic Anti-Social Behavior in Social Housing for FREE!