Comments (0)
Add to wishlistDelete from wishlist
Cite this document
Summary
In Tirra Lirra by the River, expatriate Australian Nora Roche Porteous comes back to suburban Brisbane to live out her days in her family home after forty-five years away. She arrives with pneumonia, and alternating between the present and the past, she ends up reconstructing and restoring her sense of self…
Download full paperFile format: .doc, available for editing
HIDE THIS PAPERGRAB THE BEST PAPER96.6% of users find it useful 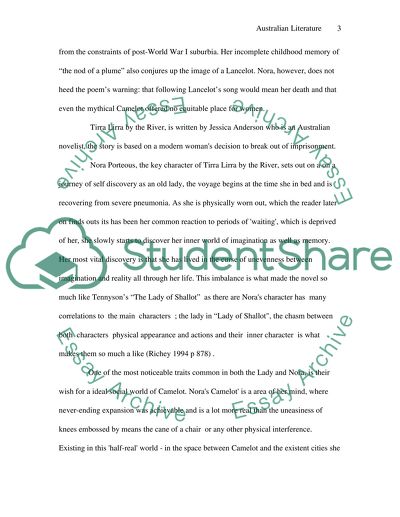 Download file to see previous pages So through the representation the main characters in both texts, the fact that Jessica Anderson's "Tirra Lirra by the River" was inspired by Tennyson's poem "The Lady of Shallot"
The theme of Tirra Lirra by the River, the woman artist's search for self within the constraints of the traditional female role, is connected to Jessica Anderson's use of imagery from Tennyson's poem "The Lady of Shallot." Tennyson's main character is a weaver, as Nora is an embroiderer. Nora is as much an outsider in her hometown on the Brisbane River as the Lady in her island tower. Nora, too, sees the world through the reflection in a mirror, the mirror of books, and yearns for Camelot, some larger life away from the constraints of post-World War I suburbia. Her incomplete childhood memory of "the nod of a plume" also conjures up the image of a Lancelot. Nora, however, does not heed the poem's warning: that following Lancelot's song would mean her death and that even the mythical Camelot offered no equitable place for women.
Nora Porteous, the key character of Tirra Lirra by the River, sets out on a on a journey of self discovery as an old lady, the voyage begins at the time she in bed and is recovering from severe pneumonia. As she is physically worn out, which the reader later on finds outs its has been her common reaction to periods of 'waiting', which is deprived of her, she slowly starts to discover her inner world of imagination as well as memory. Her most vital discovery is that she has lived in the curse of unevenness between imagination and reality all through her life. This imbalance is what made the novel so much like Tennyson's "The Lady of Shallot" as there are Nora's character has many correlations to the main characters ; the lady in "Lady of Shallot", the chasm between both characters physical appearance and actions and their inner character is what makes them so much a like (Richey 1994 p 878) .
One of the most noticeable traits common in both the Lady and Nora, is their wish for a ideal social world of Camelot. Nora's Camelot' is a area of her mind, where never-ending expansion was achievable and is a lot more real than the uneasiness of knees embossed by means the cane of a chair or any other physical interference. Existing in this 'half-real' world - in the space between Camelot and the existent cities she inhabits - has not turned Nora's life into a happy one. She is en trapped in a world which is full of shadows' and 'reflections', exactly like world which the lady lived in Tennyson's "The Lady of Shallot. Reality has in no way lived up to both of their expectation, as well as the very fact that Nora does not even think of expecting something exceptional from life draws only one question echoed in her head 'Who does she think she is'" (Anderson 1978 p. 13)
It is only while recovering in her own bed that Nora starts to separate her real self from her imagined self. her strong ability enable her to end the conflict between her dream ...Download file to see next pagesRead More
Share:
Tags
Cite this document
(“Australian Literature Bachelor Book Report/Review”, n.d.)
Australian Literature Bachelor Book Report/Review. Retrieved from https://studentshare.org/miscellaneous/1530242-australian-literature-bachelor-book-reportreview

UAE Security and the Effect of Technology and Car Bombs

... mission and vision of the company. Beyond this, it also needs to review how its strategy formulation and strategy implementation had gotten separated in the last few years (Grant 2005, p. 187). Even with todays remaining six divisions (infrastructure, industrials, commercial finance, GE Money, health care and NBC-Universal), it still needs to trim down. In other words, G.E. needs to reformulate its strategy and decide once and for all that it is no longer viable to be a conglomerate. The days of empire are over and it is best to start selecting the core areas in which it can compete effectively by disposing of non-core assets and businesses. It is only now that G.E. has finally tried to go past the shadow of Jack Welch whose influence...
12 Pages(3000 words)Report
sponsored ads
Save Your Time for More Important Things
Let us write or edit the book report/review on your topic "Australian Literature Bachelor Book Report/Review" with a personal 20% discount.
GRAB THE BEST PAPER