Comments (0)
Add to wishlistDelete from wishlist
Cite this document
Summary
In light of my life's journey and constant search for knowledge, I have come up with a personal multi-faceted point on what the good life is. I tackled this profound concept in terms of one's emotional state, ability to hone capabilities, relationship with others and introspection about the truth…
Download full paperFile format: .doc, available for editing
HIDE THIS PAPERGRAB THE BEST PAPER91.5% of users find it useful 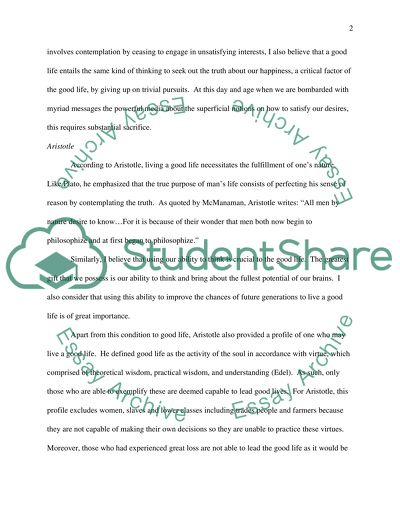 Extract of sample "The Good Life"

Download file to see previous pages As asserted by Plato in The Republic, the good life is basically defined in terms of the moral life. Although there is more to good life that morality, Plato believed morality is a vital component of living the good life. In this regard, the conflict between the good life and moral life becomes logically impossible in view of their internal relationship. (Nagel)
In searching for the good life, one must strive to have a moral life. This endeavor leads us to break away from the senseless and ungratifying pursuit of physical pleasures, honors and material benefits that commonly take precedence over one's search for the moral life (Kraut). It is in this manner that my view is similar to Plato's. As Plato proposed that living a good life involves contemplation by ceasing to engage in unsatisfying interests, I also believe that a good life entails the same kind of thinking to seek out the truth about our happiness, a critical factor of the good life, by giving up on trivial pursuits. At this day and age when we are bombarded with myriad messages the powerful media about the superficial notions on how to satisfy our desires, this requires substantial sacrifice.
According to Aristotle, living a good life necessitates the fulfillment of one's nature. ...
Similarly, I believe that using our ability to think is crucial to the good life. The greatest gift that we possess is our ability to think and bring about the fullest potential of our brains. I also consider that using this ability to improve the chances of future generations to live a good life is of great importance.
Apart from this condition to good life, Aristotle also provided a profile of one who may live a good life. He defined good life as the activity of the soul in accordance with virtue, which comprised of theoretical wisdom, practical wisdom, and understanding (Edel). As such, only those who are able to exemplify these are deemed capable to lead good lives. For Aristotle, this profile excludes women, slaves and lower classes including trades people and farmers because they are not capable of making their own decisions so they are unable to practice these virtues. Moreover, those who had experienced great loss are not able to lead the good life as it would be difficult to build new friendships, a necessary requirement to have a good life. The chronically ill would also find it difficult to have a good life for it is difficult for them to learn the desires of a healthy person since health is a requirement for leading the good life. (Haslip)
In this point, my view on good life contradicts Aristotle's idea. This is because for me, good life is attainable regardless of age, race, gender, social standing, mental and emotional conditions. I believe that anyone who has the ability to hold one's intrapersonal factors separate from external and other environmental factors may achieve happiness, thus, live a good life. For instance, a sick person, although he/she is not of sound health, can still be happy ...Download file to see next pagesRead More
Share:
Tags
Cite this document
(“The Good Life Essay Example | Topics and Well Written Essays - 1500 words”, n.d.)
Retrieved from https://studentshare.org/miscellaneous/1530227-the-good-life

CHECK THESE SAMPLES OF The Good Life

Since the year 2000, globalization has led many large business organizations to implement a long list of necessary changes in order to keep their business competitive within the global market. These changes may be influenced by both internal and external factors. (Burke, 2002)  Internal factors could be the introduction of a newly appointed general manager that came from a different company and cultural background or a change in organizational policy.  On the other hand, external factors may include new customers’ preferences in terms of products and services, a new direction with regards to where the market is heading, constantly changing the educational level of the potential manpower or the technological changes...
12 Pages(3000 words)Research Paper

OConnors Fiction and Debates on Good and Evil

This paper shall seek to engage with works of O’Connor’s fiction and related debates on good and evil. O’Connor argues that good and evil are relative states and while a person may not be good at a certain point of time, he or she may, through another lens, appear so.
One such instance is the character of Francis Tarwater from the novel The Violent Bear It Away. On the one hand, one may think of him as a despicable character who murders a differently-abled child who is related to him. This murder is also committed at the behest of a character named Vice who is almost always associated with the devil, who is the embodiment of evil in many narratives. The murder, however, also becomes a symbolic baptism as far...
6 Pages(1500 words)Literature review
sponsored ads
Save Your Time for More Important Things
Let us write or edit the essay on your topic "The Good Life" with a personal 20% discount.
GRAB THE BEST PAPER

Let us find you another Essay on topic The Good Life for FREE!