Comments (0)
Add to wishlistDelete from wishlist
Cite this document
Summary
This report is aimed at shedding light on the commercial property market in the United Kingdom. In concrete terms, it looks at the reasons why there has been rental volatility in this market. In doing so, the report draws attention to the fact that the market shows the characteristics of a free market economy such that rental volatility varies from one region to the other across the United Kingdom.
…
Download full paperFile format: .doc, available for editing
HIDE THIS PAPERGRAB THE BEST PAPER94.7% of users find it useful 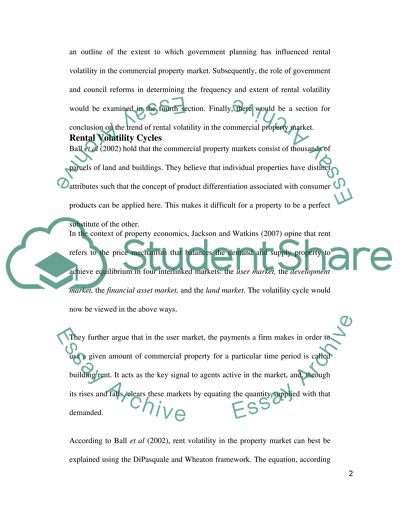 Download file to see previous pages The report establishes that there a number of micro and macro economic factors strongly account for rental volatility in the non-residential property market. These factors ranged from changes in the demand and supply for commercial property, the level of industrialization, interest rates, and government policy on economic and regional development.
This report about rental volatility in the commercial property market is divided into four sections. The first section would look at the cyclical movements in rental volatility, resulting from the interaction of the micro and macro economics factors, as well as government policy on economic and regional development. The second section would make an investigative view on why this rental volatility has witnessed marked variations on a regional basis. Then the third section would give an outline of the extent to which government planning has influenced rental volatility in the commercial property market. Subsequently, the role of government and council reforms in determining the frequency and extent of rental volatility would be examined in the fourth section. Finally, there would be a section for conclusion on the trend of rental volatility in the commercial property market.
Ball et al (2002) hold that the commercial property markets consist of thousands of parcels of l...
This makes it difficult for a property to be a perfect substitute of the other.
In the context of property economics, Jackson and Watkins (2007) opine that rent refers to the price mechanism that balances the demand and supply property to achieve equilibrium in four interlinked markets: the user market, the development market, the financial asset market, and the land market. The volatility cycle would now be viewed in the above ways.
They further argue that in the user market, the payments a firm makes in order to use a given amount of commercial property for a particular time period is called building rent. It acts as the key signal to agents active in the market, and, through its rises and falls, clears these markets by equating the quantity supplied with that demanded.
According to Ball et al (2002), rent volatility in the property market can best be explained using the DiPasquale and Wheaton framework. The equation, according to Dobson and Goddard (1992), maintains that property rents are a function of industrial investment in leasing or buying or new property, the floor space and geographical location. This means that the higher the rate of industrial investment, the higher would be the demand for commercial property. This would certainly drive up the price of property without any certainty in the supply. A look at the demand and supply curve would help clarify this scenario.
Market forces on the demand and supply of property
Price D1 D2 S
P2
P1
Q1 Q2 Property demanded/supplied
For instance, the above diagram shows a typical situation in an increase in the demand for property. In the diagram, there is ...Download file to see next pagesRead More
Share:
Tags
Cite this document
(“PROPERTY ECONOMICS Essay Example | Topics and Well Written Essays - 2000 words”, n.d.)
Retrieved from https://studentshare.org/miscellaneous/1529844-property-economics

CHECK THESE SAMPLES OF PROPERTY ECONOMICS

However, in the case of Re 139 High Street, Deptford2, it was established that there had been a mistake in the conveyancing transaction and that one annexe on the property actually did not belong to the registered owner, who was the legal owner of the land. The owner of the annexe then asked for the register to be amended and this was done accordingly, in recognition of his interest beca...

According to Lord Bridge in the ca...
6 Pages(1500 words)Case Study
sponsored ads
Save Your Time for More Important Things
Let us write or edit the essay on your topic "PROPERTY ECONOMICS" with a personal 20% discount.
GRAB THE BEST PAPER

Let us find you another Essay on topic PROPERTY ECONOMICS for FREE!