Comments (0)
Add to wishlistDelete from wishlist
Cite this document
Summary
The human spirit is capable of great accomplishments. This comes as a result of backbreaking effort, an almost intuitive intellectual ability and the willingness to push the envelope. But these are not the ultimate cause of achievement. That cause lies embedded deep in the wellspring of human passion…
Download full paperFile format: .doc, available for editing
HIDE THIS PAPERGRAB THE BEST PAPER92.6% of users find it useful 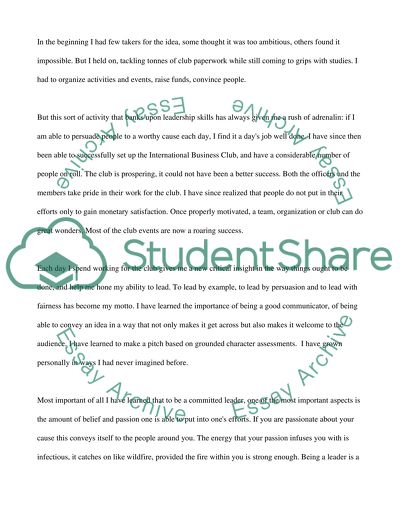 The human spirit is capable of great accomplishments. This comes as a result of backbreaking effort, an almost intuitive intellectual ability and thewillingness to push the envelope. But these are not the ultimate cause of achievement. That cause lies embedded deep in the wellspring of human passion. It is only the passionate espousal of art, sport, poetry, or a way of life, or even a character trait that lifts the commonplace into the realms of the truly extraordinary.
It is also worthy of note that this passion cannot be learned nor cultivated, it is a spontaneous upwelling of one's being. The only choices are to ride on it, to suppress it or subvert it. In my case, I have usually been fortunate enough to be able to ride on it. Since my early childhood at study or play I have always been the popular choice whenever the question of leadership came up.
I could always be counted upon to start off with things that hadn't been done before and soon have a bunch of other people happily doing the same. A few disagreed, of course, but I was frequently able to win them over, sooner rather than later. I have always been seen as fair, capable and full of common sense. Being a leader has thus become a second nature to me, and my passion. Nothing pleases me more than being able to chart a course for a worthy cause.
When I joined school a year back, I was immediately intrigued with the prospect of establishing an International Business Club, the environment seemed ripe for one. I threw up the idea at different forums, and got a positive response. With that vote of confidence I threw all my energies into putting together a club that would harness the potential of students while providing a positive platform for interaction.
In the beginning I had few takers for the idea, some thought it was too ambitious, others found it impossible. But I held on, tackling tonnes of club paperwork while still coming to grips with studies. I had to organize activities and events, raise funds, convince people.
But this sort of activity that banks upon leadership skills has always given me a rush of adrenalin: if I am able to persuade people to a worthy cause each day, I find it a day's job well done. I have since then been able to successfully set up the International Business Club, and have a considerable number of people on roll. The club is prospering, it could not have been a better success. Both the officers and the members take pride in their work for the club. I have since realized that people do not put in their efforts only to gain monetary satisfaction. Once properly motivated, a team, organization or club can do great wonders. Most of the club events are now a roaring success.
Each day I spend working for the club gives me a new critical insight in the way things ought to be done, and help me hone my ability to lead. To lead by example, to lead by persuasion and to lead with fairness has become my motto. I have learned the importance of being a good communicator, of being able to convey an idea in a way that not only makes it get across but also makes it welcome to the audience. I have learned to make a pitch based on grounded character assessments. I have grown personally in ways I had never imagined before.
Most important of all I have learned that to be a committed leader, one of the most important aspects is the amount of belief and passion one is able to put into one's efforts. If you are passionate about your cause this conveys itself to the people around you. The energy that your passion infuses you with is infectious, it catches on like wildfire, provided the fire within you is strong enough. Being a leader is a responsibility, and it can be really hard at times, but nothing beats the satisfaction of watching a positive initiative take root. I am passionate about being a leader and take my job very seriously, and it is a passion that I hope will someday drive me to do great things. Read More
Share:
Tags
Cite this document
(“English Writing Essay Example | Topics and Well Written Essays - 500 words”, n.d.)
English Writing Essay Example | Topics and Well Written Essays - 500 words. Retrieved from https://studentshare.org/miscellaneous/1529596-english-writing

CHECK THESE SAMPLES OF English Writing

The Timeline Approach to Writing

When someone is considering writing something as long as 10 pages or more of text from the experience of maybe 2 or 4 page long papers, they can become easily overwhelmed with where to start and how they’re going to find enough information to fill the required length. A variety of methods have been devised to help people overcome their initial fear and get started with the writing process.  Some suggest starting with general research and others might promote the use of stages or steps in order to get the paper done. The key element of a successful writing process, however, is finding one that suits the individual’s personality, writing style and methods of learning. As a result, in most cases, using one particular...
7 Pages(1750 words)Research Paper

Debate Surrounding the Standard and the Non-Standard English Language

Let us find you another Essay on topic English Writing for FREE!