Comments (0)
Add to wishlistDelete from wishlist
Cite this document
Summary
The question presented is why individuals with similar abilities fail to be successful in the corporate hierarchy. The statistics are overwhelming in support of the dominance of corporate hierarchies by white males. This essay will attempt to identify the barriers to minority success in the American corporate context…
Download full paperFile format: .doc, available for editing
HIDE THIS PAPERGRAB THE BEST PAPER95% of users find it useful 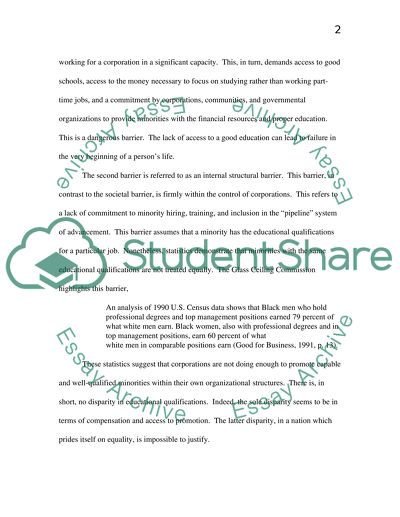 Download file to see previous pages As an initial matter, the barriers to minority success in the corporate world are well-known. A Glass-Ceiling Commission was formed by Congress in 1991 to study the barriers and to make recommendations. Robert Reich, the former Secretary of Labor, described this glass ceiling as "the existence of invisible, artificial barriers blocking women and minorities from advancing up the corporate ladder to management and executive level positions" (Good for Business, 1991, p.iii). The problem, therefore, is not whether such problems exist, for they most certainly exist, but how to remove the barriers to corporate advancement.
The first barrier is defined as a societal barrier, and this type of barrier is considered to be outside the power of the corporation. This barrier refers to educational restraints and to stereotyping and bias, whether conscious unconscious, which affect minorities. Minorities need the educational qualifications to even begin to think about working for a corporation in a significant capacity. This, in turn, demands access to good schools, access to the money necessary to focus on studying rather than working part-time jobs, and a commitment by corporations, communities, and governmental organizations to provide minorities with the financial resources and proper education. This is a dangerous barrier. The lack of access to a good education can lead to failure in the very beginning of a person's life.
The second barrier is referred to as an internal structural barrier. This barrier, in contrast to the societal barrier, is firmly within the control of corporations. This refers to a lack of commitment to minority hiring, training, and inclusion in the "pipeline" system of advancement. This barrier assumes that a minority has the educational qualifications for a particular job. Nonetheless, statistics demonstrate that minorities with the same educational qualifications are not treated equally. The Glass Ceiling Commission highlights this barrier,
An analysis of 1990 U.S. Census data shows that Black men who hold professional degrees and top management positions earned 79 percent of what white men earn. Black women, also with professional degrees and in top management positions, earn 60 percent of what
white men in comparable positions earn (Good for Business, 1991, p. 13).
These statistics suggest that corporations are not doing enough to promote capable and well-qualified minorities within their own organizational structures. There is, in short, no disparity in educational qualifications. Indeed, the sole disparity seems to be in terms of compensation and access to promotion. The latter disparity, in a nation which prides itself on equality, is impossible to justify.
The third barrier is a more generalized governmental barrier. This barrier ranges from the lack of data collection about minorities in private business to weak enforcement of government mandates and poor reporting of problems for minorities in the labor force. It must be admitted, in fairness to corporations, that their primary function is maximizing profits for shareholders. To impose costly and time-consuming governmental duties on corporations would result in dislocations of labor and inefficiencies. That said, it is the duty of the government, whether national, state, or local, to promote and protect the welfare of its ...Download file to see next pagesRead More
Share:
Tags
Cite this document
(“Challenges Minorities Face Trying To Get Ahead in Corporate America Essay”, n.d.)
Challenges Minorities Face Trying To Get Ahead in Corporate America Essay. Retrieved from https://studentshare.org/miscellaneous/1529244-challenges-minorities-face-trying-to-get-ahead-in-corporate-america

“Challenges Minorities Face Trying To Get Ahead in Corporate America Essay”, n.d. https://studentshare.org/miscellaneous/1529244-challenges-minorities-face-trying-to-get-ahead-in-corporate-america.
Comments (0)
Click to create a comment or rate a document

... doctrine, which was published in Part Ten of its Field Manual in 2001. Alderson comments that the “pamphlet is the latest in a line of Army publications that have wrestled with the challenges of applying military force to meet the threat of revolutionary war and insurgency thrown up by the Cold War”9. This has created polarised argument with regard to whether or not we are growing a generation of Counter Insurgency Operations (COIN) professionals at the expense of “real war” fighting capabilities10. However, the challenges faced by the hybrid war model highlight the need to acknowledge the reality of constitutes “real war fighting” capabilities in current and likely future conflict scenarios11. Similarly, from the US military...
7 Pages(1750 words)Article

Apple Inc. is thought to be among the most highly successful companies established in...
8 Pages(2000 words)Case Study
sponsored ads
Save Your Time for More Important Things
Let us write or edit the essay on your topic "Challenges Minorities Face Trying To Get Ahead in Corporate America" with a personal 20% discount.
GRAB THE BEST PAPER

Let us find you another Essay on topic Challenges Minorities Face Trying To Get Ahead in Corporate America for FREE!