Comments (0)
Add to wishlistDelete from wishlist
Cite this document
Summary
Kant and Aristotle both view duty as something that comes, not just from what is lawful or what is expected, but from the inside. Morality has nothing to do with what is expected, but from the character-the inner strength and disposition. However, that is where the similarities end…
Download full paperFile format: .doc, available for editing
HIDE THIS PAPERGRAB THE BEST PAPER98.6% of users find it useful 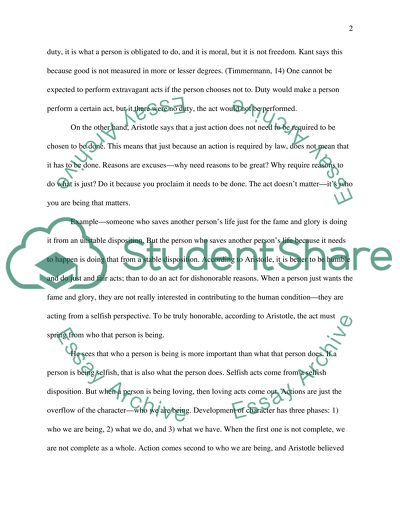 Extract of sample "Kant vs. Aristotle"

Download file to see previous pages Duty is reasons-choice is freedom, and when you can choose what to do, morality and ethics take a back seat. What is considered moral to some people may not be empowering to all people, and when someone says, "This is moral-this is what you have a duty to do. Therefore it is the law", not everyone may agree and will become disempowered when they are required to do the duty. Morality is nothing more than self-delusion and exaggerated conceit. (Timmermann, 10) What one person considers "saintly", may just be "normal" to someone else, and therefore not a moral or ethical duty.
An example of this would be when someone invites a homeless person into their home for a meal. Others may think this is a "saintly" act, but the person who invited the homeless person may just consider it a routine, daily activity-because it is in their nature to do so. It may not be a matter of morality or ethics to this person, but as a normal way of being for him or her-a normal response to the commitment he or she made about a particular issue.
According to Timmerman, Kant believes that an action is only moral when done in the sphere of duty. It cannot be supererogatory, nor can it be a matter of choice. When done from duty, it is what a person is obligated to do, and it is moral, but it is not freedom. Kant says this because good is not measured in more or lesser degrees. (Timmermann, 14) One cannot be expected to perform extravagant acts if the person chooses not to. Duty would make a person perform a certain act, but it there were no duty, the act would not be performed.
On the other hand, Aristotle says that a just action does not need to be required to be chosen to be done. This means that just because an action is required by law, does not mean that it has to be done. Reasons are excuses-why need reasons to be great Why require reasons to do what is just Do it because you proclaim it needs to be done. The act doesn't matter-it's who you are being that matters.
Example-someone who saves another person's life just for the fame and glory is doing it from an unstable disposition. But the person who saves another person's life because it needs to happen is doing that from a stable disposition. According to Aristotle, it is better to be humble and do just and fair acts; than to do an act for dishonorable reasons. When a person just wants the fame and glory, they are not really interested in contributing to the human condition-they are acting from a selfish perspective. To be truly honorable, according to Aristotle, the act must spring from who that person is being.
He sees that who a person is being is more important than what that person does. If a person is being selfish, that is also what the person does. Selfish acts come from a selfish disposition. But when a person is being loving, then loving acts come out. Actions are just the overflow of the character-who we are being. Development of character has three phases: 1) who we are being, 2) what we do, and 3) what we have. When the first one is not complete, we are not complete as a whole. Action comes second to who we are being, and Aristotle believed that when someone's actions are incongruent with who they are being, then the actions are invalid.
Kant, however, believed that choice was more important than duty, and when someone is free to choose what they want to do, they are living in a higher space than someone who is doing something out of duty, because it is "moral". Duty dictates what we "should" do, while ...Download file to see next pagesRead More
Share:
Tags
Cite this document
(“Kant vs. Aristotle Essay Example | Topics and Well Written Essays - 750 words”, n.d.)
Kant vs. Aristotle Essay Example | Topics and Well Written Essays - 750 words. Retrieved from https://studentshare.org/miscellaneous/1529148-kant-vs-aristotle

CHECK THESE SAMPLES OF Kant vs. Aristotle

Kant: Self-Determination in the Age of Reason

... Immanuel Kant Philosophy is the study of different thoughts and how the world works. There have always been philosophers who have studied many ideas and written about them. Most of the time they studied how life worked and how people perceived things. One of the ideas philosophers studied was metaphysics. THE VARIETIES OF ETHICAL THEORY Ethics have been studied for thousands of years and there are many varieties. According to Richard T. Hull there are two types of fundamental ethical theories: those that say a person should choose their actions to "maximize the value or values to be expected as consequences of those actions" (Hull 1) or those that say a person should chose their actions according to a certain standard of duty...
8 Pages(2000 words)Assignment

... the originality of the phenomena, dependability of the existence of any phenomena and the divisions of all phenomena ("SECTION I. System of Cosmological Ideas."). Considering the overall structure based on the experiences, it is very much possible to come up with several claims about the reality which are contradictory to each other. Few ideas of this genre include infinity vs. finitude, complexity vs. simplicity, contingency vs. necessity or determinism vs. freedom. These are termed as ‘Antinomies of Pure Reason’ which could be evaded only when it is recognized that the proofs in support of each antinomy is correct for the particular phenomenal realm concerning it (Kant: Knowledge). The cosmological as well as psychological concept...
6 Pages(1500 words)Assignment

The main differences between the approaches made by American society and the Barbarian society were the purpose behind the invasions. The American society invaded Afghanistan after facing violent attacks from the Islamic anti-social groups. However, the Barbarian invasions in Rome signified the use of power by the leaders in order to capture territories and increase their kingdom. The main purpose behind the attacks made by the U.S. administration was to eliminate the terrorist groups from the world and make the world free f...
10 Pages(2500 words)Essay
sponsored ads
Save Your Time for More Important Things
Let us write or edit the essay on your topic "Kant vs. Aristotle" with a personal 20% discount.
GRAB THE BEST PAPER

Let us find you another Essay on topic Kant vs. Aristotle for FREE!