Comments (0)
Add to wishlistDelete from wishlist
Cite this document
Summary
Since the past couple of years, the world economy has been on a delicate stage, and growth has been pretty slow. In fact, America and the rest of the world has faced a severe recession and financial turmoil, which has left many unemployed and struggling to live…
Download full paperFile format: .doc, available for editing
HIDE THIS PAPERGRAB THE BEST PAPER93.6% of users find it useful 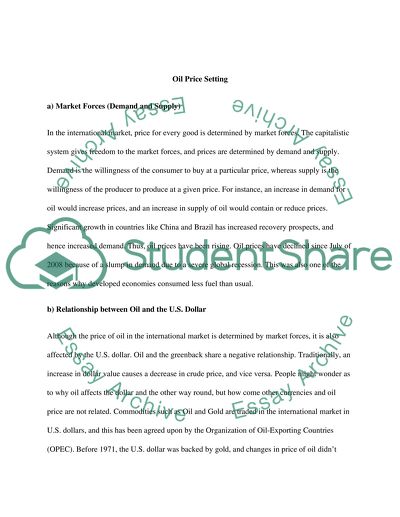 Extract of sample "Oil and Business"

Download file to see previous pages International trade slowed, but still rose because of emerging economies, particularly China and India. However, trade has been affected by the recent hike in oil prices. Furthermore, the publication states that fuel products (oil) saw a relatively lower growth than in previous years, which was due to the high prices of oil in the world market. However, Organization of Petroleum Exporting Countries (OPEC) has increased oil demand growth for 2010 (Brock). Oil is a major commodity in international trade and is one of the most influential commodity to impact business, trade and hence, economies. Today, we will analyze the economics of oil, which would include a detailed analysis into oil prices, and its effects on business and international trade.
In the international market, price for every good is determined by market forces. The capitalistic system gives freedom to the market forces, and prices are determined by demand and supply. Demand is the willingness of the consumer to buy at a particular price, whereas supply is the willingness of the producer to produce at a given price. For instance, an increase in demand for oil would increase prices, and an increase in supply of oil would contain or reduce prices. Significant growth in countries like China and Brazil has increased recovery prospects, and hence increased demand. Thus, oil prices have been rising. Oil prices have declined since July of 2008 because of a slump in demand due to a severe global recession. This was also one of the reasons why developed economies consumed less fuel than usual.
b) Relationship between Oil and the U.S. Dollar
Although the price of oil in the international market is determined by market forces, it is also affected by the U.S. dollar. Oil and the greenback share a negative relationship. Traditionally, an increase in dollar value causes a decrease in crude price, and vice versa. People might wonder as to why oil affects the dollar and the other way round, but how come other currencies and oil price are not related. Commodities such as Oil and Gold are traded in the international market in U.S. dollars, and this has been agreed upon by the Organization of Oil-Exporting Countries (OPEC). Before 1971, the U.S. dollar was backed by gold, and changes in price of oil didn't have an effect on producer profits, as gold had intrinsic value. The U.S. Dollar could be liquidated into gold almost immediately. However, after 1971, dollar was made a fiat currency, and was printed without gold backing. This made it easy for the American government to print money, and hence increase supply. In the last 35-40 years, dollar value has declined significantly amid ever-increasing money supply in the U.S. economy. Therefore, when dollar falls (real value decreases), producers ask for more money to compensate the loss in their real value assets, which are based on U.S. dollars. Thus, a decrease in the dollar has pushed oil prices up in the past decade or so.
c) The role of the OPEC
Besides these factors, the OPEC, which holds two-thirds of the world's fuel reserves, plays a vital role. Refining is done on a large scale in these countries, and they contribute a lot to the world's oil ...Download file to see next pagesRead More
Share:
Tags
Cite this document
(“Oil and Business Term Paper Example | Topics and Well Written Essays - 1500 words”, n.d.)
Oil and Business Term Paper Example | Topics and Well Written Essays - 1500 words. Retrieved from https://studentshare.org/miscellaneous/1528579-oil-and-business

CHECK THESE SAMPLES OF Oil and Business

...﻿Into the Oil BusinessOil is an essential commodity in today’s world, used in many ways like fuel for cars and factories. With the demands of the modern world for fast paced activities, oil has become indispensable, making survival easier for everyone. Thus, the oil business is a good investment to venture in and this is what I am eyeing to be engaging in the next few years. In preparation for this vision, I worked at an oil company for a few months to know the how, twists and turns of the business. The experience had been quite educating and has been an eye opener to how far one’s business could be limited or extended to. One of the important information that I gained in the business is ensuring safety in the workplace. Oil is highly...
1 Pages(250 words)Essay

Climate change and globalization are intricately linked. With the passage of time, many environmental issues, like global warming, have...
6 Pages(1500 words)Coursework
sponsored ads
Save Your Time for More Important Things
Let us write or edit the term paper on your topic "Oil and Business" with a personal 20% discount.
GRAB THE BEST PAPER

Let us find you another Term Paper on topic Oil and Business for FREE!