The problem of corruption in Liberia - Essay Example

Comments (0)
Add to wishlistDelete from wishlist
Cite this document
Summary
After the civil war was brought to an end and Charles Taylor came to power, some refugees were able to return home. During the period 1997- 2000, an estimated 377,000 people were repatriated to Liberia, and some received assistance from UNHCR in doing so (OCHA, 2002)…
Download full paperFile format: .doc, available for editing
HIDE THIS PAPERGRAB THE BEST PAPER91.5% of users find it useful 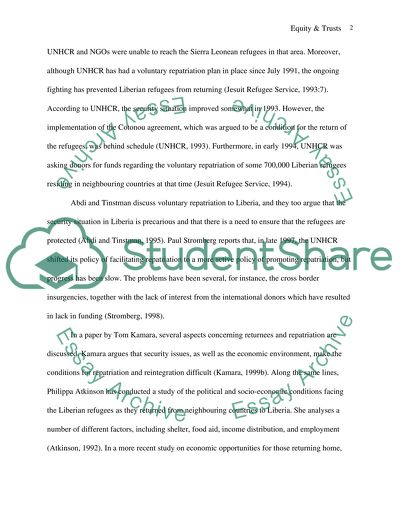 Extract of sample "The problem of corruption in Liberia"

Download file to see previous pages At the beginning of 2002, UNHCR assisted the refugees who voluntarily wanted to repatriate to Sierra Leone, and by the end of September, close to 13,000 refugees had been repatriated. UNHCR intends to continue its work in close cooperation with the Liberia Refugee Repatriation and Resettlement Commission (LRRRC), which is the government institution responsible for constructing and implementing programmes for the displaced in Liberia (UNHCR, 2002c; Kamara, 1999b).
Many of the studies on the topic of resettlement and repatriation emphasise the security conditions and the importance of guaranteeing protection for the refugees. This seems to be a major concern not only throughout the conflict but also in the postwar period. In late 1992 there were reports of security problems, especially in the northern Lofa County, and as a result UNHCR and NGOs were unable to reach the Sierra Leonean refugees in that area. Moreover, although UNHCR has had a voluntary repatriation plan in place since July 1991, the ongoing fighting has prevented Liberian refugees from returning (Jesuit Refugee Service, 1993:7). According to UNHCR, the security situation improved somewhat in 1993. However, the implementation of the Cotonou agreement, which was argued to be a condition for the return of the refugees, was behind schedule (UNHCR, 1993). Furthermore, in early 1994, UNHCR was asking donors for funds regarding the voluntary repatriation of some 700,000 Liberian refugees residing in neighbouring countries at that time (Jesuit Refugee Service, 1994).
Abdi and Tinstman discuss voluntary repatriation to Liberia, and they too argue that the security situation in Liberia is precarious and that there is a need to ensure that the refugees are protected (Abdi and Tinstman, 1995). Paul Stromberg reports that, in late 1997, the UNHCR shifted its policy of facilitating repatriation to a more active policy of promoting repatriation, but progress has been slow. The problems have been several, for instance, the cross border insurgencies, together with the lack of interest from the international donors which have resulted in lack in funding (Stromberg, 1998).
In a paper by Tom Kamara, several aspects concerning returnees and repatriation are discussed. Kamara argues that security issues, as well as the economic environment, make the conditions for repatriation and reintegration difficult (Kamara, 1999b). Along the same lines, Philippa Atkinson has conducted a study of the political and socio-economic conditions facing the Liberian refugees as they returned from neighbouring countries to Liberia. She analyses a number of different factors, including shelter, food aid, income distribution, and employment (Atkinson, 1992). In a more recent study on economic opportunities for those returning home, Rein Dekker studies a group of Ghanaians who moved to Liberia, but due to the war returned to resettle in their home country. The government of Ghana and international agencies were focusing on the Liberian refugees while Ghanaian refugees were left to fend for themselves. However, loan schemes were offered by an NGO, and it is this scheme which Dekker evaluates in her study. Dekker examines the factors that determined whether the refugees were successful in making use of this economic opportunity and able to repay their loans (Dekker, 1995).
Jeff Crisp reports on ...Download file to see next pagesRead More
Share:
Tags
Cite this document
(“The problem of corruption in Liberia Essay Example | Topics and Well Written Essays - 1250 words”, n.d.)
Retrieved from https://studentshare.org/miscellaneous/1528517-the-problem-of-corruption-in-liberia

“The Problem of Corruption in Liberia Essay Example | Topics and Well Written Essays - 1250 Words”, n.d. https://studentshare.org/miscellaneous/1528517-the-problem-of-corruption-in-liberia.
Comments (0)
Click to create a comment or rate a document

CHECK THESE SAMPLES OF The problem of corruption in Liberia

The Social Problem of Homelessness

... not see something does not mean it does not exist. It is amazing that in this country how desensitized to homelessness that many people have, in fact, become. In the largest cities people can walk by dozens of homeless individuals and not even see them; they have become just part of the landscape, like benches and trash cans. The fact that homelessness is so common that it could actually manifest in profound desensitization should be the largest indicator that it is truly a problem, one that needs serious attention. In order to prevent and eliminate homelessness it is important to understand how and why homelessness has become so prevalent in our society? And what is being done to alleviate the issue presently and what may be beneficial...
6 Pages(1500 words)Term Paper
sponsored ads
Save Your Time for More Important Things
Let us write or edit the essay on your topic "The problem of corruption in Liberia" with a personal 20% discount.
GRAB THE BEST PAPER

Let us find you another Essay on topic The problem of corruption in Liberia for FREE!