Comments (0)
Add to wishlistDelete from wishlist
Cite this document
Summary
As American Airlines Flight 191 took off from Chicago-O'Hare International Airport on May 25, 1979, "the left engine and pylon assembly separated from the aircraft, went over the top of the wing, and fell to the runway" (Failure Analysis, 2008, pg. 1). The McDonnell-Douglas DC 10-10 aircraft climbed 325 feet, rolled, and crashed to the ground as a result of contributing mechanical and structural failures…
Download full paperFile format: .doc, available for editing
HIDE THIS PAPERGRAB THE BEST PAPER97.8% of users find it useful 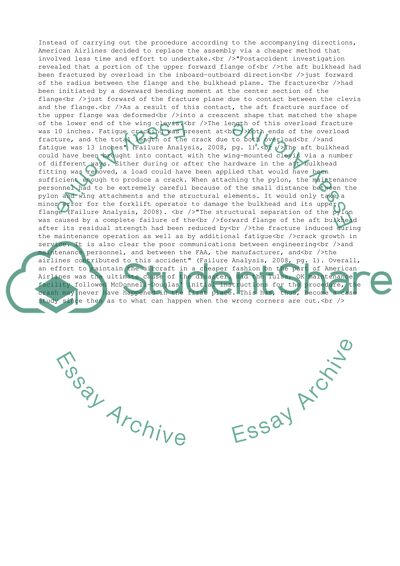 American Airlines Flight 191 As American Airlines Flight 191 took off from Chicago-O'Hare International Airport on May 25, 1979, "the left engine and pylon assembly separated from the aircraft, went over the top of the wing, and fell to the runway" (Failure Analysis, 2008, pg. 1). The McDonnell-Douglas DC 10-10 aircraft climbed 325 feet, rolled, and crashed to the ground as a result of contributing mechanical and structural failures. Everybody onboard the plane, as well as two people that were on the ground, were killed. At the time, it was the worst loss of life in aviation history.
The aircraft had a total of 19,871 flight hours. 341 of those flight hours had occurred after a maintenance procedure in Tulsa, OK that has since been tied to the crash. This maintenance procedure is believed to have led to the engine separating from the wing. The procedure was carried out because McDonnell-Douglas issued a service bulletin requiring that the "upper and lower spherical bearings that attached the pylon to the wing" (Failure Analysis, 2008, pg. 1) be replaced. Instead of carrying out the procedure according to the accompanying directions, American Airlines decided to replace the assembly via a cheaper method that involved less time and effort to undertake.
"Postaccident investigation revealed that a portion of the upper forward flange of
the aft bulkhead had been fractured by overload in the inboard-outboard direction
just forward of the radius between the flange and the bulkhead plane. The fracture
had been initiated by a downward bending moment at the center section of the flange
just forward of the fracture plane due to contact between the clevis and the flange.
As a result of this contact, the aft fracture surface of the upper flange was deformed
into a crescent shape that matched the shape of the lower end of the wing clevis.
The length of this overload fracture was 10 inches. Fatigue cracking was present at
both ends of the overload fracture, and the total length of the crack due to both overload
and fatigue was 13 inches" (Failure Analysis, 2008, pg. 1).
The aft bulkhead could have been brought into contact with the wing-mounted clevis via a number of different ways. Either during or after the hardware in the aft bulkhead fitting was removed, a load could have been applied that would have been sufficient enough to produce a crack. When attaching the pylon, the maintenance personnel had to be extremely careful because of the small distance between the pylon and wing attachments and the structural elements. It would only take a minor error for the forklift operator to damage the bulkhead and its upper flange (Failure Analysis, 2008).
"The structural separation of the pylon was caused by a complete failure of the
forward flange of the aft bulkhead after its residual strength had been reduced by
the fracture induced during the maintenance operation as well as by additional fatigue
crack growth in service. It is also clear the poor communications between engineering
and maintenance personnel, and between the FAA, the manufacturer, and
the airlines contributed to this accident" (Failure Analysis, 2008, pg. 1). Overall, an effort to maintain the aircraft in a cheaper fashion on the part of American Airlines was the ultimate cause of the disaster. Had the Tulsa, OK maintenance facility followed McDonnell-Douglas' initial instructions for the procedure, the crash may never have happened in the first place. This has, thus, become a case study since then as to what can happen when the wrong corners are cut.
References
Failure analysis. (2008). Wiley. Retrieved July 6, 2008, from http://media.wiley.com/product_data/excerpt/60/04714143/0471414360.pdf Read More
Share:
Tags
Cite this document
(“American Airlines Flight 191 Case Study Example | Topics and Well Written Essays - 500 words”, n.d.)
American Airlines Flight 191 Case Study Example | Topics and Well Written Essays - 500 words. Retrieved from https://studentshare.org/miscellaneous/1525765-american-airlines-flight-191

...? Continental Airlines Flight 1404: Research Paper (Add (Add (Add Continental Airlines Flight 1404: Research Paper Abstract Since the public demand for air travel has dramatically improved over the last two decades, the Federal Government and the aircraft manufacturing industry have given specific focus to accident survivability since 1990s. Earlier, nearly 90 percent of the aircraft accidents were grouped as survivable or technically survivable. As part of this initiative, a range of new features are integrated into aircraft at the design stage. The aircraft manufacturing industry collected details of several fatal air accident incidents and identified the key issues led...
5 Pages(1250 words)Research Paper

...?  American AirlinesAmerican Airlines Question The short-term concentration on stock price by senior management in a public traded corporation may promote unethical activities. An increasing body of investigation founded on both comprehensive case studies and laboratory examinations, indicates that all people are at risk of misjudging individual capacity to engage in what is perceived as correct and therefore a number of times behave in an unethical way without intending to. Current studies also tend to highlight the significant effect of external sways on an individual’s ethical selections, including the way corporations design anticipated results as gains or...
5 Pages(1250 words)Assignment

...? American Airlines (AMR Corporation) American Airlines (AMR Corporation Stock trading has become one of the foremostenterprising projects in the business world today, and as a result, there is a lot of gains that can be made from trading in stocks of public companies (DePamphilis, 2009). This activity involves the buying and selling of a company’s shares by individuals whose objective is to make earnings from the transactions they participate in and involves a number of skills such as the ability to foretell the movement of stock prices as well as the courage to take the risk of involving one’s self in such a volatile market (Sandage, 2006). This is because the business of stock trade holds no assurances and one has the potential... is...
5 Pages(1250 words)Research Paper

...? High Flight Airlines of the of the Number Mission ment High Flight Airlines (HFA) will be the most favored domestic airline in South-east Asia. It will be the routine primary choice carrier for the travelling public and set benchmarks, which other competing airlines will seek to match (Jet Airways, “Our Mission Statement”). HFA will attain this paramount position by offering a high quality of service and consistent, comfortable and proficient operations. The company will cater to improve the impression of domestic airline travel into a world class domestic airline. HFA will attain these objectives...
11 Pages(2750 words)Essay

...Case Study of Aloha Airlines Flight 243 AIRCRAFT ACCIDENT REPORT ALOHA AIRLINES, FLIGHT 243 BOEING 737-200, N7371I, NEAR MAUI, HAWAII APRIL 28, 1988 The damage to Aloha Airlines Flight 243 estimated to be about $5 million, it was beyond repair after being dismantled it was sold for parts and scrap. Due to an explosive decompression of the cabin the upper crown skin and structure of section 43 separated during the flight, the damaged area which was near the main cabin entrance door extended all the way up to the forward of the wings (about 18 feet) and from the left side of the cabin at floor level to the right side...
2 Pages(500 words)Essay

...JAPAN AIRLINES FLIGHT 123: MECHANICAL AND STRUCTURAL FACTORS Flight accident often occurs due to one reason or another. The detestable accidents which do happen are inevitable to human. The causes of flights incidents can be attributed to primary factors which are structural, mechanical and human error factors. This can occur as primary factors or secondary factor. In the case study of the flight incident for the Japan airlines flight 123 registered as ja8119, the flight was a departure from Tokyo to Osaka. The factors are analyzed as follows: Mechanical Primary factors The airplane was said to have...
2 Pages(500 words)Essay

...﻿ Trans World Airlines Flight Attendance The case study explains the events that took place during a 1986 strike by the Independent Federation of Flight Attendants (IFFA), a federation that worked for Trans World Airlines (TWA) (Wallace, n.d.). The strike started on 6 March 1986 and it turned out to be the most relevant labor disputes in explaining the continuity of relations that subsist under the Railway Labor Act. A one-sided action by an employer does not deny a labor union the right to represent its members. TWA’s majority shareholder at the time was Carl Icahn who became the chairperson of the airlines board in January 1986. The strike happened...
4 Pages(1000 words)Case Study

...an unintended situation happens in lessening in limits of safety. It has been established that undesired states that are as a result of ineffective threat or error controlling may lead to bargained situations; hence, reducing the limits of safety in flight operations Threat and Error Management accepts that human error will occur, which is a shift from what was believed previous by the airline safety belief. Therefore, TEM is a predominant safety concept that relates to flight operations and human actions. Although not a revolutionary concept, it has evolved gradually because of the continuous drive to develop the boundaries of safety in flight operations through...
7 Pages(1750 words)Essay

...American Airlines Flight 1420 McDonnell Douglas MD-82, N215AA and Air travel is relatively less prone to accidents compared to other modes of transport, but it has never been a haven as such events have always been recorded all over the world through over spaced out spells. A number of factors are cited as causes of such accidents with human elements, technical hitches, and adverse weather conditions being top on that list. We shall be keen to go through the accident report detail involving American Airlines Flight 1420 that happened back in 1999 on 1st June, in Little Rock, Arkansas. We shall identify the cited causes, underscore several key human factor failures and investigate how each of them generated some other failures... by that...
4 Pages(1000 words)Research Paper

...﻿American Eagle Airlines Flight 3379 Accident Introduction The research focuses on the factors contributing to air accidents. The pilot’s experience will be considered as a major factor contributing to air accidents on several occasions. To support this assertion, the researcher aims at focusing on the major cause of the American Eagle Airlines flight 3379 accident. The main assumption is that the accident could have been caused by lack of experience on the part of the pilots, and failing to follow the right procedure in addressing impending danger. The research also seeks to state that the accident may have been prevented had the pilot consulted the relevant authority immediately the plane began experiencing mechanical problems... . The...
5 Pages(1250 words)Research Paper
sponsored ads
Save Your Time for More Important Things
Let us write or edit the case study on your topic "American Airlines Flight 191" with a personal 20% discount.
GRAB THE BEST PAPER

Let us find you another Case Study on topic American Airlines Flight 191 for FREE!