Comments (0)
Add to wishlistDelete from wishlist
Cite this document
Summary
This essay stresses that the industrialization has generated different regions according to the activities performed in those particular regions. The workstations are separated from the colonies to enhance the proximity to the resources necessary to that industry…
Download full paperFile format: .doc, available for editing
HIDE THIS PAPERGRAB THE BEST PAPER97% of users find it useful 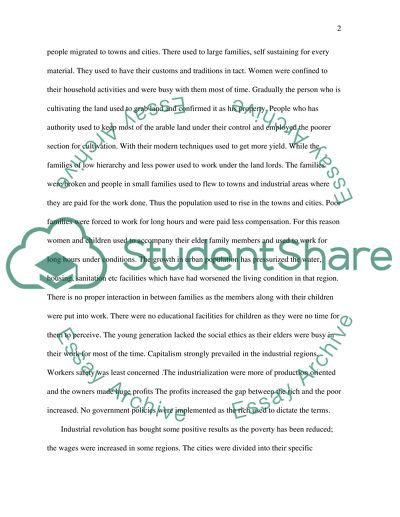 Download file to see previous pages section for cultivation. With their modern techniques used to get more yield. While the
families of low hierarchy and less power used to work under the land lords. The families
were broken and people in small families used to flew to towns and industrial areas where
they are paid for the work done. Thus the population used to rise in the towns and cities. Poor
families were forced to work for long hours and were paid less compensation. For this reason
women and children used to accompany their elder family members and used to work for
long hours under conditions. The growth in urban population has pressurized the water,
housing, sanitation etc facilities which have had worsened the living condition in that region.
There is no proper interaction in between families as the members along with their children
were put into work. There were no educational facilities for children as they were no time for
them to perceive. The young generation lacked the social ethics as their elders were busy in
their work for most of the time. Capitalism strongly prevailed in the industrial regions.
Workers safety was least concerned .The industrialization were more of production oriented
and the owners made huge profits The profits increased the gap between the rich and the poor
increased. No government policies were implemented as the rich used to dictate the terms.
Industrial revolution has bought some positive results as the poverty has been reduced;
the wages were increased in some regions. The cities were divided into their specific
activities like the industrial areas, the marketing areas, the administrative areas. The working
classes were ill-treated in the initial periods of industrialization. The workers...
This essay discusses that education was a major concern in the industrial revolution days as people of all ages were busy in their work which lasts for 15 to 18 hours a day. Elders were educated about the mechanics of the machines and their operations. Gradually in the first quarter of the eighteenth century in England, child education was made compulsory up to 12 years. Children who were educated up to certain age were allowed part-time to work.The social responsibility was highlighted in the period of industrial revolution. This is addressing the concern of the widows, the injured soldiers and the people below poverty line. The private wealthy society was encouraged to generously participate in providing the basic needs of the needy in that period. The industrial revolution has created immense wealth for many sections which propelled them to organize aid to the people who were in distress. The increase in the communications and the accessibility to the issue regions has pushed the assistance further more. The attitudes have kept changing which resulted in a lot of nongovernmental organizations which started addressing the concerns of the poor. The social responsibility has been projected as a ritual for the wealthy and status to dissipate the surplus to the needy. The philanthropic values gradually spread to eradicate the social evils like alcoholic consumption, the abolition of slavery, improved work environment in factories and fight for the social concerns community wise. ...Download file to see next pagesRead More
Share:
Tags
Cite this document
(“Industrial Revolution Essay Example | Topics and Well Written Essays - 1000 words”, n.d.)
Retrieved from https://studentshare.org/miscellaneous/1525508-industrial-revolution

CHECK THESE SAMPLES OF Industrial Revolution

...?Topic:  Industrial Revolution Industrial change is a radical transformation which took place between 18th and 19th century, which changed the socio-economical status of the many countries around the west. It was a phase in which, there had a credible effect on all the social classes, agricultural, manufacturing and transportation field of a society According to (Lewis) “The Industrial Revolution is the name given the movement in which machines changed people's way of life as well as their methods of manufacture”. It is almost impossible to imagine what the world would be like if the effects of the Industrial Revolution...
3 Pages(750 words)Essay

...Industrial Revolution Industrial revolution is a factor of more industries emerging because of increased power of innovation driven by technological advancement. Every technology that is brought forward increases the potential for nations and individual to put up more industries that produces products to cater for increasing market demands globally. Every technology however, has its pros and cons and it is important to review some of the articles as highlighted by the economist. To begin with, the first article to look at is then layer-by-layer on how a three-dimension printer works. Three-dimension printing includes a progression in...
3 Pages(750 words)Book Report/Review

...?Industrial revolution Industrial revolution Industrialization revolution is described as a long economic change lasting over a century and comprise of several advantages and disadvantages. In fact, there are several advantages associated with the change and disadvantages as a result of the change in societal values and principles. Industrial revolution led to change the approach employed in operations including farming and production processes. Therefore, it was integral for the development of the modern society which shifted from the agricultural systems to industrial systems. In addition, it enabled urbanization process to be fast as cities experienced rapid change in the approach employed in the production process. Benefits... of the...
3 Pages(750 words)Essay

...Industrial Revolution Order No. 276191 No. of pages: 4 1st 6530 Introduction The Industrial Revolution first occurred in Britain in thelate 18th and early 19th centuries. This period is defined as the “Period marking the introduction of mass production, improved transportation, technological progress, and the industrial factory system. In the United States this period is generally agreed to have begun at the time of the Civil War (1861-1865).” (Business Dictionary) the main phase of the revolution was that a great change was brought about in the field of technology which involved new techniques in the use of machinery. It was the...
4 Pages(1000 words)Essay

... Industrial Revolution This is unending changing of technology and development of the economy. It did replace human powerwith machine, hence transforming agriculture. Again, it is the era in which crucial changes occurred gradually (Dean 120). The affected areas were the textile and metal manufacturing, transportation and economics just to mention a few. To be precise, let us consider the following core factors. Agriculture Changes Agriculture occupies a substantial part in the life of human beings. Its importance was not only rooted in the subsistence of life but was also a vital form of raw materials for textile firms. For instance, agriculture enhanced production of wool and cotton, which recorded an increase in year (Moris 90... observed...
1 Pages(250 words)Research Paper

...Irshad Ahmad Academia-Research.Com Order # 746175 November 13, Industrial Revolution Industrial Revolution refers to the period of history between 1750 to 1850. The world saw modifications in agriculture, manufacturing, methods of transportation and technology. Such modifications were outstanding and cast a deep effect on the cultural, economical and social conditions of the world. It looked like the world had changed completely with respect to its priorities. Industrial Revolution began in Great Britain. From Great Britain, it took roots in the whole of Europe, North America and Japan. Eventually the fruits of the...
2 Pages(500 words)Book Report/Review

...Industrial Revolution During the period between 1760 and 1850, fundamental changes took place in manufacturing processes, culminating into the transition from hand-based production methods to machines, chemical processes and the use of steam power. This era was known as the Industrial Revolution and, in particular, transformed the textile, metal, transport and agriculture industries as well as social structure and economic policies in Britain. For the Industrial Revolution to occur, various conditions had to be in place. This paper will research on the important conditions, technological developments, and productive...
2 Pages(500 words)Essay

Let us find you another Essay on topic Industrial Revolution for FREE!