Comments (0)
Add to wishlistDelete from wishlist
Cite this document
Summary
Exigencies in the global energy market in the past nine years have been in part to the energy sector's convergence with the environmental securities markets, and the carbon market in particular. In response to climate change legislation of the Kyoto Protocol and its subsequent accords, Australia's framework for recommended GHG emissions regulations has resulted in new models of economic and legal practice…
Download full paperFile format: .doc, available for editing
HIDE THIS PAPERGRAB THE BEST PAPER97.3% of users find it useful 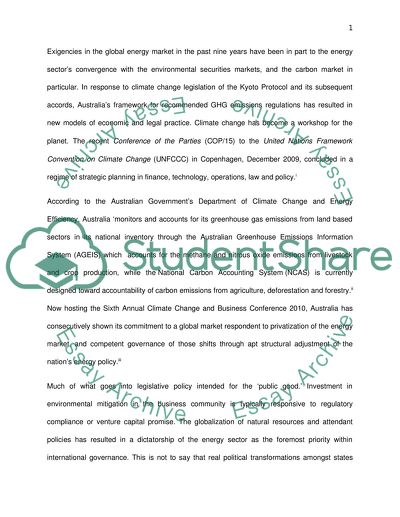 Download file to see previous pages According to the Australian Government's Department of Climate Change and Energy Efficiency, Australia 'monitors and accounts for its greenhouse gas emissions from land based sectors in its national inventory through the Australian Greenhouse Emissions Information System (AGEIS) which accounts for the methane and nitrous oxide emissions from livestock and crop production, while theNational Carbon Accounting System(NCAS) is currently designed toward accountability of carbon emissions from agriculture, deforestation and forestry.ii Now hosting the Sixth Annual Climate Change and Business Conference 2010, Australia has consecutively shown its commitment to a global market respondent to privatization of the energy market, and competent governance of those shifts through apt structural adjustment of the nation's energy policy.iii
Much of what goes into legislative policy intended for the 'public good.' Investment in environmental mitigation in the business community is typically responsive to regulatory compliance or venture capital promise. The globalization of natural resources and attendant policies has resulted in a dictatorship of the energy sector as the foremost priority within international governance. This is not to say that real political transformations amongst states have not also contributed to this new regime of power. For instance, since the collapse of the former Soviet Bloc countries, Eastern European energy resource management has been one of the core economic interests of international energy holdings vested in the transition from state to privatized incorporation. The structural adjustment policies of the 1990s, which led to privatization policies in second world economies are still affecting the administrative capacity behind energy resource distribution to populations dependent upon those forces of negotiation between international energy management stakeholders, and sometime corrupted or underdeveloped legal and regulatory capacity in those states.iv
In Australia, the widely acceptable practice of retraction of central authority toward intense regulation of the industry by way of law, rather than volunteerism, was extended to states which now determine the regulatory relationship between energy and consumer market. Comparatively, Australia has done much in terms of promoting advancements in energy innovation as well, with an eye on technology and proximity to the Asian market, Australia is well poised to participate fully and competitively in the new global energy market. The global picture outside the region also reveals distinctions. It is through an examination of the dense regulatory structure of the United States that we can see what Australia is, and what it is not, in terms of party to international policy. Without such as radical window of comparison, in a parallel common law setting, we might not see the business, legal and political culture(s) at work in two distinct economies of scale. In the United States, where the energy industry has been the intense focus of scrutiny in response to high level hazard incidents, such as the Three Mile Island case. Amid reconfiguration of nuclear power as part of a matrix of alternative, 'clean air' energy options, there is a significant push toward advancement of regulatory competence.
The essay focuses on the impact of the climate change ...Download file to see next pagesRead More
Share:
Tags
Cite this document
(“Public utility management in australia Term Paper”, n.d.)
Public utility management in australia Term Paper. Retrieved from https://studentshare.org/miscellaneous/1525088-public-utility-management-in-australia

CHECK THESE SAMPLES OF Public utility management in australia

Due to extraordinary characteristics of natural gas: high concentration of methane, efficiency in heat generation, and ecological safety, the global tendency, despite a higher price, is to use natural gas widely in transportation and electricity generation. The negative economic consequences for private and residential users resulting from gas usage are hoped to be covered through an increase in funding of natural gas technology development and local transportation subsidies.
2. The uniqueness of public utility sector makes it one of the most vulnerable constitutes of national economy, this is the major introduced in the article “Priority Required for Utility Security” published in Washington Times. US electric, oil, gas, nucl...
5 Pages(1250 words)Essay

Civil Aviation Administration of China (CAAC) – undoubtedly advanc...
7 Pages(1750 words)Assignment
sponsored ads
Save Your Time for More Important Things
Let us write or edit the term paper on your topic "Public utility management in australia" with a personal 20% discount.
GRAB THE BEST PAPER

Let us find you another Term Paper on topic Public utility management in australia for FREE!