Comments (0)
Add to wishlistDelete from wishlist
Cite this document
Summary
Willie Bosket is considered by many to be New York's most dangerous inmate. With his life a never-ending rage, Willie is kept in near-solitary confinement within three cells, incarcerated for five years for a casual double murder on the New York City Subway at age 15…
Download full paperFile format: .doc, available for editing
HIDE THIS PAPERGRAB THE BEST PAPER91.3% of users find it useful 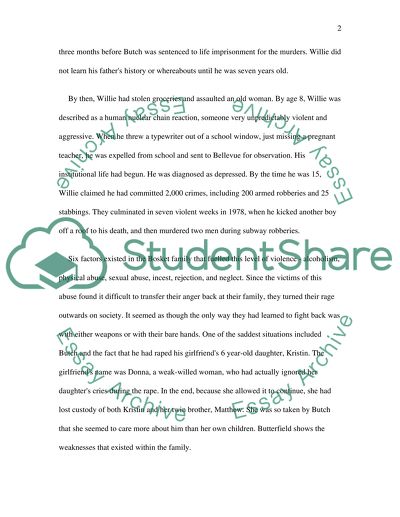 Download file to see previous pages All God's Children is an exceptionally well written and finely researched book, detailing how violence in the African American community and primarily in the Bosket family, saw roots from the violence that was the norm in South Carolina, where the Boskets came from. It is the sobering story of Willie Bosket's family, from his ancestors down to his parents and siblings, explaining how families can be doomed when they remain outside mainstream society and who have no access to opportunity or given any hope. Butterfield does a fine job describing the criminal justice system as it relates to children and how we have come to treat 12 and 13 year old children like adults.
In July 1962, while Willie was still in the womb, his father, Butch, stabbed two men in the heart in a Milwaukee pawnshop. Willie's mother, Laura gave birth to him in Harlem, three months before Butch was sentenced to life imprisonment for the murders. Willie did not learn his father's history or whereabouts until he was seven years old.
By then, Willie had stolen groceries and assaulted an old woman. By age 8, Willie was described as a human nuclear chain reaction, someone very unpredictably violent and aggressive. When he threw a typewriter out of a school window, just missing a pregnant teacher, he was expelled from school and sent to Bellevue for observation. His institutional life had begun. He was diagnosed as depressed. By the time he was 15, Willie claimed he had committed 2,000 crimes, including 200 armed robberies and 25 stabbings. They culminated in seven violent weeks in 1978, when he kicked another boy off a roof to his death, and then murdered two men during subway robberies.
Six factors existed in the Bosket family that fuelled this level of violence - alcoholism, physical abuse, sexual abuse, incest, rejection, and neglect. Since the victims of this abuse found it difficult to transfer their anger back at their family, they turned their rage outwards on society. It seemed as though the only way they had learned to fight back was with either weapons or with their bare hands. One of the saddest situations included Butch and the fact that he had raped his girlfriend's 6 year-old daughter, Kristin. The girlfriend's name was Donna, a weak-willed woman, who had actually ignored her daughter's cries during the rape. In the end, because she allowed it to continue, she had lost custody of both Kristin and her twin brother, Matthew. She was so taken by Butch that she seemed to care more about him than her own children. Butterfield shows the weaknesses that existed within the family.
This book seamlessly ties two issues together. On the one hand, it is a fascinating and detailed true crime study of Willie Bosket and on the other hand it's a study of the origins of violence in America.
With a surprisingly detailed research, the author was able to trace Willie Bosket's ancestry back to his slave ancestors, and follow the escalating evolution of violence and criminality in each succeeding generation of the Bosket family. The book begins in pre-revolutionary era with a study of white violence in the region of North Carolina where Willie's ancestors were enslaved. The author persuasively argues that the primary origin of black violence is the tradition of white violence that was transferred to them from their former slave owners.
Butterfield contends that the white Southern mentality of easily aggrieved honor has made its way through time and the descendants ...Download file to see next pagesRead More
Share:
Tags
Cite this document
(“All God's Children (Fox Butterfield) Book Report Essay”, n.d.)
Retrieved from https://studentshare.org/miscellaneous/1524633-all-gods-children-fox-butterfield-book-report

...? Book Summary All God’s Children is a book that gives a detailed cases study of Willie Bosket who has created a record of being oneof the most violent criminals in America. The author, Fox Butterfield is a believer in the implicit theory when explaining the source of violence in individuals. In this book, he gives the history of violence through Bosket family through five generation. He starts with Bosket great grandfather who was an African American slave in to his grandfather, father and now Bosket (Butterfield 2008). The story is also a n illustration of the oppression that the...
6 Pages(1500 words)Book Report/Review

All God's Children by Fox Butterfield

...? ALL GOD'S CHILDREN BY FOX BUTTERFIELD Book summary All God’s Children It is a Bosket Willie’s case study – the most dangerous criminal in the State of New York antiquity. Butterfield’s argument is far beyond the ordinary, although, as he documents the origin of behavior of Bosket from five generations to the overall violence culture of today’s Edgefield nation, whereby the ancestors of Bosket were slaves. In the story telling, Butterfield shows a critical theory of violence roots that spreads all over the five generations explained in...
4 Pages(1000 words)Book Report/Review

....' And I wasn't. I was the first person who let him down" (cited in MacQueen, 2010). Terry was not sure that his running will help cure cancer, but he still hoped so. When he applied to Canadian Cancer Society asking for funding his project, he wrote: “we need your help. The people in cancer clinics all over the world need people who believe in miracles. I am not a dreamer, and I am not saying that this will initiate any kind of definitive answer or cure to cancer. I believe in miracles. I have to” (cited in Cosentino, 1990). Though the mission of Terry Fox remained unfinished, others continue reaching his goal. We should hope that one day cancer will be successfully treated and many lives will be saved....
3 Pages(750 words)Essay

...(15 min.) "If youre not already sitting criss-cross, quickly get into position. It will be necessary for the second activity were going to be doing while I read you the book." Do read aloud with Fox in Socks (Instruct students to clap when they hear Knox and slap their knees when they hear Fox) (Cross off/highlight words on list as they are read in book, after children point them out) "Fox in Socks is a book that is made up of tongue twisters, phrases that are really hard to say. Another example of a tongue twister is "rubber baby buggy bumpers" can you think of any others? Closure (Eliciting behavior) (10...
2 Pages(500 words)Essay

The Semiology of Cubism

...Q Ans. I found this assignment challenging because while it is easy to spot the forms of media created solely for women e.g. fashion shows, jewelry exhibitions, makeup tutorials, and cooking classes, it is a little difficult to find something solely produced or created by women. Nevertheless, I read Harry Potter by J.K. Rowling. Q. 2: Ans. I did not cheat at all during the week. However, I must confess that I was inclined to cheat as I was not finding anything solely produced by a woman in the media but just then, Harry Potter Part 6 in the shelf of my room caught my attention as this book qualified as a form of media written solely by a woman. Q. 3: Ans. Yes, I would not have read Harry Potter Part 6 recently had it not been... for this...
1 Pages(250 words)Assignment
sponsored ads
Save Your Time for More Important Things
Let us write or edit the essay on your topic "All God's Children (Fox Butterfield) Book Report" with a personal 20% discount.
GRAB THE BEST PAPER

Let us find you another Essay on topic All God's Children (Fox Butterfield) Book Report for FREE!