Comments (0)
Add to wishlistDelete from wishlist
Cite this document
Summary
When we talk about a leader, we mean that a person who knows the only constant of life that is 'change', because he/ she is the one who knows how to make necessary modifications in his ways and manners of working in order to be effective, competent and successful…
Download full paperFile format: .doc, available for editing
HIDE THIS PAPERGRAB THE BEST PAPER95.2% of users find it useful 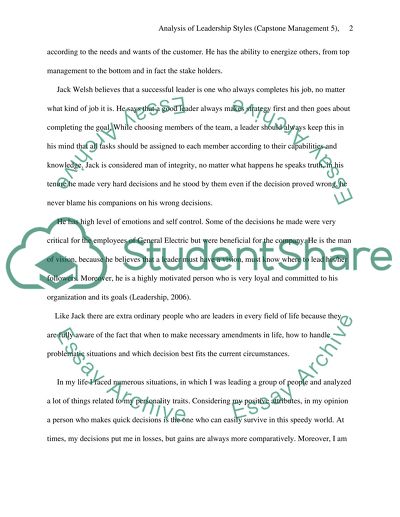 Analysis of Leadership Styles (Capstone Management 5) When we talk about a leader, we mean that a person who knows the only constant of life that is 'change', because he/ she is the one who knows how to make necessary modifications in his ways and manners of working in order to be effective, competent and successful. If we need to justify the value for a changing leadership style, then we can simply recall few eminent leaders of the past and present, who are known for their styles that vary according to the needs and requirements and they pretty well are aware of the fact that for a leader, the value is his/her style and personality traits that make others work and obey the commands.
Today most of the Fortune 500 are from USA, not because of the human capital, diversification, creativity, (although they too contribute in business success) but due to the leaders they have such as Bill Gates, Warren Buffet, Jack Welch and so on. We know that these people have inspired millions through their big ideas, inspirations, their timely decision making processes etc.
When Jack Welch took charge of General Electric, the total worth of company was US$ nine billion and at the time when he left General Electric, after almost twenty years, the company's financial worth was US$ 500 billion. This figure itself speaks about the leadership skills Jack Welsh possesses. He is a man who has a lot of energy. During his stay in General Electric he acquired a lot of new businesses, streamlined plenty of strategic business units and plenty of mergers and acquisitions which needed loads of enthusiasm, courage and timely decision making. From day first in the General Electric, Jack always came up with new ideas and notions, which reaped fruitful results for his company. He is a man of change, he believed that keep changing positively will leave the competitors far behind, because while changing you grow according to the needs and wants of the customer. He has the ability to energize others, from top management to the bottom and in fact the stake holders.
Jack Welsh believes that a successful leader is one who always completes his job, no matter what kind of job it is. He says that a good leader always makes strategy first and then goes about completing the goal. While choosing members of the team, a leader should always keep this in his mind that all tasks should be assigned to each member according to their capabilities and knowledge. Jack is considered man of integrity, no matter what happens he speaks truth, in his tenure he made very hard decisions and he stood by them even if the decision proved wrong, he never blame his companions on his wrong decisions.
He has high level of emotions and self control. Some of the decisions he made were very critical for the employees of General Electric but were beneficial for the company. He is the man of vision, because he believes that a leader must have a vision, must know where to lead his/her followers. Moreover, he is a highly motivated person who is very loyal and committed to his organization and its goals (Leadership, 2006).
Like Jack there are extra ordinary people who are leaders in every field of life because they are fully aware of the fact that when to make necessary amendments in life, how to handle problematic situations and which decision best fits the current circumstances.
In my life I faced numerous situations, in which I was leading a group of people and analyzed a lot of things related to my personality traits. Considering my positive attributes, in my opinion a person who makes quick decisions is the one who can easily survive in this speedy world. At times, my decisions put me in losses, but gains are always more comparatively. Moreover, I am at all times, very confident about what I do and this helps me in my character building. On the contrary, I dislike my habit of being stubborn and for it I bear heavy losses in my life.
References
"Leadership" 2006. Businessballs.com. 11th August 2007.
www.businessballs.com Read More
Share:
Tags
Cite this document
(“Leadership Styles Essay Example | Topics and Well Written Essays - 500 words”, n.d.)
Leadership Styles Essay Example | Topics and Well Written Essays - 500 words. Retrieved from https://studentshare.org/miscellaneous/1521758-leadership-styles

CHECK THESE SAMPLES OF Leadership Styles

Once a manager decides on something, his subordinates are required to follow whatever he tells them or else he would have to use the power and authority vested in him to reprimand those who go against his directives. Managers are not their own bosses and as such, they are motivated by the salaries which they are paid for their services. This also makes them subordinates who follow orders from their bosses and who hold them accountable for the progress or failure of the business. Management is a process that focuses on ensuring that there is stability in the organization as well as proper utilization of resources in order to create a harmonious environment for maximizing profits while also minimizing risks, which is the overall sen...
6 Pages(1500 words)Literature review
sponsored ads
Save Your Time for More Important Things
Let us write or edit the essay on your topic "Leadership Styles" with a personal 20% discount.
GRAB THE BEST PAPER

Let us find you another Essay on topic Leadership Styles for FREE!