Comments (1)
Add to wishlistDelete from wishlist
Cite this document
Summary
When a child is born, he or she would already have over 100 billion neurons or brain cells, enough to last a lifetime, and no new neurons will develop after birth. Neurons are connected to each other with synapses which form the wiring of the brain. The strength and function of these connections are largely determined by the child's early experiences, thus supporting the theory that stimulation affects early brain development…
Download full paperFile format: .doc, available for editing
HIDE THIS PAPERGRAB THE BEST PAPER94% of users find it useful 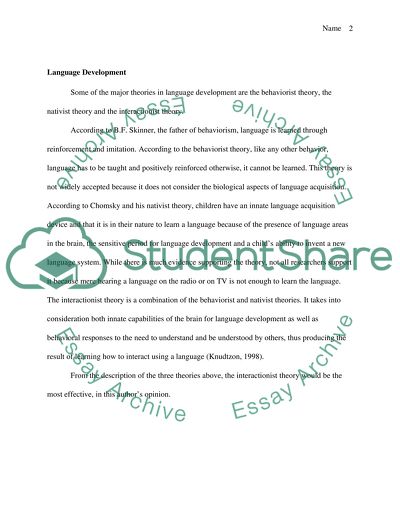 Cognitive Development When a child is born, he or she would already have over 100 billion neurons or brain cells, enoughto last a lifetime, and no new neurons will develop after birth. Neurons are connected to each other with synapses which form the wiring of the brain. The strength and function of these connections are largely determined by the child's early experiences, thus supporting the theory that stimulation affects early brain development. The number of synapses peaks to around 1,000 trillion before a child reaches one year old, decreases to around half by age 10 and either decreases or increases towards adulthood. These synapses work on the principle that if the connection is not necessary, then it will be lost. (Jumpstart Tulsa, 2009).
Although the lower portion of the brain is well developed at birth to support a child's initial survival, the upper portion is not. This portion contains a brain structure called the cerebral cortex which is responsible for human attributes such as memory, attention, perceptual awareness, thought, language, and consciousness. Synaptic connections in the cerebral cortex are developed and peaks during elementary school age. Beginning middle school age to adolescence, the number of synapses decline to adult levels (Zero to Three, 2009).
It is thus theorized that stimulants or the lack thereof, which are received prior to adulthood, determine all the abilities and capabilities of each individual, or the lack thereof.
Language Development
Some of the major theories in language development are the behaviorist theory, the nativist theory and the interactionist theory.
According to B.F. Skinner, the father of behaviorism, language is learned through reinforcement and imitation. According to the behaviorist theory, like any other behavior, language has to be taught and positively reinforced otherwise, it cannot be learned. This theory is not widely accepted because it does not consider the biological aspects of language acquisition. According to Chomsky and his nativist theory, children have an innate language acquisition device and that it is in their nature to learn a language because of the presence of language areas in the brain, the sensitive period for language development and a child's ability to invent a new language system. While there is much evidence supporting the theory, not all researchers support it because mere hearing a language on the radio or on TV is not enough to learn the language. The interactionist theory is a combination of the behaviorist and nativist theories. It takes into consideration both innate capabilities of the brain for language development as well as behavioral responses to the need to understand and be understood by others, thus producing the result of learning how to interact using a language (Knudtzon, 1998).
From the description of the three theories above, the interactionist theory would be the most effective, in this author's opinion.
Works Cited
Jumpstart Tulsa. Brain Development. 2009. 31 May 2009 .
Knudtzon, Kendra Lynn. Language Development in Children. 7 May1998. 31 May 2009 .
Zero to Three. Frequently Asked Questions. 2009. 31 May 2009 . Read More
Share:
Tags
Cite this document
(“Cognitive and Language Development Essay Example | Topics and Well Written Essays - 500 words”, n.d.)
Cognitive and Language Development Essay Example | Topics and Well Written Essays - 500 words. Retrieved from https://studentshare.org/miscellaneous/1508332-cognitive-and-language-development

lu
lueilwitzsterli added comment 5 months ago
Student rated this paper as
I didn’t know how to start my essay. "Cognitive and Language Development" helped me out a lot! Especially the list of resources was valuable.

CHECK THESE SAMPLES OF Cognitive and Language Development

Referential Theory becomes convoluted when you consider that not all words have direct relations to real-world entities. For instance, what would be the referent for a word like ‘the’? Linguists argue that ‘the’ isn’t necessarily a word that...

When it comes to the cognitive development of children, the name of Piaget is und...
7 Pages(1750 words)Assignment
sponsored ads
Save Your Time for More Important Things
Let us write or edit the essay on your topic "Cognitive and Language Development" with a personal 20% discount.
GRAB THE BEST PAPER

Let us find you another Essay on topic Cognitive and Language Development for FREE!