Comments (0)
Add to wishlistDelete from wishlist
Cite this document
Summary
Gender and crime are two aspects which are subject to recent studies and researches in the filed of criminology in order to determine their relationship to each other. It may seem difficult to analyze and interpret these studies but give the data from crime statistics which may pave the way for establishing the correlation between crime and gender…
Download full paperFile format: .doc, available for editing
HIDE THIS PAPERGRAB THE BEST PAPER96.2% of users find it useful 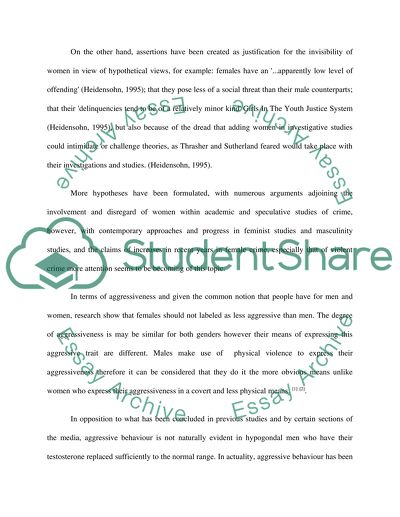 Extract of sample "Gender and Crime"

Download file to see previous pages People often view gender and crime issues using the usual stereotype of men being stronger than women and having higher tendencies to be more aggressive compared to women. This concept of masculinity and femininity requires careful scrutiny of facts and empirical data to support the idea.
It has only been recently that criminologists and sociologists keenly looked into and considered studying about gender and crime. (Heidensohn, 1995). The topic has been discussed only in passing in various works such as Merton' theory of anomie and the deliquency of females are considered to be similar to those of men. A major reason for this inattention to females in crime and deviance is because of the perspective that female crime has somewhat been exclusively been dealt with by men, from regulating through to legislation, and that this has continued through into the theoretical approaches, quite often portraying what could be considered as a one-sided view, as Mannheim suggested Feminism and Criminology In Britain (Heidensohn, 1995).
On the other hand, assertions have been created as justification for the invisibility of women in view of hypothetical views, for example: females have an '...apparently low level of offending' (Heidensohn, 1995); that they pose less of a social threat than their male counterparts; that their 'delinquencies tend to be of a relatively minor kind' Girls In The Youth Justice System (Heidensohn, 1995), but also because of the dread that adding women in investigative studies could intimidate or challenge theories, as Thrasher and Sutherland feared would take place with their investigations and studies. (Heidensohn, 1995).
More hypotheses have been formulated, with numerous arguments adjoining the involvement and disregard of women within academic and speculative studies of crime, however, with contemporary approaches and progress in feminist studies and masculinity studies, and the claims of increases in recent years in female crime, especially that of violent crime more attention seems to be becoming of this topic.
In terms of aggressiveness and given the common notion that people have for men and women, research show that females should not labeled as less aggressive than men. The degree of aggressiveness is may be similar for both genders however their means of expressing this aggressive trait are different. Males make use of physical violence to express their aggressiveness therefore it can be considered that they do it the more obvious means unlike women who express their aggressiveness in a covert and less physical means. [1] [2].
In opposition to what has been concluded in previous studies and by certain sections of the media, aggressive behaviour is not naturally evident in hypogondal men who have their testosterone replaced sufficiently to the normal range. In actuality, aggressive behaviour has been linked with hypogonadism and low testosterone levels, and it would seem as though supraphysiological, low levels of testosterone, and hypogonadism cause mood disorders and aggressive behaviour, with eugondal/normal testosterone levels being important for mental well-being. Testosterone depletion is a normal consequence of aging in men. One consequence of this is an increased risk for the development of Alzheimer's Disease. In other words, testosterone has a calming effect on men. Testosterone may not be associated with crime and aggressive be ...Download file to see next pagesRead More
Share:
Tags
Cite this document
(“Gender and Crime Essay Example | Topics and Well Written Essays - 2250 words”, n.d.)
Gender and Crime Essay Example | Topics and Well Written Essays - 2250 words. Retrieved from https://studentshare.org/miscellaneous/1508286-gender-and-crime

CHECK THESE SAMPLES OF Gender and Crime

Brott argues that a large percentage of the writers have mainly focused on male protagonists and the few that have touched on women’s issues do so from a negative point of view (Brott 23). Consequently, men’s reputation has been tarnished to a point where it is difficult to repair. Previous attempts to rectify the transgression have not resulted in significant outcomes for the oppressed gender.
In most societies, the most significant and effective method of passing on values and perceptions rests in reading and telling stories captured in children’s literature. An ordinary experience for many kindergarten children involves listening to stories told from books, most of which are enhanced with illustrations. T...
8 Pages(2000 words)Literature review
sponsored ads
Save Your Time for More Important Things
Let us write or edit the essay on your topic "Gender and Crime" with a personal 20% discount.
GRAB THE BEST PAPER

Let us find you another Essay on topic Gender and Crime for FREE!